Michael Schacht, 70 years old, is a typical German saver. Risk-averse, the clothing-shop owner kept the equivalent of $300,000 in a local bank in a small town near Hamburg.

Then, earlier this year, Mr. Schacht’s bank told him it wanted to charge him a negative 0.5% interest rate to hold his money.

Furious, Mr. Schacht did something he never considered: He put it all in the market. His portfolio includes investments in stocks and corporate bonds from Europe and elsewhere through funds, plus gold and silver.

“I don’t want to make lots of money, I just want a low-risk investment that provides a reasonable return on capital, like 2%, 4%,” Mr. Schacht said. “That has always been realistic in the past.”

This is an example of how investors are being forced to speculate. Negative interest rates are an obvious tax on savers so they have no choice but to buy riskier assets. It is a choice between guaranteed modest losses or potential gains with the added scope for bigger losses.  This is particularly acute in places like Germany where retail investors don’t generally invest in the stock market.

The cult of bonds and coupon clipping is much more pronounced in Europe than it is elsewhere. At my first job in London, I sat next to a former bond trader from Deutsche Bank. It was 2000 and the Nasdaq was in the process of crashing. He told me there was an adage on the trading floors of London which marked a peak of speculative frenzy “Even the Germans are buying”.

Conservative investors have to be so disappointed with the returns on their traditional assets and the confirming evidence so obvious for the bull market that they are encouraged to buy that they are usually the last hold outs. It is these late comers who buy close to full valuations and sell at the bottom that epitomise the losers in a crash. They swear off ever investing in equities again and it takes a generation for them to come back. 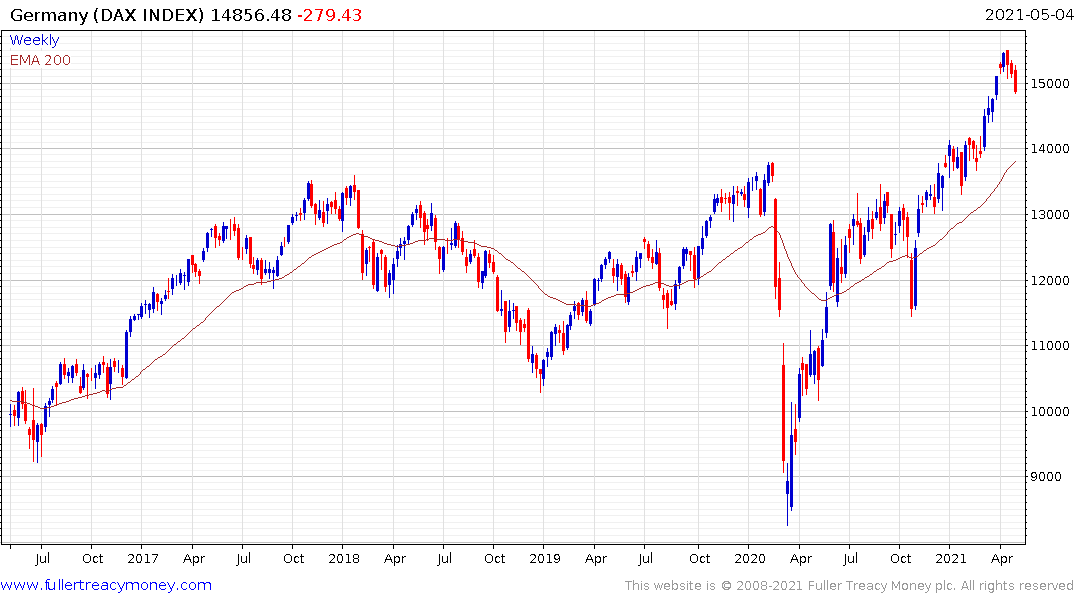 The DAX Index is currently unwinding its short-term overbought condition but a sustained move below the trend mean would be required to question the medium-term uptrend. Meanwhile the higher risk portion of the market is much more susceptible to selling pressure.