Cash on Cash, Gold on Gold
Comment of the Day

Cash on Cash, Gold on Gold by Eoin Treacy

For most of my 40 year career, analysts have mocked poor management in the mining business. The wisdom is that gold mines -perhaps with the exception of royalty or streaming financiers- are low quality, cyclical investments that only work when the cycle is right. Management doesn’t matter. The gold price -and luck with your timing- do. So I was intrigued by this chart. After decades of devouring investors capital for capital-intensive projects and surviving on shareholder bounty, the current generation of gold miners have finally got the message. They have done so when most of their all-in, sustainable costs cluster around USD 1,000 an ounce. Gold trades near USD 1800. Free cash flow yield (FCFY) measures the free cash flow (net profits plus depreciation less annualized capex) as a percentage of a company’s market value. It can be compared to the yield on a bond or a cash deposit. Gold mining, handcuffed by capital constraints after years of shareholder abuse, is now the highest yielding sector on the planet, with a FCFY of 7%, roughly double that of the rest of the market. During the last 2001-2012 bull cycle, when most gold shares multi-bagged, they never really got close to cash positivity. This is money -or maybe gold- that can be paid to investors and it is on the increase. In a yield deprived, inflationary age, is this not El Dorado?

Here is a link to the full note.

It is going to take a long time to shake the reputation miners’ earned for being capital destroyers. The move to positive free cash flow yields is indeed positive and is helping to support the shares of the major miners during what has been a lengthy correction for the gold price. 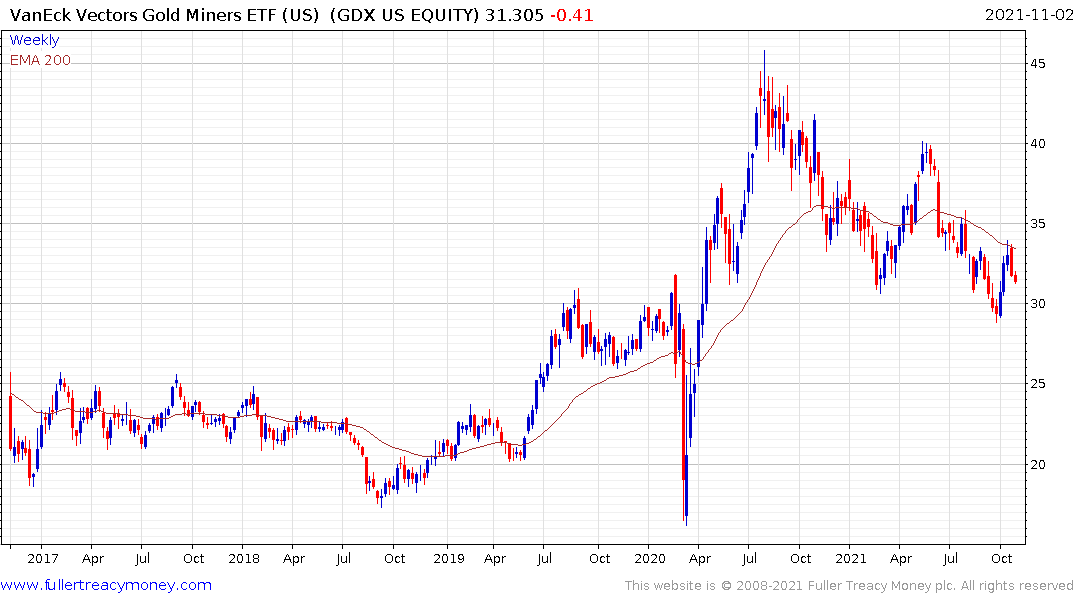 With such a compelling value proposition, investors are obviously questioning why have the shares not done better? The primary reason is gold hasn’t gone anywhere despite the fireworks in other parts of the commodity market. These kinds of lengthy medium-term corrections are not unusual in gold. The majority of gains in the first two thirds of the last big bull market occurred in short sharp bursts higher. That suggests gold miners are in a strong position to offer a high-beta play on gold when it next pops on the upside.

The big challenge for the sector is there have been no big new gold discoveries in the last four years. In future, the sector will likely have to either rely even more on technology, like advanced satellite imagery, to find promising prospects. As surface reserves have been exhausted, many of the largest operations have begun to move underground. That is much more capital intense so either existing miners will engage in more M&A or they will need to spend that free cash flow on building.