Canadian Dollar is pick of commodity currencies
Comment of the Day

Canadian Dollar is pick of commodity currencies by Eoin Treacy

The Canadian dollar may fare better than other commodity currencies in the remainder of the year as resurgent growth spurs the nation’s central bank to wean the economy off stimulus.

While already perched near multi-year highs, the loonie still has potential to add to its gains given the surge in commodity prices and an economy that is forecast to grow at the fastest pace in several decades. And with the Bank of Canada having unveiled a scale-back of government debt purchases while accelerating the timetable for a possible interest-rate increase, money markets have lost no time in pricing an aggressive rate trajectory.

Other G-10 commodities, too, have fared well this year. While Norway’s central bank is likely to raise rates sooner than its Canadian counterpart, the differential between 10-year yields in the two nations is a considerable hurdle for the krone to overcome. The Australian and New Zealand dollars, meanwhile, face considerable headwinds to climb from current levels given that they are both overvalued from a fundamental perspective, especially against a backdrop where their central banks are likely to stay accommodative for a long time yet.

The Canadian dollar also stands out in relation to its peer group by its muted volatility, which reduces the overall risk in a portfolio setting. All told, it’s been plain sailing for the loonie so far this year. If the current macroeconomic backdrop prevails, 2021 may well turn out to be annus mirabilis for the currency, not only against its commodities peer group but also the wider G-10 complex.

Canada has a long history of fostering upstart companies that come to dominate their respective niches during the prevailing bull market of the time. Nortel Networks, Blackberry, Canopy Growth Corp, Brookfield Asset Management and Shopify all come to mind. Amid the significant media attention these companies receive, it is worth remembering that the oft-maligned extractive sector forms the basis for the country’s wealth and stability. 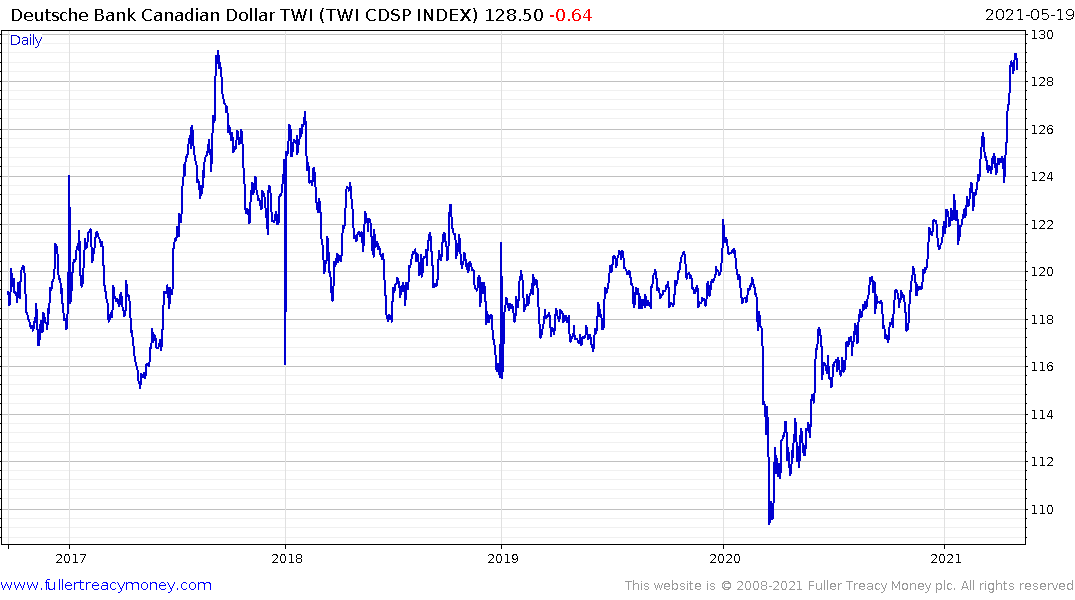 The Deutsche Trade Weighted Canadian Dollar is testing the upper side of a five-year base formation.

The recovery in industrial resources prices in everything from lumber to copper, alumina and potash represents a significant tailwind for the Canadian economy as it emerges from the pandemic deep freeze. 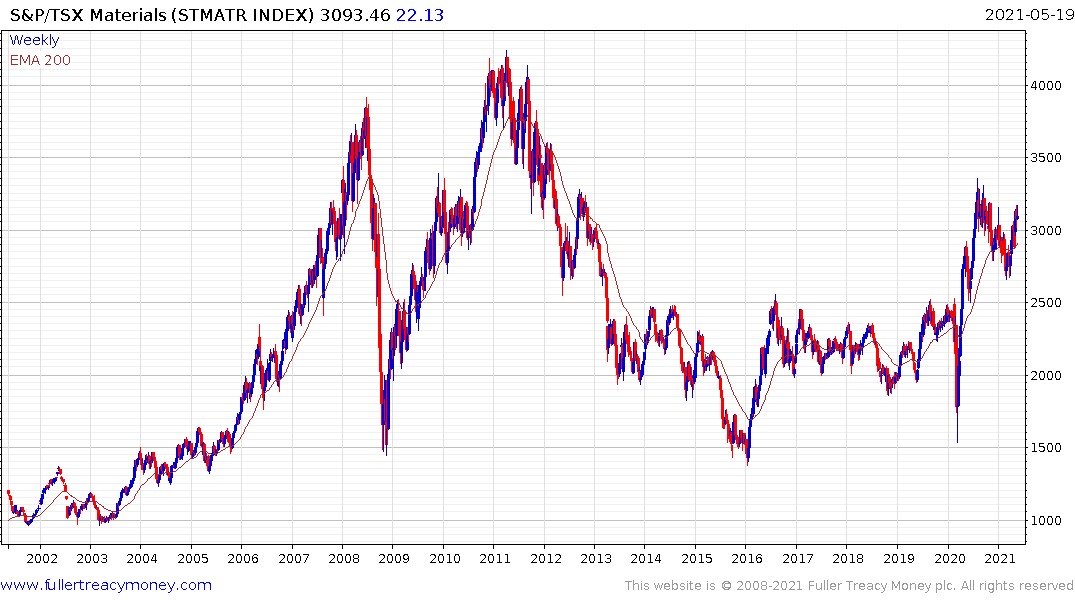 The S&P/TSX Materials Index is heavily weighted by gold miners and shares a high degree of commonality with that sector. 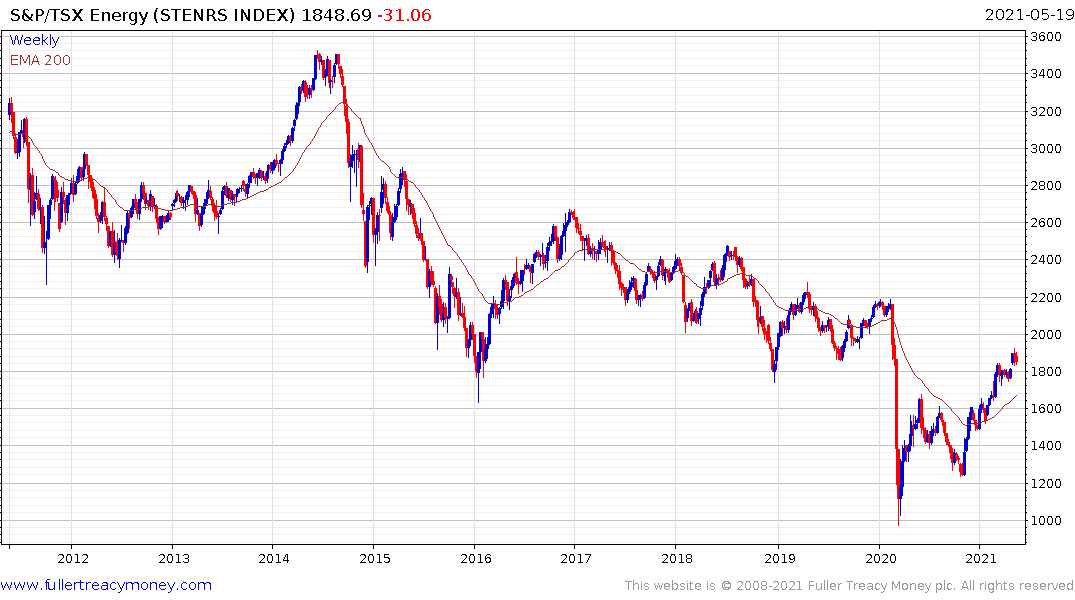 The S&P/TSX Energy Index is heavily weighted by pipelines at almost 50%. The Index remains on a recovery trajectory but is approaching lateral resistance at the lower side of the overhead trading range and the psychological 2000 levels. 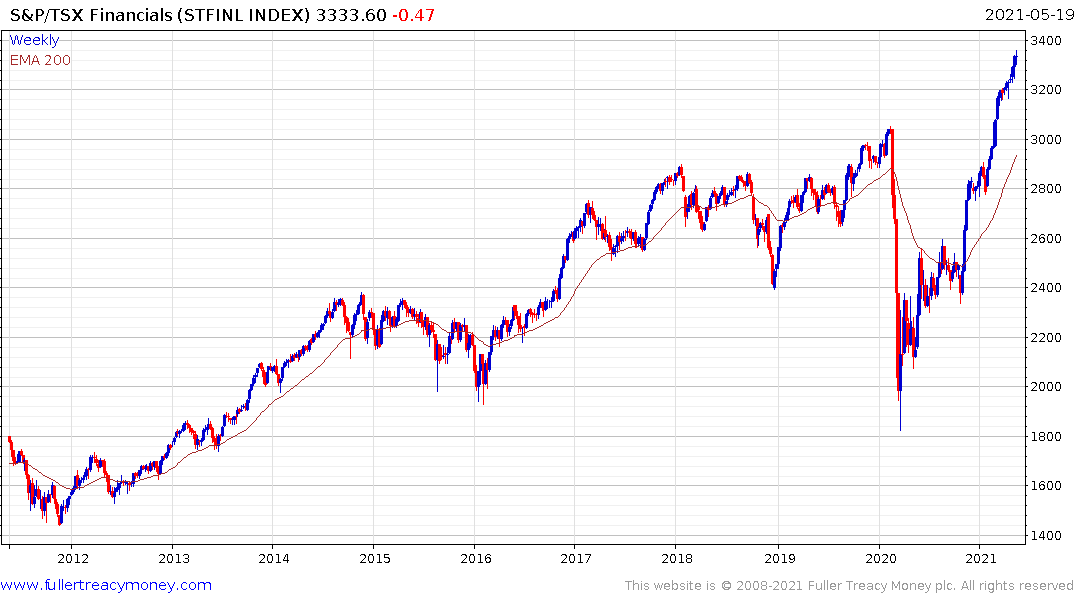 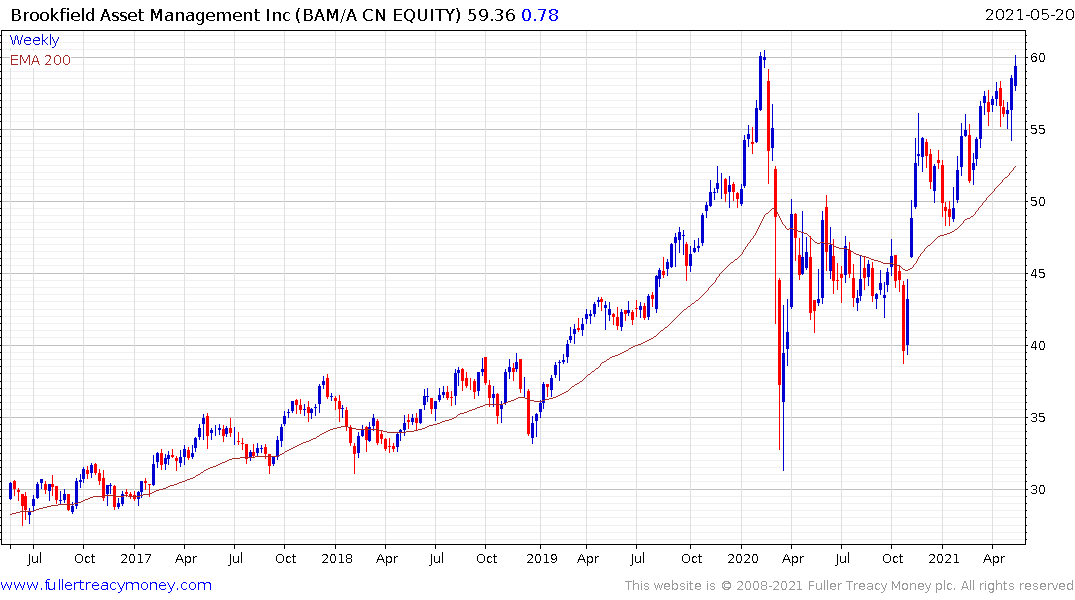 The S&P/TSX Financials Index continues to outperform as it extended the breakout to new all-time highs. 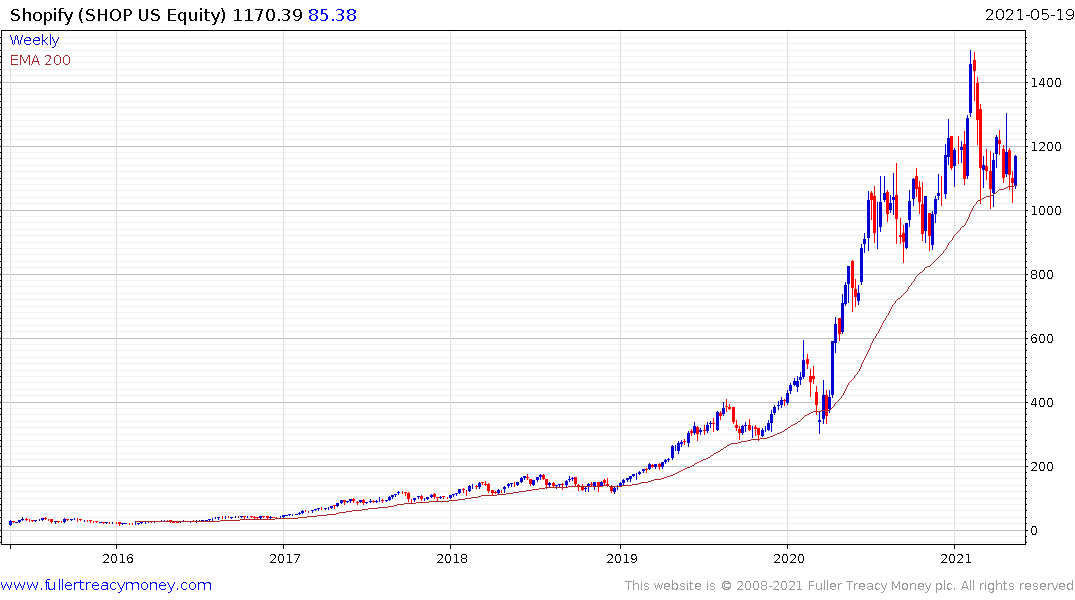 Shopify has been ranging for a year but is currently firming from the region of the trend mean.