Can Low Rates Explain High Stock Prices? Not So Fast
Comment of the Day

Can Low Rates Explain High Stock Prices? Not So Fast by Eoin Treacy

One such model was proposed in a 2017 article in the Journal of Portfolio Management by Research Affiliates founder Robert Arnott and several colleagues. They found that P/E ratios tend to be lower when real interest rates, or those adjusted to remove the effects of inflation, are either too high or too low. The “sweet spot,” as far as P/E ratios are concerned, is when real rates are between 3% and 4%. Since real rates currently are below 1%, Mr. Arnott’s research provides no support for the above-average current P/E ratio.

In an email, Mr. Arnott poses a rhetorical question for those who believe that today’s low interest rates should automatically translate into higher P/E ratios. If that were the case, “then why don’t negative real interest rates in Europe and Japan justify even higher valuation levels [than in the U.S.]?! Instead, these markets are priced 20-40% cheaper than the U.S.” as judged by their P/E and CAPE ratios, he writes.

Taking historical comparisons as a basis for a world with trillions in negative yielding bonds does not make sense. Once interest rates go below zero it sets of a stampede for yield among yield-to-worst investors and creates a momentum driven trade in the opposite direction for traders. The big difference between Europe and Japan compared to the USA is urgency.

The valuation dispersion between Europe and Japan versus the USA is almost completely explained by technology companies and the success of the mega-cap sector. The fact negative yields are concentrated in Europe and Japan creates urgency to get into better yielding assets, whether those are equities or high yield bonds or a currency with a wider interest rate differential. 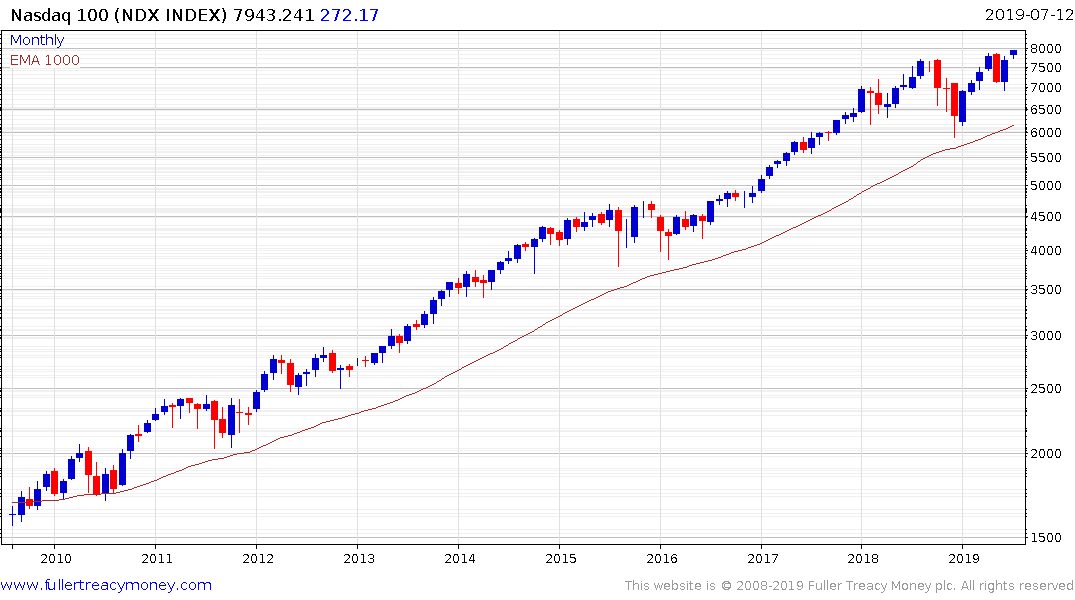 The defining difference in this bull market has been the transition of high cyclical businesses into the subscription business model which smooths out cashflows and brings predictability. That offers both growth and reliability of cashflow which is exactly what investors want against a background of low rates.