Meanwhile, in California, while there wasn’t much immediate concern about these recent events, I was surprised by the uniformity of the fatalistic narrative about the long-term outlook that seemed to prevail during several of my meetings. The basic premise is that whether Trump does or does not weather the latest impeachment storm, socialism is coming. Consider the following:

(1) Socialism. Sooner or later, there will be a wealth tax, according to this narrative, and the wealthy will willingly pay it for the sake of social stability. It will happen sooner if Warren is in the White House in 2021.

In this scenario, the wealthy are getting wealthier thanks to technological innovation. That allows them to make more of the goods and services we all consume with less and less labor. That means that more and more people will be forced out or leave the labor force if they can’t adapt to the brave new world.

(2) UBI. To maintain social stability, the government will have to provide a Universal Basic Income (UBI) that would allow people to pursue whatever path they find rewarding in life, whether it be working for a living, writing poetry, or mastering miniature golf.

(3) Taxes and MMT. To pay for all this, income taxes on the rich will have to be raised and supplemented with taxes on their wealth. Furthermore, just as Modern Monetary Theory predicted, the Fed will keep interest rates near zero and buy lots of Treasury bonds, enabling the fiscal authorities to run larger and larger deficits to fund their socialist schemes and green new deals.

(4) Democrats’ agenda. Of course, none of the above is theoretical. Several of the contenders to be the next Democratic nominee for president are running on minor variations of this socialist agenda.

Some of my friends in California, who tend to be conservative, aren’t endorsing this agenda. Rather, they seem resigned to it. They figure that following the next financial crisis, the socialists will have all the plans to make life better for all who have been on the losing side in the brave old world. In the brave new world, health care will be free, and so will all education. This may require some of us to be less free to pursue our selfish interests such as building a business, earning more money, and accumulating wealth.

(5) Next crisis. According to a few of the accounts I met, the next financial crisis is coming sooner rather than later. These folks tend to be involved in commercial real estate as well as private equity and debt. They told me that they are seeing “crazy stuff” happening in these markets that is very reminiscent of the excesses that led to the Great Financial Crisis. Commercial real estate values are soaring, as investors are coming to believe that their financing rates will remain near historical lows forever. Credit quality is rapidly deteriorating, as bonds and leveraged loans are issued with fewer, if any, covenants.

One fellow in Newport Beach, who has 30 years of experience as a derivatives trader, believes that bonds with negative yields may be symptomatic of the proliferation of new derivatives that convert them into positive returns. Such alchemy is reminiscent of how derivatives transformed subprime mortgages into triple-A CDOs and CDSs.

(6) Happier story. In several of my meetings, I offered a more optimistic alternative scenario to the one outlined above. The key is productivity growth.

The one thing we know is the consensus’ in markets seldom reach the worst or best predictions of investors. The rationale for MMT is compelling. The US government is already running a $1 trillion deficit in a boom and needs to pay for that with a large issuance of bonds. Since this is occurring before a crisis, investors logically conclude that trend has to continue in a linear manner. However, we have ample evidence of outcomes eventually working out much differently in reality.

No one assumes there is going to be inflation. It is one of the most highly contrarian investment conclusions in the world today because there is no evidence of it and global economies are slowing. However, the trade war and its tariffs are raising costs for just about everything. Wage demand growth is rising everywhere and the companies are increasingly regaining pricing power. That is a more powerful trend in China today than it is in the USA or especially Europe but it has to start somewhere. Perhaps we get the MMT first and the inflation second but the rational argument is you can’t keep printing indefinitely without causing inflation. 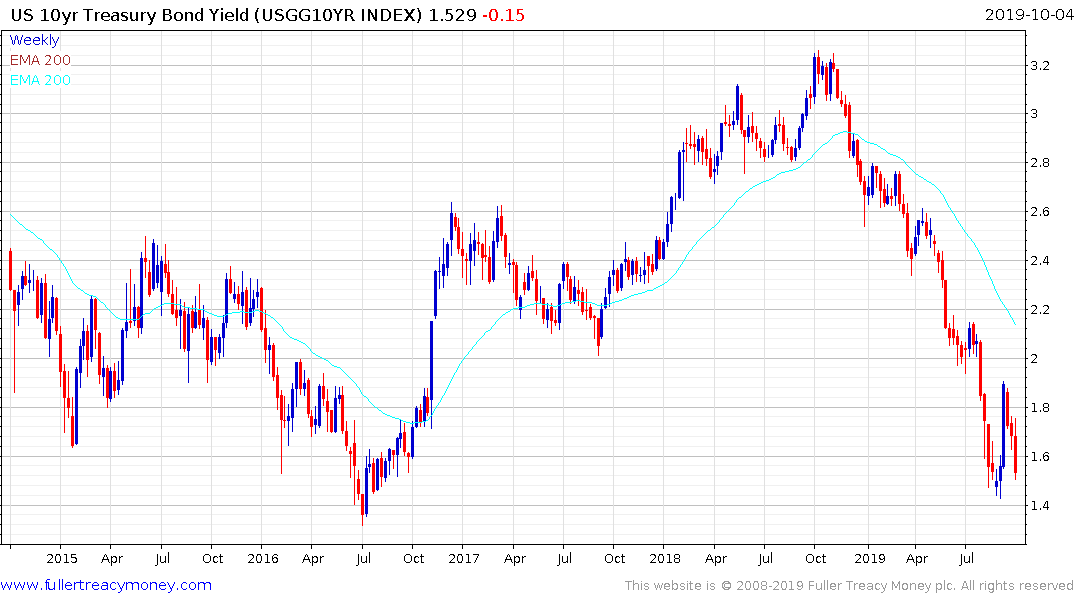 US 10-year Treasuries are back testing their lows following the large upward dynamics posted four weeks ago. The big question now is whether that dynamic will be enough to quell bond buying in the near-term and confirm more than a short-term peak. 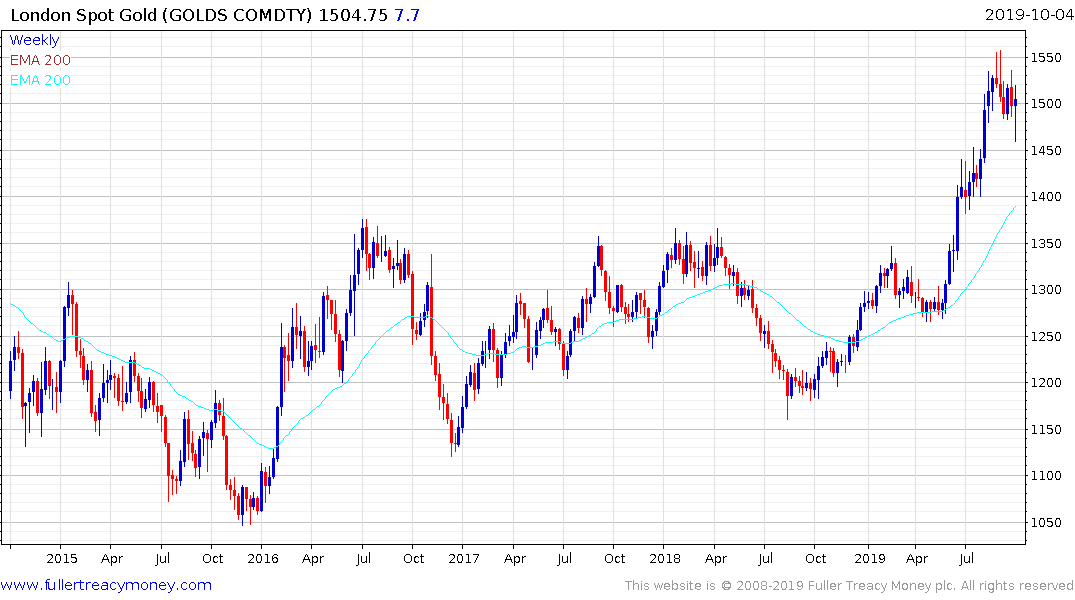 Golds remains has been ranging with a mild downward bias, around the $1500 level for the last month. Following a breakout of this magnitude from the base some pause and consolidation is to be expected and a sustained move below the trend mean would be required to question medium-term scope for continued upside.