Buybacks: Another Name For Quality
Comment of the Day

Buybacks: Another Name For Quality by Eoin Treacy

Many investors and corporate managers believe repurchases lift share prices by boosting earnings per share--they're "accretive" to earnings, in the turgid parlance of business. The idea is that after a buyback the company's cash flows remain unchanged but are then divided among fewer shares, making each share more valuable. It may very well be that this effect is a self-fulfilling prophecy. However, theory indicates that whether a repurchase boosts earnings per share has no bearing on whether the repurchase actually adds value. The only time buybacks make sense is when a company's shares are trading at below intrinsic value and managers have no better opportunities to invest in.

Of course, the world doesn't work like this. Buybacks usually are greeted with applause by the markets, for good reason. Studies indicate the market assigns less than $1 of value for each $1 of excess cash a company holds, likely because investors think managers tend to destroy value by empire-building. Buybacks (and dividends) signal to the market excess cash on hand as well as future cash flows will be returned to shareholders if high-enough returning investments can't be found.

OK, but this story doesn't explain why companies that repurchase shares go on to experience years of outperformance--shouldn't the market quickly price in the information revealed by the share buyback?

?There are lots of theories as to why this is the case, few of them persuasive. I think it's simple: Companies that cannibalize themselves tend to be more profitable and less leveraged. They have moats. Investors seem to underreact to the information revealing long-run profitability.

The Powershares Buyback Achievers ETF (PKW) has been a notable outperformer relative to the wider market since 2009. Investors are happy to see buybacks because the supply of shares decreases so their holdings become more valuable. As shares of the respective companies become collector’s items, they become more appealing and the potential for a momentum move increases. 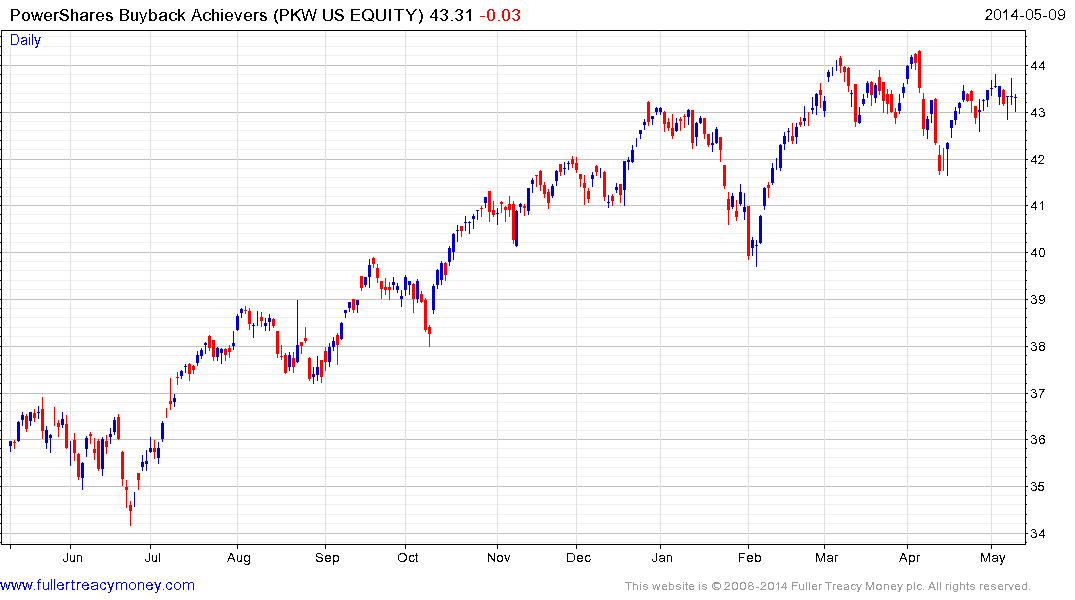 It has been my contention that corporations have been among the greatest beneficiaries of quantitative easing since they have seen their cost of capital slashed. Many have engaged in balance sheet optimisation by refinancing more expensive debt, borrowing more to increase dividends and buyback shares. Many investors I speak to testify that they are still sitting on a lot of cash which raises the question as to which demographic is the marginal buyer in what has been a powerful cyclical bull market. Perhaps it is the corporations themselves. 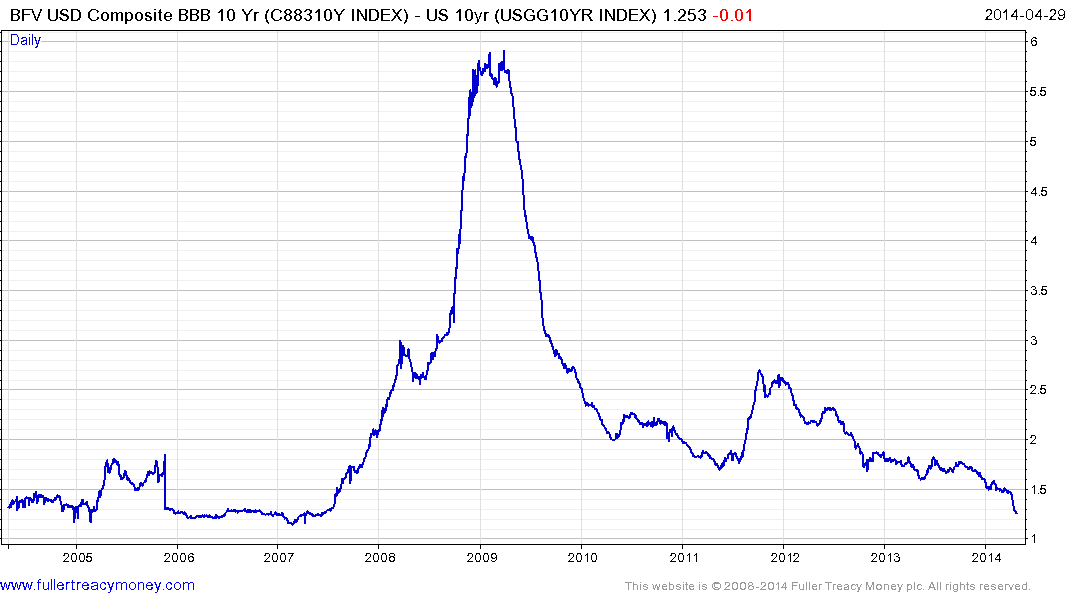 Demand for yield has seen 10-year BBB spreads return to levels last seen in 2007 amid record supply and declining lending standards.  We can at least conclude that a great deal of good news has already been priced in. In the pre-credit crisis period, spreads stayed around these levels for quite some time but did not get much tighter than they are right now. Any meaningful expansion in spreads is likely to have a knock-on effect for companies funding buybacks with new debt.

PKW posted a downside key day reversal in early April and continues to range below the peak. A sustained move below $41 would represent a major loss of uptrend consistency.