As the private equity industry gathers near record sums of assets, institutional investors aim to make big allocations to fewer firms with a wide range of products. Today’s deal creates such a one-stop-shop: it bolsters the credit business of Brookfield, which has traditionally focused on real estate, and provides Oaktree, a specialist in distressed debt, exposure to assets that thrive outside turbulent economic times.

“We had difficulty, up until now, meeting the strict terms of some of those mandates,” Brookfield Chief Executive Officer Bruce Flatt said in a phone interview. “Very few firms in the world are able to do that.”

Oaktree co-Chairman Howard Marks said in the interview that the two firms mesh “culturally and in terms of product lines without competing and overlapping.”

Warren Buffett has been preaching for years about the merits of owning a piece of a business and private equity investors have been listening. Private equity has taken private exactly the same kinds of companies Buffett favours, which are generally those with niche businesses, strong cashflows and low leverage.

They have often then bumped up debt to get the target to pay for its own acquisition so that when it is eventually relisted leverage ratios have been ratcheted higher and the private equity firm gets paid again. Alternatively, they focus on acquiring income producing assets like real estate and infrastructure at favourable rates which can accrue value over time. The net effect is that the range of assets still available in public markets is reduced.

The private equity sector has been accumulating cash during the era of low interest rates at a pace that dwarves anything seen previously. That has been possible both through the availability of credit as well as the asset price inflation driven by extraordinary monetary policy. 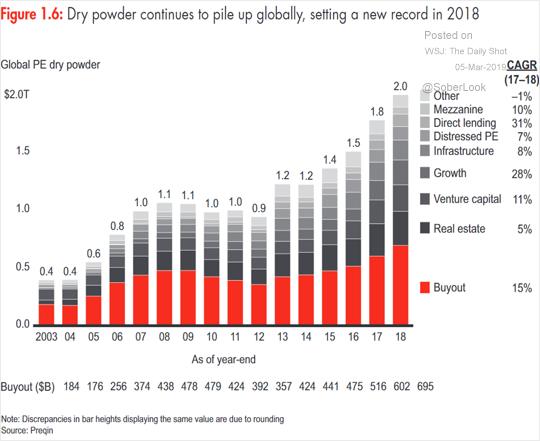 With $2 trillion set aside for buyouts, the private equity sector will be a potent source of demand during the next downturn. The clear existence of that significant pool of capital waiting to be deployed could be a mitigating factor in the size of a future pullback which should reduce the potential for a lengthy bear market.