Henderson forecasts authorities will steer the currency to as strong as 2 per dollar this year, reaching that level the first time since May.

Analysts at Citibank and BBVA say the central bank is using its intervention program of currency swap auctions to support the real and combat inflation by limiting import price increases. Brazil has been selling as much as $200 million in daily foreign-exchange swaps under a program announced in December. The currency surged the most in emerging on April 4 when the central bank resumed rolling over the contracts.

“At this moment, the only ally the central bank has to act in the fight against inflation is the appreciation of the currency,” Mario Toros, a partner at Ibiuna Investimentos and a former central bank monetary policy director, said at an event in Sao Paulo on April 10.

BRL 2.4 has been an area of support for the Real on three separate occasions since 2009 and it strengthened from the region again from early February. It has now pushed through the 200-day MA for the first time since 2011 and a sustained move by the US Dollar above BRL2.4 would be required to question potential for additional support building. 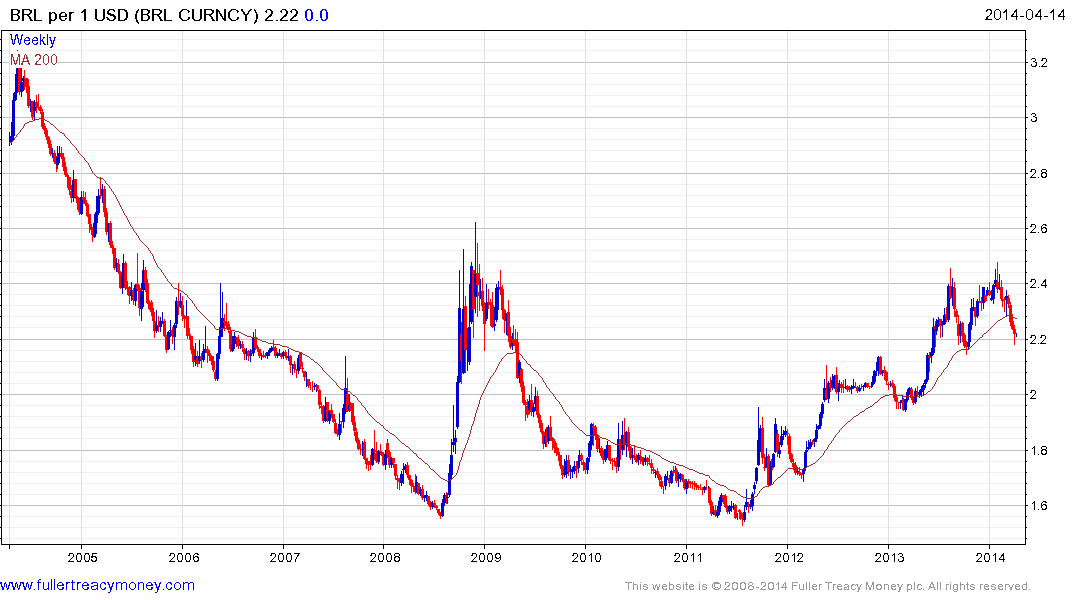 The weakness of the currency has been one of a number of factors which have weighed on investor sentiment towards Brazil over the last few years. The bankruptcy of OGX is an additional reason but this is no longer reflected in the weighting of the Bovespa Index. 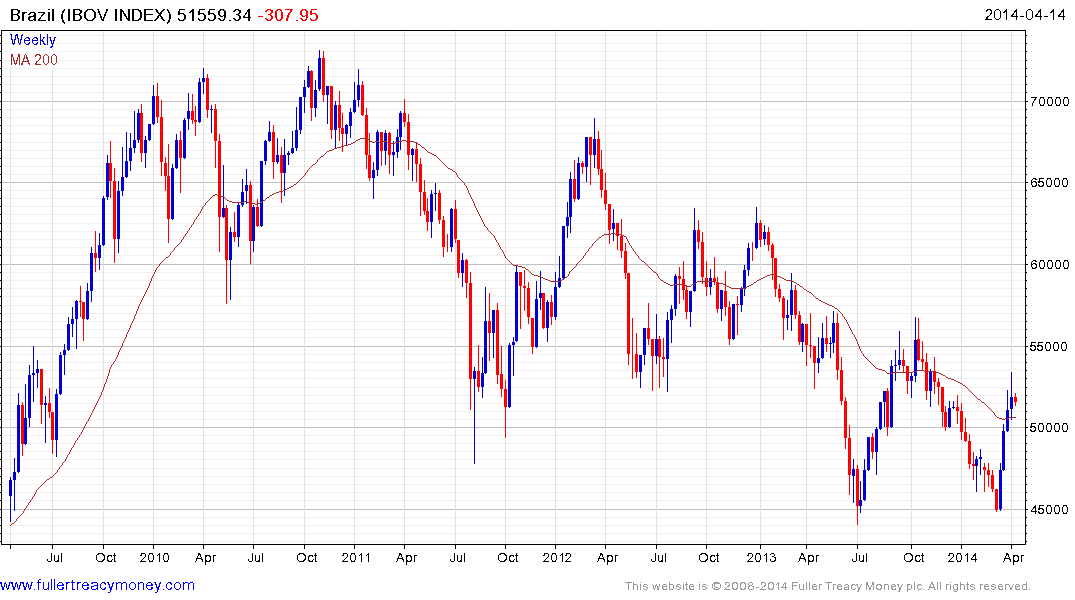 Petrobras’ (Est P/E 7.43, DY 4%) $72.8 billion share sale in 2010 also diluted the Index and its subsequent underperformance has acted as a headwind for the market. At the end of 2013 the Lula (Tupi) field was producing 100,000 barrels of the anticipated 500,000 barrels to be in production by 2020, so we can conclude that at least some of the massive investment in developing this field is coming to fruition. The share remains in a medium-term downtrend. However, it posted an upside weekly key reversal in January and a break in the three-year progression of lower rally highs would confirm a return to demand dominance beyond the short term. 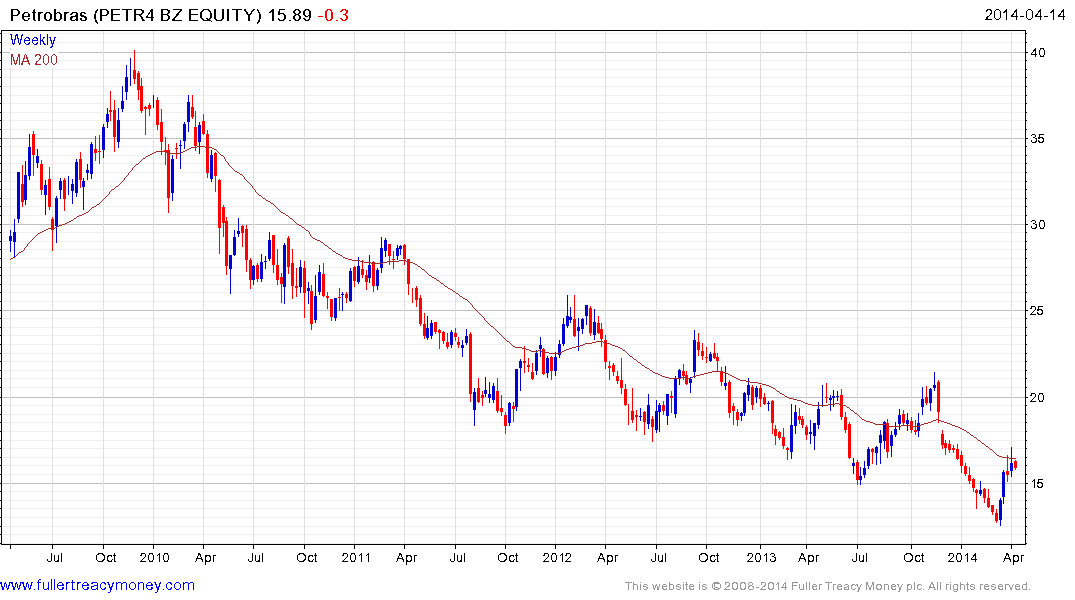 Elsewhere in the commodity complex VALE’s (Est P/E 6.77, DY 5.5%) three-year downtrend has lost momentum near $12.50 and it has rallied to test the region of the 200-day MA. Iron-ore accounted for 73% of revenues in 2013 while nickel is its largest industrial metal market. Therefore the global outlook for steel and industrial metals is likely to be a key influence on the share’s performance. The fact industrial metal prices are firming from generally low levels can be viewed as a positive. 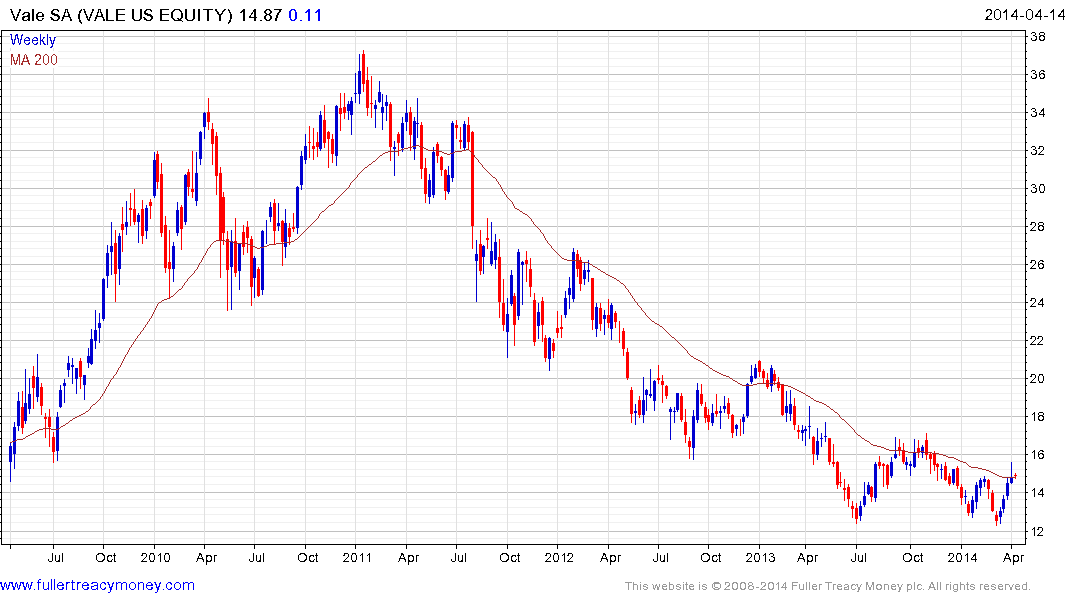 While the Brazilian market is most commonly associated with the commodity complex, the imminent World Cup finals should represent a net positive for the economy now that most of the investment in stadiums has taken place. The outperformance of the banking sector, not least Banco Itau (Est P/E 9.59, DY 3.41%) and Bradesco (Est P/E 9.66, DY 3.13%) suggests that while the focus of attention has been on the underperformance of the commodity sector that there are some internal strengths to the economy worthy of notice. Provided the currency continues to strengthen, the argument that the wider Brazilian market has bottomed is likely to continue to gain credence. 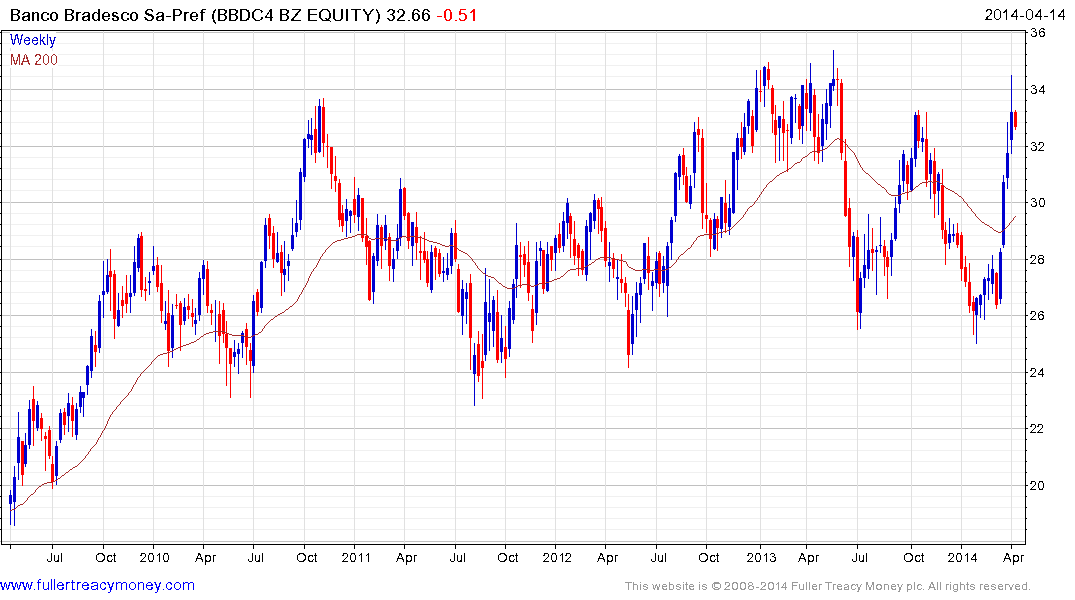 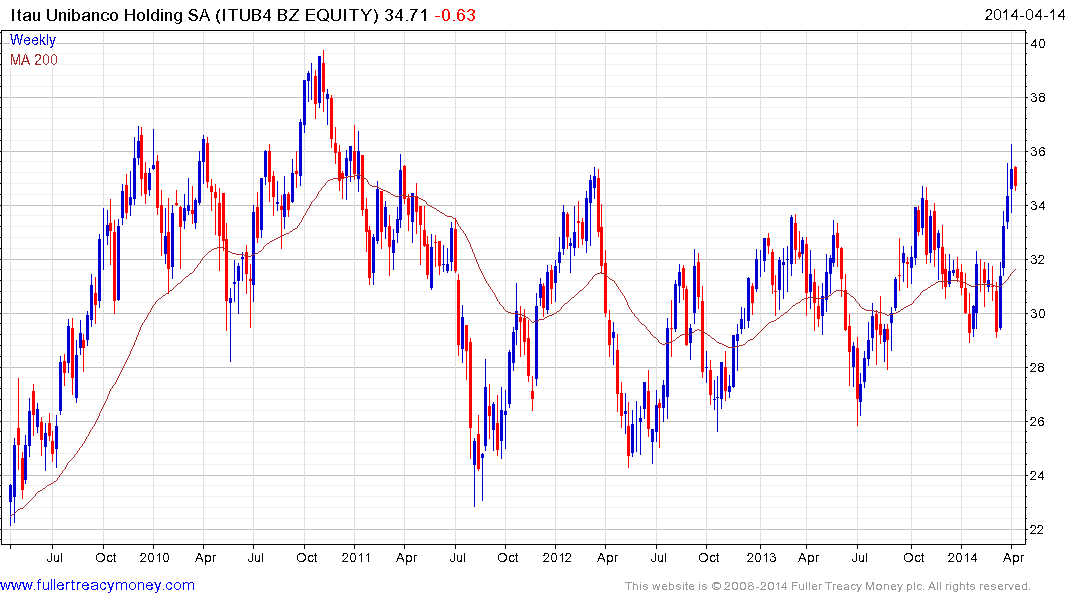