The USDA forecast in Feb. that production would rise to 90m mt from 82 mln last yr

NOTE: The USDA will update its forecasts on March 10.

Argentina may harvest 54 mln mt of soybeans, compared with from 57 mln estimated last month The USDA forecast a crop of 54 mln, up from 49.3 mln last yr

Argentina corn output was forecast at 22.6 mln mt, unchanged from last month and below the 24 mln estimated by the USDA.

Weather conditions were generally favourable for the last few years but 2014 is proving to be an exception with droughts, hard frosts, storms and occasional floods all having an impact on yields.

The deterioration in grain and bean prices between 2009 and 2013 was probably a contributory factor in the upset that took place in the global potash cartel since competition for market share intensified. As prices recover we can reasonably expect demand for fertilisers to improve. 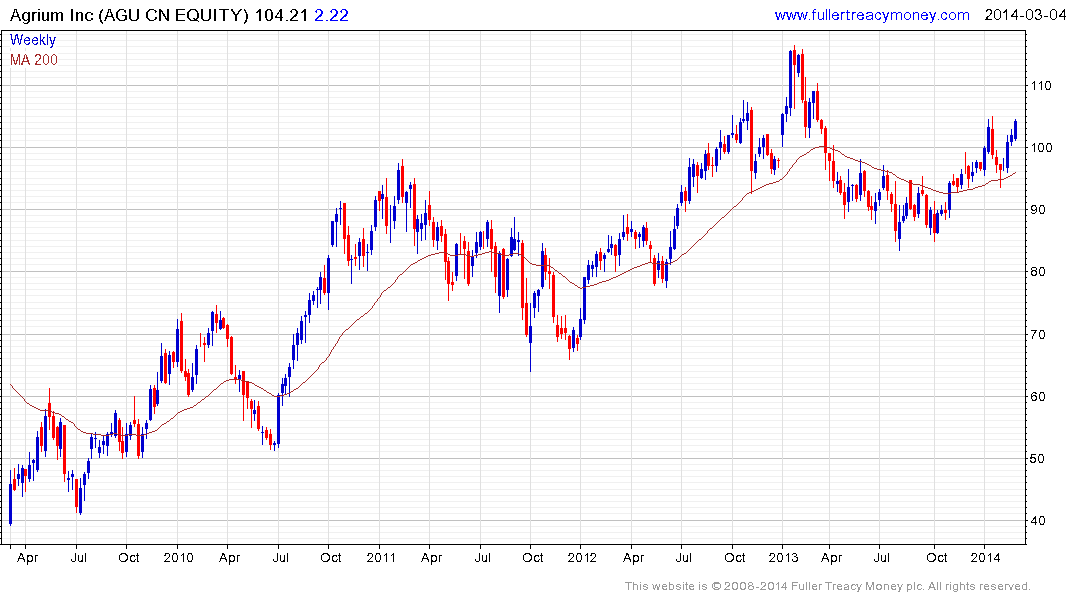 Agrium (P/E 13.22, Est P/E 12.48, DY 3.18%) benefitted from low natural gas prices as feedstock in the production of nitrogen fertiliser and recouped its entire credit crisis decline by early 2013. The share has been prone to some deep pullbacks over the last few years but has held the broad progression of higher major reaction lows. It more recently found support in the region of the 200-day MA from mid-February and a sustained move below C$95 would be required to question medium-term scope for additional upside. 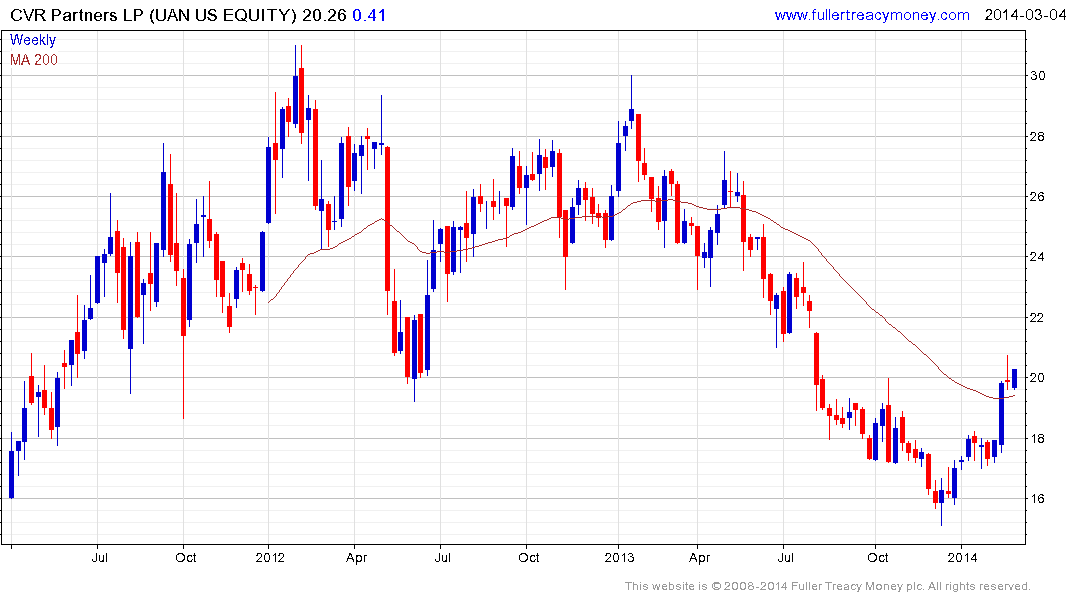 Within the MLP sector, CVR Partners (P/E 12.59, Est P/E 13.17, DY 8.44%) trended lower for most of 2013 but found support in the last week of December and has since rallied to break the medium-term progression of lower rally highs. A sustained move below $18 would be required to question recovery potential. 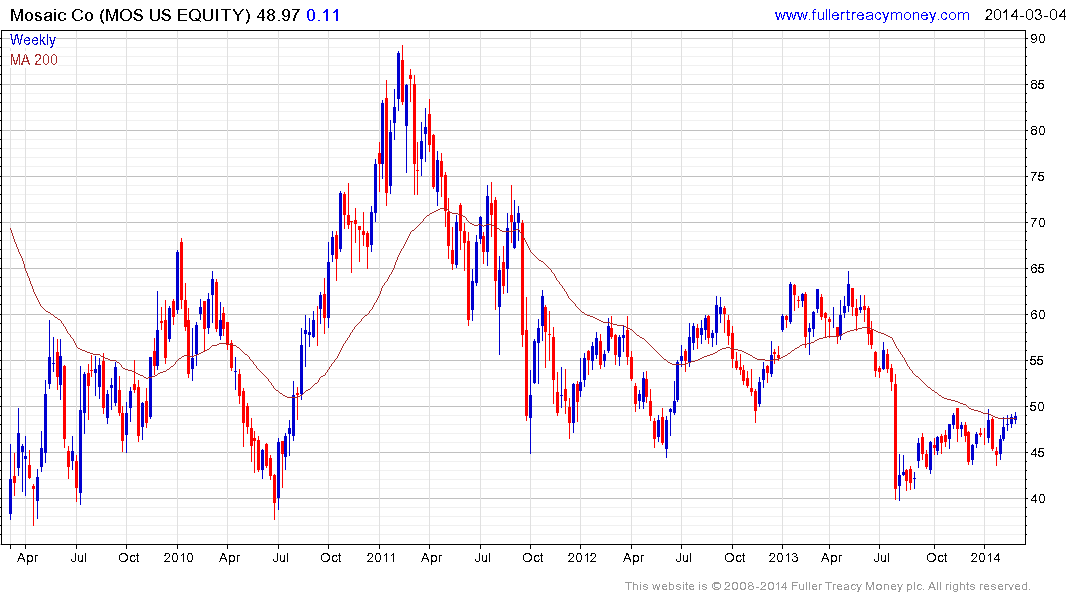 Among the companies impacted by the potash dispute Mosaic (P/E 16.89, Est P/E 17.39, DY 2.02%) has found support in the region of $40 on a number of occasions since 2010 and has been ranging, with an upward bias, above that level since August. It has rallied back to test the psychological $50 area over the last six weeks and a clear downward dynamic will be required to check current scope for a successful upward break. 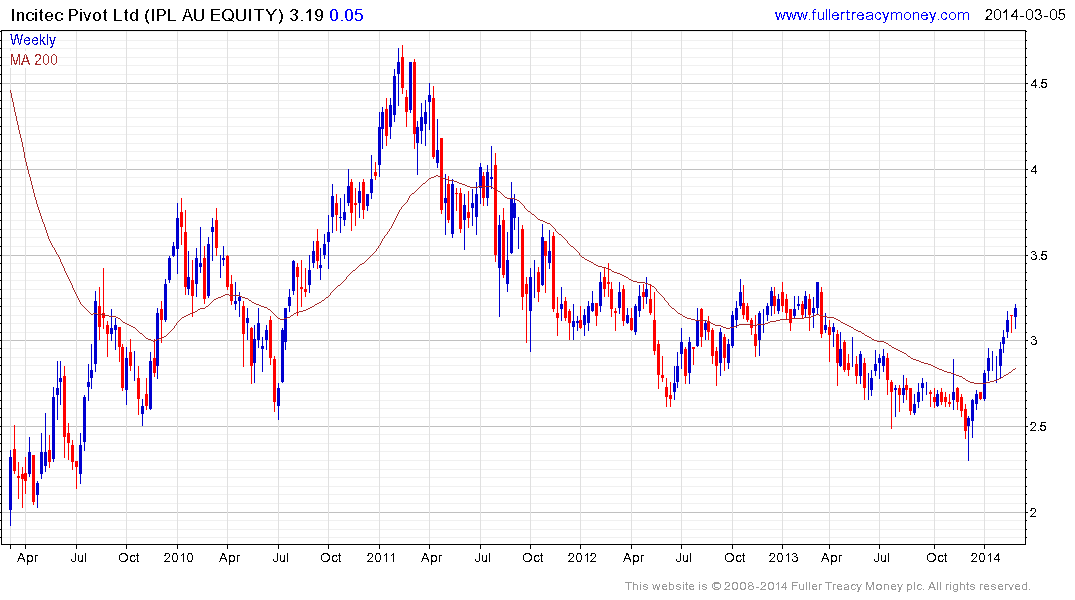 Australian listed Incitec Pivot is also worthy of mention. As a fertiliser and explosives supplier it could potentially benefit both from the revival in demand for nutrients and increasing interest in the mining sector. The share (P/E 13/95, Est P/E 15.49, DY 3.91%) trended lower for nearly three years but found support in December, rallied to break the medium-term progression of lower rally highs and continues to extend the break out.