Brazil Is Back in the Game, New Leader Will Tell Davos Investors
Comment of the Day

Brazil Is Back in the Game, New Leader Will Tell Davos Investors by Eoin Treacy

“Brazil is a hot topic for foreign investors,” said Fabio Alperowitch, portfolio manager and founder of Fama Investimentos, a Sao Paulo-based fund manager. “But no one will change their opinion just because of his speech. Investors’ level of skepticism with emerging markets is still high.”

On his long flight to Davos, Bolsonaro will carry the most crucial plan to tackle a budget deficit that hovers around 7 percent of gross domestic product -- a draft proposal to cut pension outlays and save as much as 1 trillion reais over 10 years. Whether he will attract enough congressional support for the bill when lawmakers reconvene in February will be a make or break moment for his administration.

Bolsonaro will not have to compete for airtime at Davos this year. However, as the above article suggests the big test of whether the enthusiasm which greeted his administration is warranted will be in how successful he is in pushing through reform and combatting corruption. 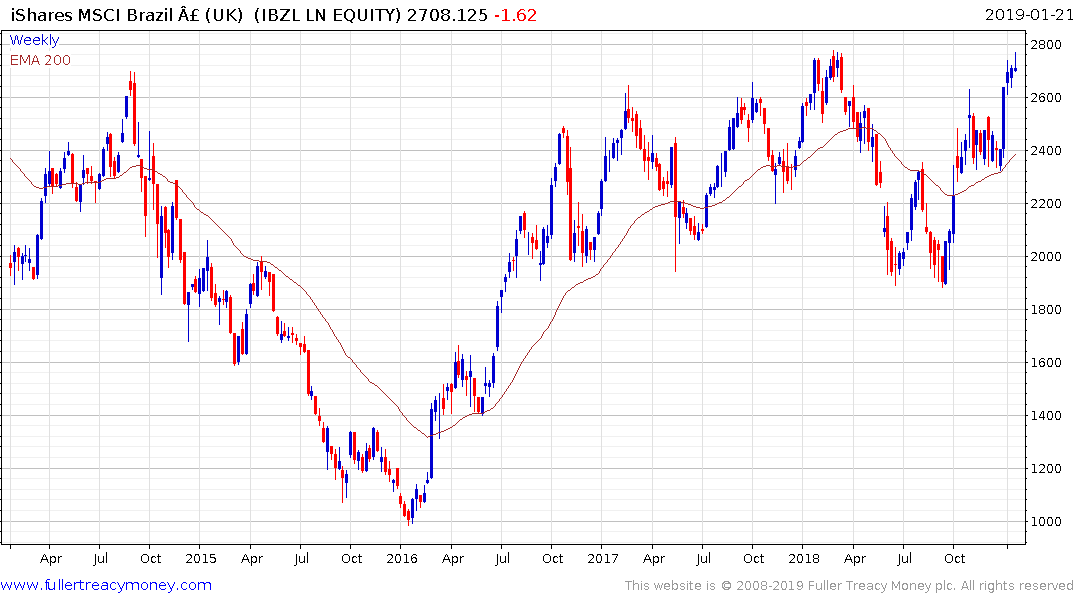 The UK listed iShares MSCI Brazil ETF is testing the upper side of the more than two-year range and while some consolidation appears likely in the short term, a sustained move below the trend mean would be required to question potential for a successful upward break.