Governor Haruhiko Kuroda said at a press briefing that the central bank didn’t need to reconsider its current policy framework.

His comments last month on the "reversal rate” theory stoked speculation about an earlier policy exit. The theory posits that monetary stimulus could end up hurting commercial banks’ profitability, making them less likely to lend.

Kuroda said Thursday that financial intermediation hasn’t been impaired in Japan and that talk about the theory doesn’t indicate any need for policy change. The yen weakened following the comments and traded at 113.57 per dollar at 5:12 p.m. in Tokyo.

"Just because I brought up this academic analysis, reversal rate, doesn’t mean at all that we need to review or change the yield curve control we’ve adopted since September last year,”

There are nascent signs that inflationary pressures are mounting internationally, whether that is because of political factors, wage demand growth, high asset prices, services inflation, insurance prices or the withdrawal of stimulus. Considering Japan is the country that has been trying to foment inflation for longer than anyone else, it represents a test case for where inflation is likely to have some of the greatest effects on asset prices. 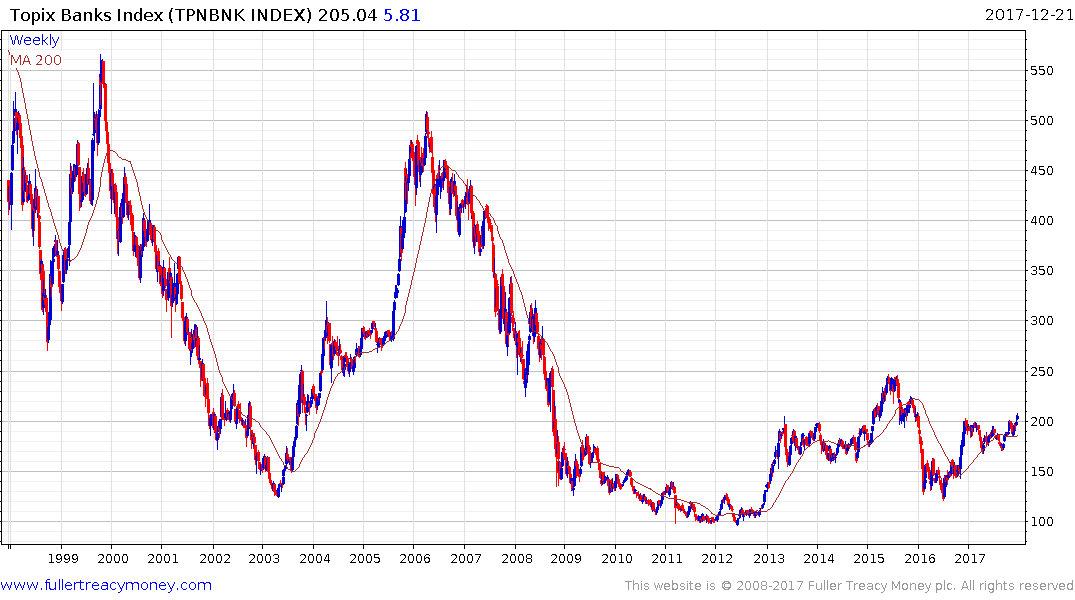 The Topix Banks Index has so far succeeded in holding the move above the psychological 200 level and a sustained move below the trend mean would be required to question medium-term scope for additional upside. From a long-term perspective the value of the Index is not far from where it was in nominal terms before the big 2003 rally so this is a sector that is worth watching. The only Japanese bank ETFs I have found are listed in Japan. Meanwhile a number have either ADRs or GDRs. Here is a list