One board member said the bank needs to make it clear that there is no change in its commitment to fulfill the objective as soon as possible, according to the summary, which don’t identify who said what. Kuroda said the BOJ will continue easing “very persistently” at a press conference following the policy decision.

BOJ’s updated price forecast for four years through fiscal 2020 was also released on April 27, showing no board members see inflation rising above 2 percent in a stable manner.

“In order to continue with powerful monetary easing, the bank needs to constantly consider enhancing its sustainability while aiming to gain consensus among the public on the necessity of the price stability target,” one board member said.

One member said an early rate hike would result in multiple adverse effects, including falling bond and stock prices, while a stronger yen would cut into corporate profitability.

Real Estate prices are the primary drag on inflation from the latest BoJ report. That is perhaps not so surprising with a shrinking population. However, the other point that needs to be borne in mind is that job openings are rising, labour force participation is high and wages just broke out. Against this background the BoJ is not going to be removing stimulus any time soon and may even increase it. 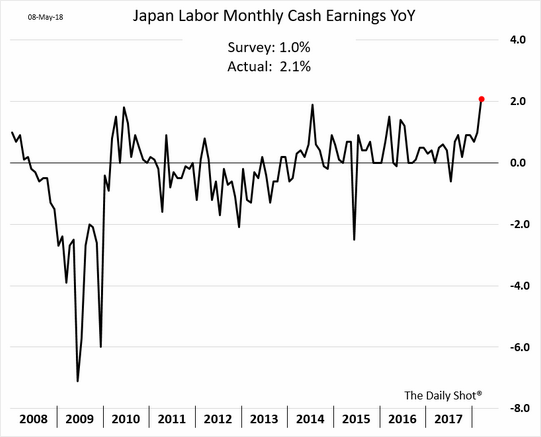 When I was in Japan both this year and last I saw plenty of evidence of foreign workers, from around Asia, despite official resistance to widespread immigration. The Topix Real Estate Index has held a progression of higher reaction lows since 2016 and a sustained move below 1400 would be required to question medium-term scope for continued higher to lateral ranging. 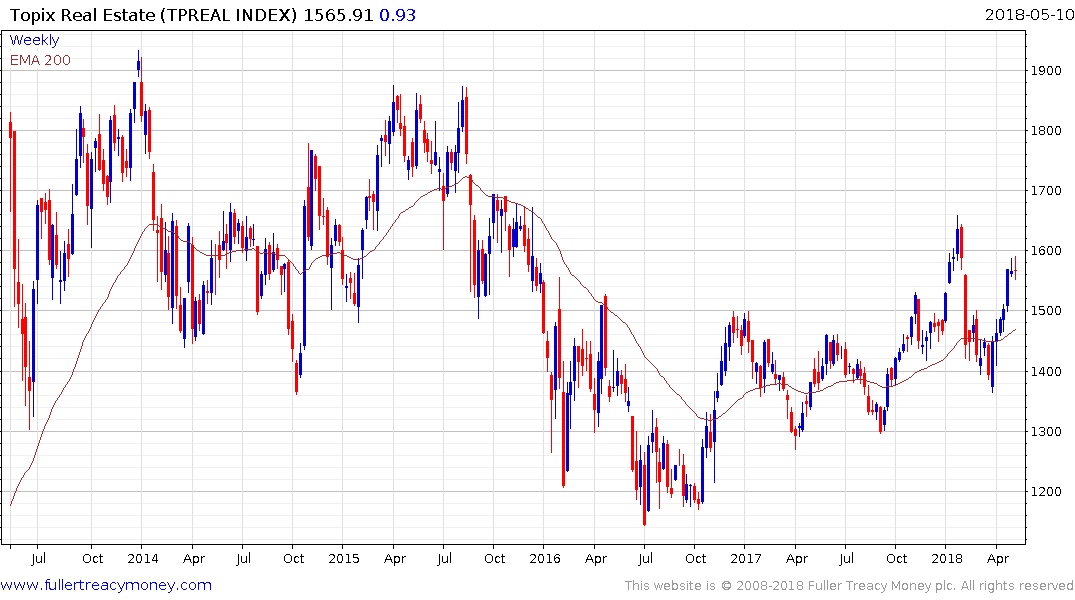 The Topix Banks Index has been ranging mostly below 2000 since 2013, apart from a brief period in 2015. A sustained move above that level would confirm a return to medium-term demand dominance. 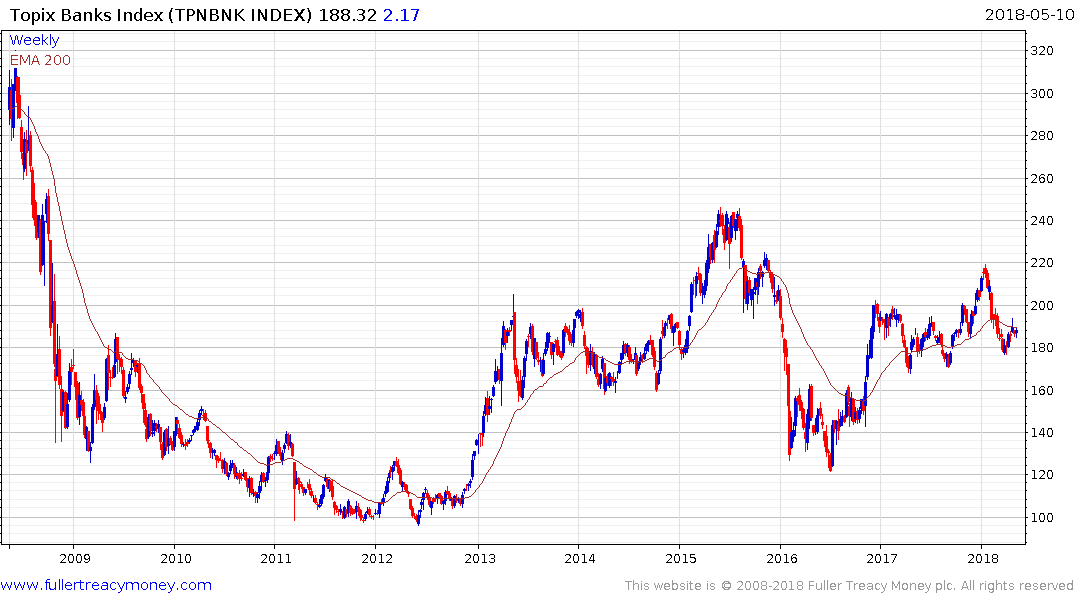 The Topix 2nd Section of mid and small caps continues to hold the 7000 area, following its pullback from the January peak. As long as it is holding the region of the trend mean we can give the benefit of the doubt to support building. 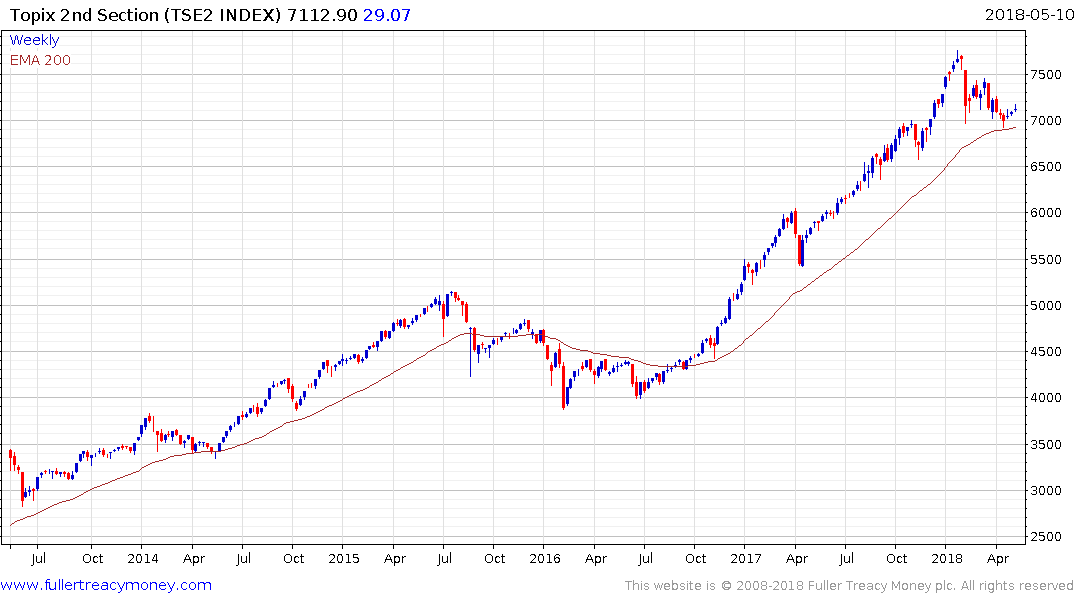 The Nikkei-225 has bounced from above the psychological 20,000 level and despite a short-term overbought condition, a sustained move below that area would be required to question medium-term scope for continued upside. 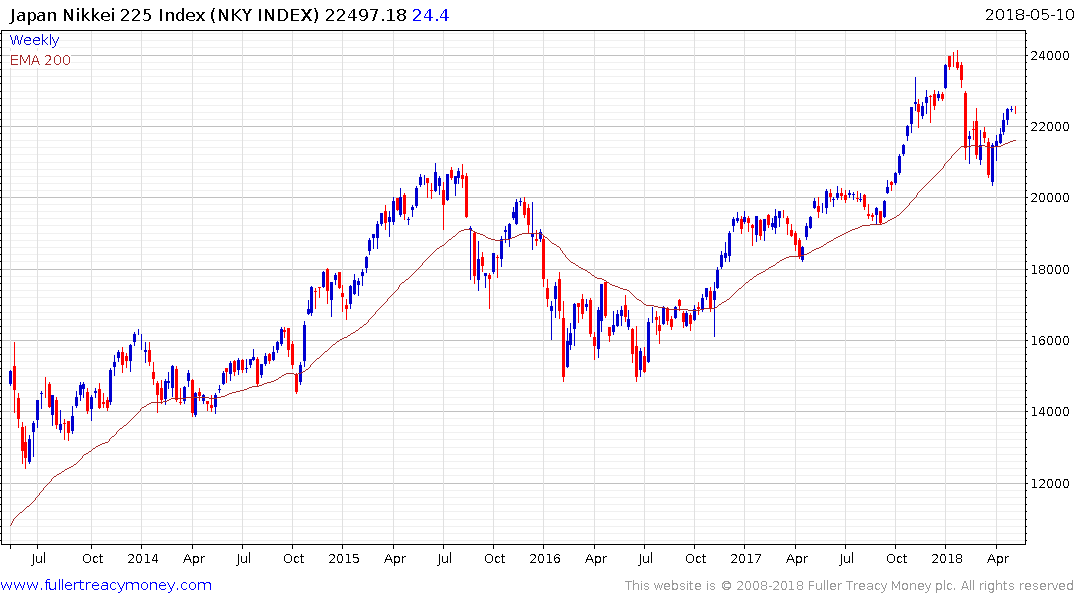