Earnings per share beat on higher fees and lower taxes, Morgan Stanley analyst Betsy Graseck wrote in a note, with the bank’s net interest margin beat showcasing that BofA’s “asset sensitivity is coming through.” Trading fees and investment banking topped her estimates as well, and she sees BofA generating “strong positive operating leverage, even in a weak revenue environment” -- which isn’t priced into its stock.

Goldman’s results weren’t all positive, though, as FICC and equities sales and trading revenue missed, its investment banking transaction backlog dropped from the end of the third quarter while questions about 1MDB will likely hang over the bank.

​JMP’s Devin Ryan said in a note that “relief” for Goldman’s shares is “warranted following disproportionate pressure over the past year.” He also sees Goldman’s slide deck presentation with more detail around the quarter as likely to be “much appreciated by investors and viewed as a sign that the firm is moving toward a greater level of transparency.” He’s listening for color on 1MDB on the call, which started at 9:30am, though he’s “not expecting much.” CEO David Solomon has so far said, “We apologize to the Malaysian people.”

The S&P500 Banks Index dropped abruptly in December and has rebounded to unwind about two thirds of the decline. It is now within striking distance of the trend mean which represents the first area of potential resistance. A higher reaction low and sustained move above the trend mean will be required to question the overall downward bias. There is no doubt the relief rally seen to date is encouraging but a great deal of technical damage has been done and even in a best-case scenario it will take time to repair. 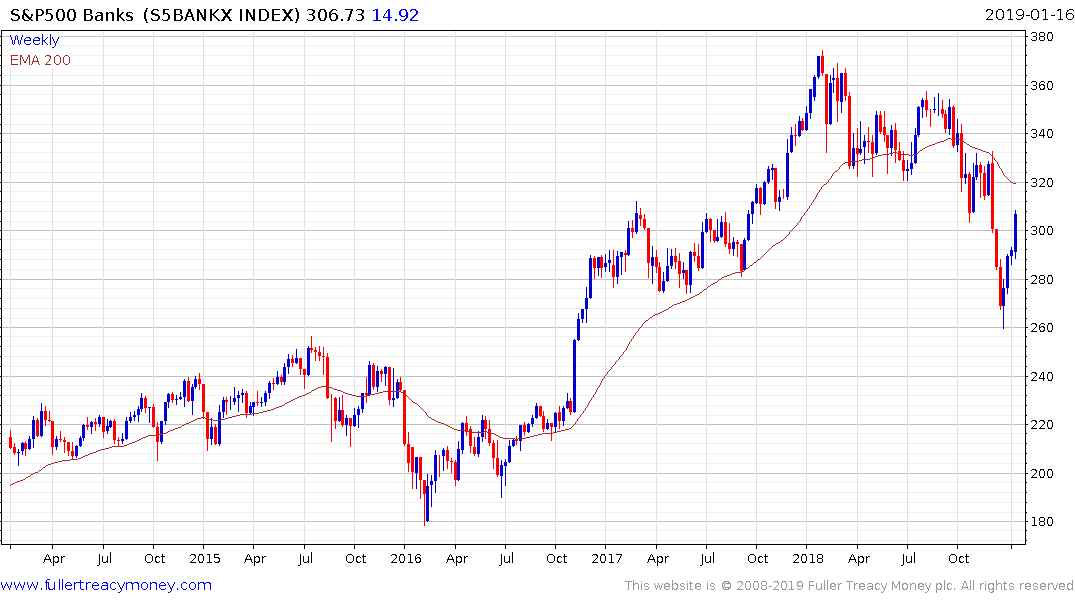 Goldman Sachs found at least near-term support in the region of $150 and is also unwinding a short-term oversold condition. 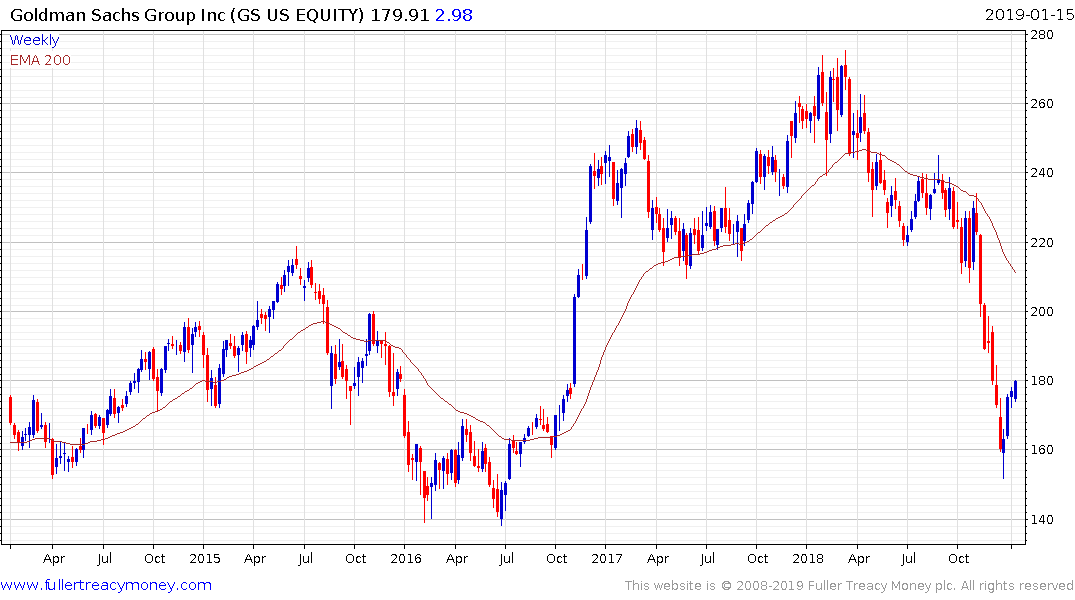 JPMorgan was the best performing major bank in the aftermath of the credit crisis and its pattern shares a high degree of commonality with the sector. 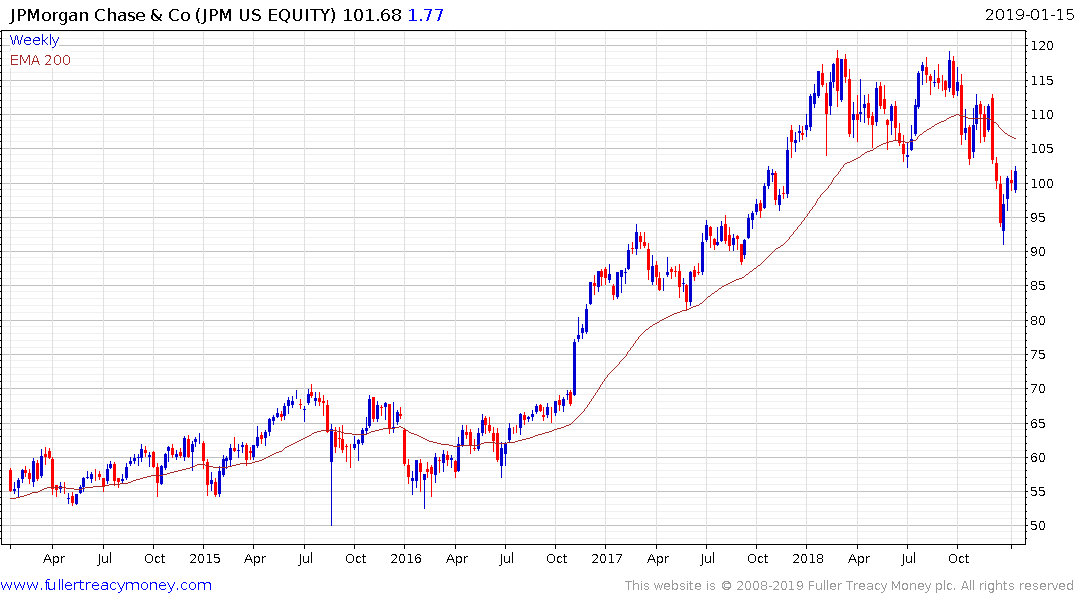 The KBW Regional Banks Index experienced its largest decline since the credit crisis between September and December. It is now also unwinding the short-term oversold condition. It was not the most consistent of trends to begin with so it would unreasonable to expect a change to a consistent environment now. However, it needs to at least put in a higher reaction low to question the downward bias. 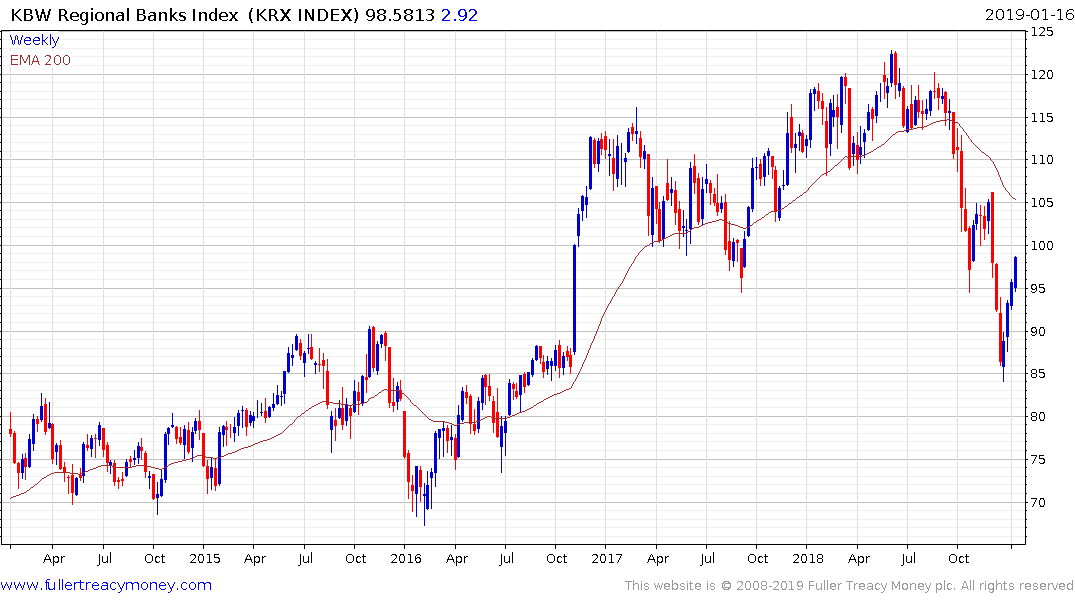