Boeing Co. is telling 737 Max customers that the grounded jet won’t be approved to fly until June or July, months later than previously anticipated, said people familiar with the matter.

The new delay comes after two recent discoveries, a software flaw that will require more work than expected and an audit that found that some wiring on the plane needs to be rerouted. The timetable also includes a buffer for unanticipated complications, said one of the people, who asked not to be named because the discussions are private.

The new expectations mean that Boeing’s best-selling jet would miss the busy summer travel season for the second straight year, adding to the compensation that the U.S. planemaker is likely to pay airlines. The Max was grounded in March 2019 after two deadly crashes that killed 346 people.

Trading was halted on Boeing’s shares ahead of the above announcement. The retort from the FAA that no timetable for the recertification of the aircraft has been set and that safety remains the top priority represents an additional blow.

The share has Type-3 top formation characteristics. These kinds of patterns are characterized by a war between supply and demand with ranging, time and size being the key characteristics. The longer the range persists for the more polarized the camps become with the bulls holding to the believe everything is going to be OK and the bears fervent in their belief the price structure is nothing but a house of cards; ready to collapse. The longer this argument persists however, the more difficult it is for the bulls to support their argument and on top of that the volatility saps investor interest.

Ranges are explosions waiting to happen so when these kinds of big patterns are completed, we can see big moves. The neckline on the Boeing chart is $300 and probably represents where a large number of stops are positioned. 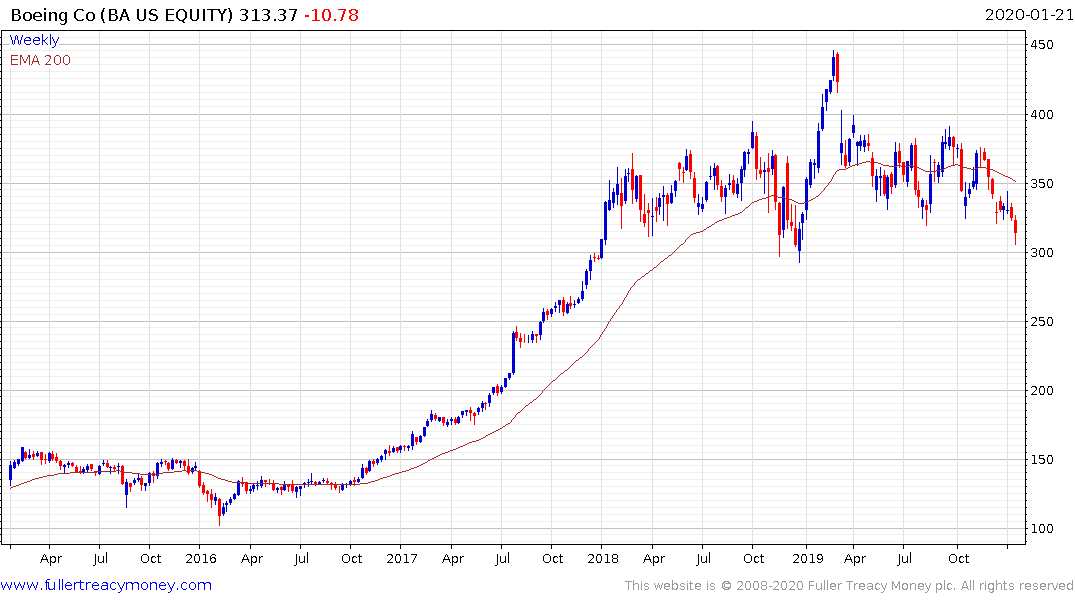 The bigger picture is Boeing’s troubles have the potential to shave 0.3% to 0.4% from US GDP in the first quarter. That’s a big number and highlights how much value the company and its suppliers represent. 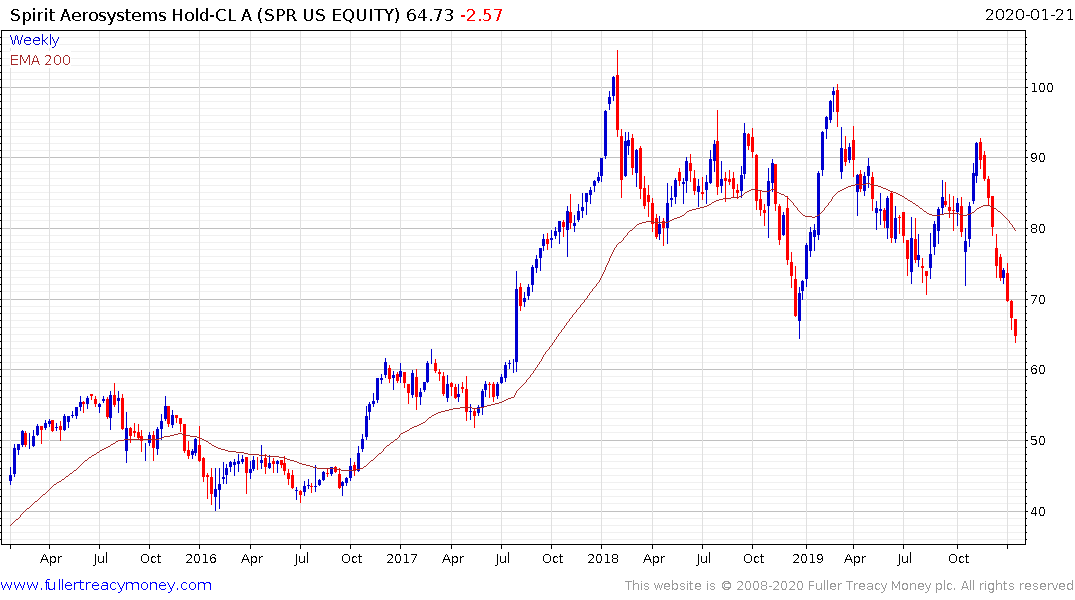 Spirit AeroSystems appears to be in the process of completing its top formation despite the short-term oversold condition. Boeing represents 80% of the company’s revenue. 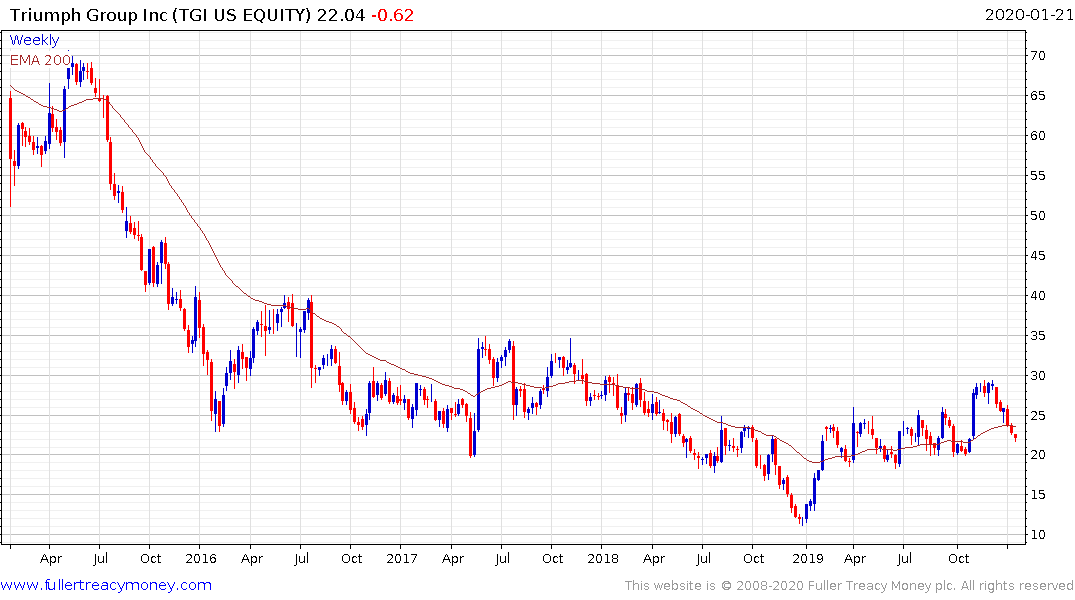 Triumph Group relies on Boeing for 34% of revenue. The share failed to sustain the breakout in December and is rapidly falling back to test the lower side of the range near $20, where it will need to demonstrate support if the recovery argument is to remain credible. 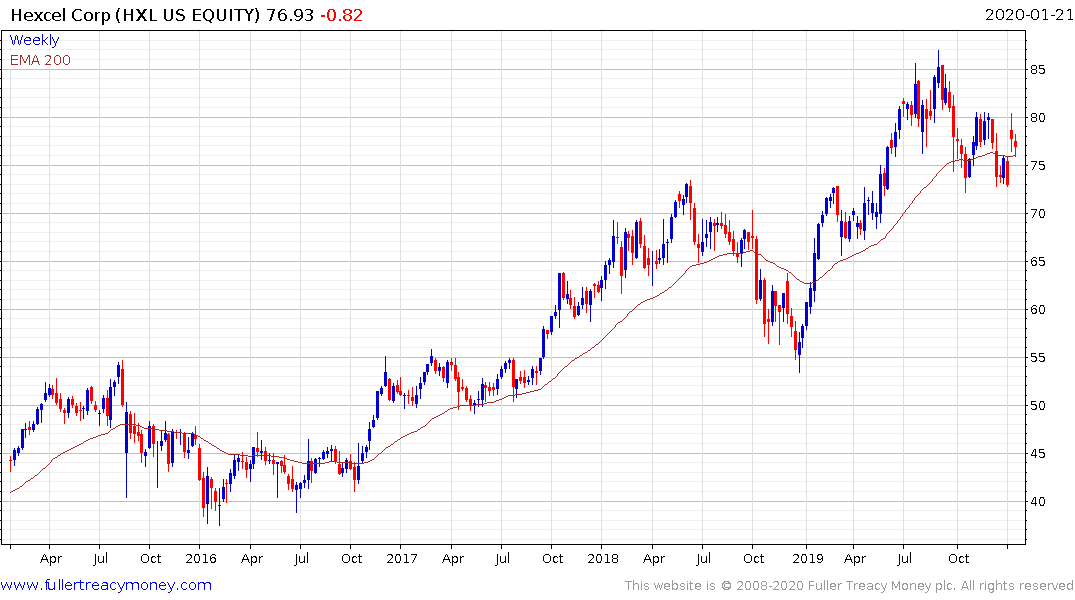 Hexcel Corp derives 25% of revenue from Boeing. The share has been trending reasonably consistently over the last decade but is currently exhibiting resistance in the region of the trend mean.

The US economy’s outperformance has been driven by the health of the consumer. The risk right now is lay-offs increase within the aerospace sector, where workers tend to be well compensated and that rolls into consumer demand.