Bank of England policy makers and investors are taking contrasting views of the U.K. economy as official warnings of potential interest rate hikes clash with market predictions for a cut.

The market moves are partly based on a belief that the U.S. Federal Reserve is on course to reverse its recent hiking path, forcing central banks around the world to follow suit, but also reflect the drastically different Brexit outcome built into investors’ outlook.

While the BOE’s forecasts -- including its hawkish view of longer-term inflation -- are based on the assumption of a smooth Brexit process, investors have the luxury of being more nimble, and so have increasingly priced in the risk of a no-deal departure in October. That’s not without reason, since no deal is a policy advanced by a number of potential candidates to replace Theresa May as prime minister this summer. There are also nascent signs that BOE officials are ending their year of unanimity, with some edging closer to the market’s view.

The UK is just about the only developed market where inflation measures are above the comfort level of the central bank and yet the Bank of England is not in a position to raise rates. CPI has been above 2% since early 2017 and while the rate moderated from 3% to 2% last year it has stabilised this year. Brexit represents a key uncertainty because a hard exit would deliver a short sharp shock which would justify the low interest rate environment, whereas if the UK ultimately decides to remain in the EU, the Pound is undervalued and the Bank of England be more inclined to raise rates.

The Conservative Party succession competition being dominated by bombastic claims of what the candidates would have done better but the EU has been steadfast in their claim they are done with negotiating. Here are quotes from the Irish Prime Minister, Leo Varadkar, and European Commission President Jean-Claude Juncker:

Irish Prime Minister Leo Varadkar warned U.K. lawmakers not to assume that because they have blocked Theresa May’s Brexit deal, Britain will automatically win a better accord. “That is a terrible political miscalculation, and I hope that’s not the one that is being made across the water,” Varadkar said in parliament in Dublin. “That really misunderstands how the EU works.”

Juncker Says Brexit Deal Can’t Be Reopened (4:55 p.m.)
European Commission President Jean-Claude Juncker said the next U.K. leader should drop any idea of reopening the Brexit deal the European Union struck with Theresa May’s government. “It has to be respected by whomsoever will be the next British prime minister,” Juncker told a Politico event in Brussels.

Theresa May is correct that the next UK Prime Minister is going to face exactly the same problems she has, the difference is with a new Prime Minister, the polarity of the outcomes can be brought into focus which will bring a hard break or new referendum into focus. 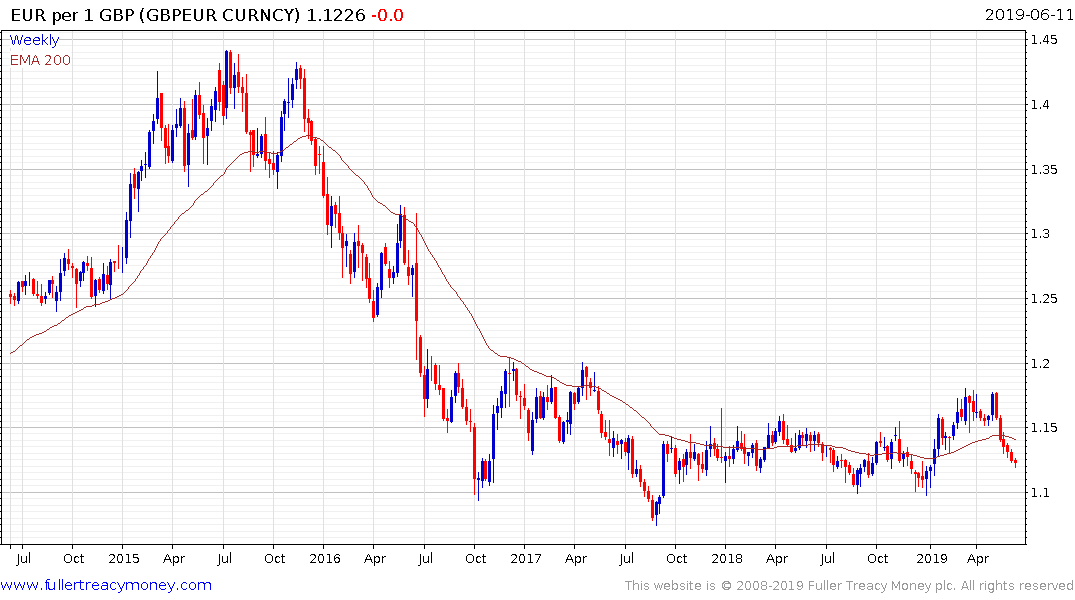 The Pound continues to trend lower against the Euro, having failed to sustain the break above €1.15. A break in the consistent progression of lower rally highs will be required to question signal a return to demand dominance.