Chancellor of the Exchequer Rishi Sunak announced 30 billion pounds ($34 billion) of fiscal stimulus and pledged to spend 600 billion pounds by 2025 on a massive infrastructure program, alongside measures to help businesses and the National Health Service weather the disruption from the disease.

The European Central Bank is expected to join the easing this week after President Christine Lagarde warned leaders on Tuesday that the crisis has echoes of 2008.

“The bazookas are loaded and the BOE just fired their first salvo,” said Luke Hickmore, investment director at Aberdeen Standard Investments. “It seems unfeasible that the ECB does not also find ways of supporting the banking system. Europe needs to get its act together -- and act together.”

The predictable 50 basis cut to the Bank of England’s interest rates is the first volley in a range of supports. The announcement of massive infrastructure spending, fiscal deficits but less bond issuance than originally anticipated is all designed at making the best of a bad situation. That final point where less bonds were issued than expected was probably aimed at countering the claim Modern Monetary Theory is being deployed.

Nobody is going to argue with the need for infrastructure development to both replace and replenish the UK’s physical assets. The thorny issue of energy independence and the desire to ensure the economy is capable of competing effectively with the EU are likely to be among the most pressing medium-term issues as the near-term threat of the virus overwhelming the NHS is dealt with. 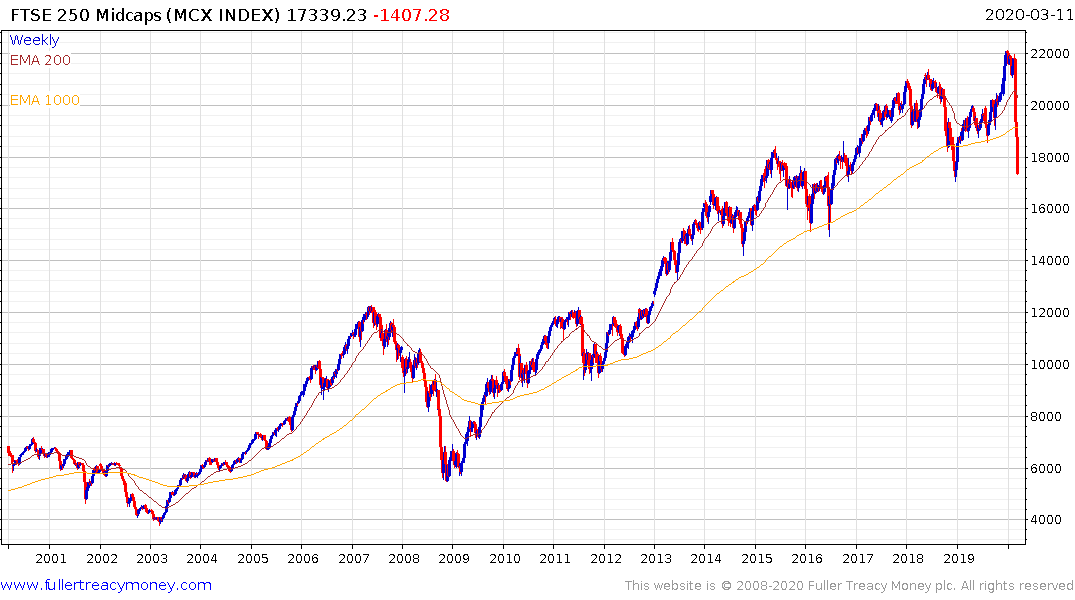 The stock market is not yet ready to give credence to the stimulus being announced because the news about the virus continues to get worse. The FTSE-250 moved to a new reaction low today while the size and speed of the move clearly fulfil the requirements for a Type-2 top.

The challenge for investors is while many are willing to concede that growth is going to take a significant hit in the 1st quarter and will likely be negative in the 2nd quarter, no one knows how long it will take for consumer confidence to return if the virus spreads to the entire population. That’s the primary risk deterring investors from bargain hunting right now. The longer the negative slow down in consumption persists, the greater the damage corporate balance sheets will take. It’s that realisation that drove the Chinese propaganda machine into overdrive to downplay the risks.