Blitzscale and Hope: Unicorns, IPOs and the Fear of Repeating the Late 1990s
Comment of the Day

Blitzscale and Hope: Unicorns, IPOs and the Fear of Repeating the Late 1990s by Eoin Treacy

To illustrate why this is a problem, earlier this month 32% of Facebook’s external shareholders voted against the reelection of Mark Zuckerberg to the board, with 67% backing a proposal for the introduction of an independent board chair. However, neither of these moves stood a chance as Zuckerberg holds 58% of the voting power, even though he only owns 13% of the total company shares. Unchallengeable control by one person over such a large and complex firm is troubling, especially considering the multiple controversies the company is currently grappling with. Facebook has become the poster child for governance challenges, with an increasing number of regulators and institutional investors calling for sunset provisions or even outright bans on dual-class structures. The complexity of voting rights can also make the valuation of VC-backed companies extremely confusing.3 After multiple funding rounds, many unicorns end up with convoluted financial structures, which can be confusing and misleading, even for sophisticated insiders. Such complexity is a common feature of asset bubbles (this was particularly the case during the housing market excesses a decade ago), which raises the question of whether the surge in unicorns and IPOs is just the tip of a much larger iceberg.

I share some sympathy with the view that there are some private companies that have the majority of their growth in their future and not in the past. There is a rational argument that most successful companies in the stock market today was a private company once upon a time so there are obviously going to be some successes.

However, what I find particularly interesting is the agonising over the lack of covenants in the debt markets and the surge in leveraged loans, yet there is has been precious little commentary on the growth in dual class shares and the diminution of minority shareholder interests. 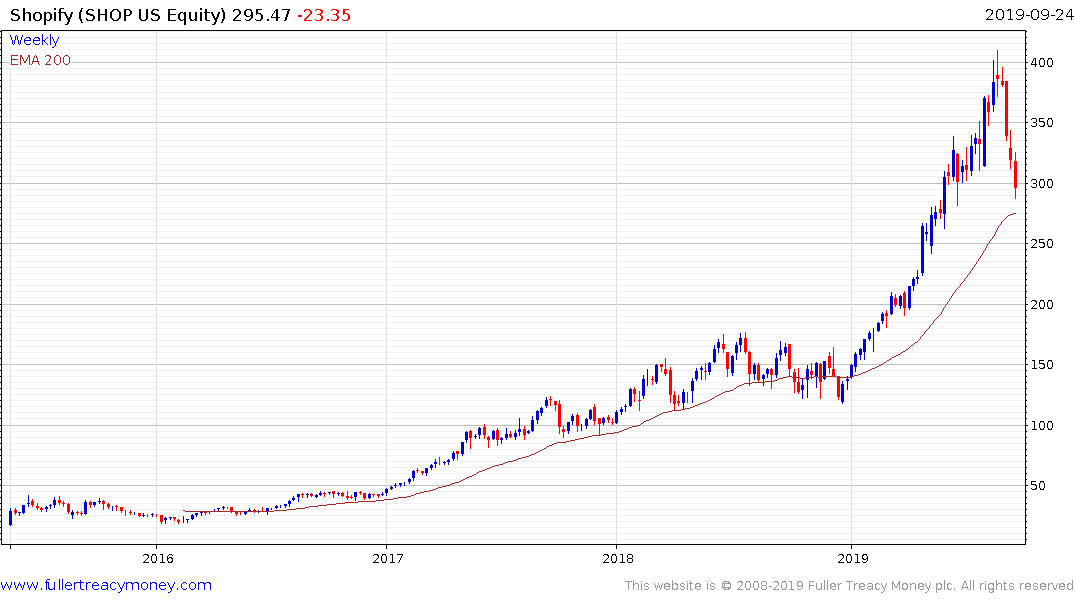 Shopify has been one of the best performing new companies over the last few years but had an estimated P/E of 597 three weeks ago. Today it is 482 and there is a clear risk of additional valuation compression and that is for a company that is among the most competitive in its sector. The share steadied today from the region of the trend mean but it is very likely that the period of high growth is over.

Every share available to borrow to short Beyond Meat is already lent out. The share is priced for perfection but competition is rising and the valuation is also contracting.

The nature of markets is that the during a correction everything falls and the better companies bottom first. It is too early to separate the wheat from the chaff but there will be wonderful opportunity among the newly listed companies when valuations are more reasonable.