It’s closer than you think. BlackRock Inc. and Vanguard Group — already the world’s largest money managers — are less than a decade from managing a total of $20 trillion, according to Bloomberg News calculations. Amassing that sum will likely upend the asset management industry, intensify their ownership of the largest U.S. companies and test the twin pillars of market efficiency and corporate governance.

None other than Vanguard founder Jack Bogle, widely regarded as the father of the index fund, is raising the prospect that too much money is in too few hands, with BlackRock, Vanguard and State Street Corp. together owning significant stakes in the biggest U.S. companies.

"That’s about 20 percent owned by this oligopoly of three," Bogle said at a Nov. 28 appearance at the Council on Foreign Relations in New York. "It is too bad that there aren’t more people in the index-fund business.”

ETFs are cost effective and offer access to market performance, with a mild underperformance, for an increasingly wide number of countries, sectors, currencies, commodities, bonds and real estate.

For ETF providers the most expensive fund to launch is the first one. Every one after that is simply an iteration of the first based on a different basket. Therefore, they have an incentive to create as many as possible in the hope that a few will capture the imaginations of investors and be wildly successful at accruing assets.

Vanguard and Blackrock have successfully marketed their offerings better than anyone else and their funds now account for significant proportions of average daily volume. Today they have combined assets of almost $11 trillion.

By simply buying the Index one is putting one’s faith in the dominance of large caps. As long as the major constituents of an Index are performing favourably, they will tend to drag the Index higher. Meanwhile the greatest negative effect of a declining share is when it starts to fall because the lower it goes the more its weighting in the Index declines.

This growth is representative of the trend towards earnings agnostic investing. ETF investors might think they are simply buying the Index but that decision is inherently momentum investing because it relies on winners continuing to outperform. Quantitative and risk parity strategies might have different rationales but they are also earnings agnostic.

Active managers have been decimated in the bull run of the last few years with low volatility and consistent trends meaning that hedges are loss making. That has also incentivised investors to pursue passive strategies.

What this theme is pointing towards is a lack of fundamental research influencing market behavior amid a triumph for momentum. It is symptomatic of the beginning of the third psychological perception stage of a bull market which is often, though not always, associated with acceleration. This therefore a time to remain invested but to be increasingly attentive to the consistency of trends. 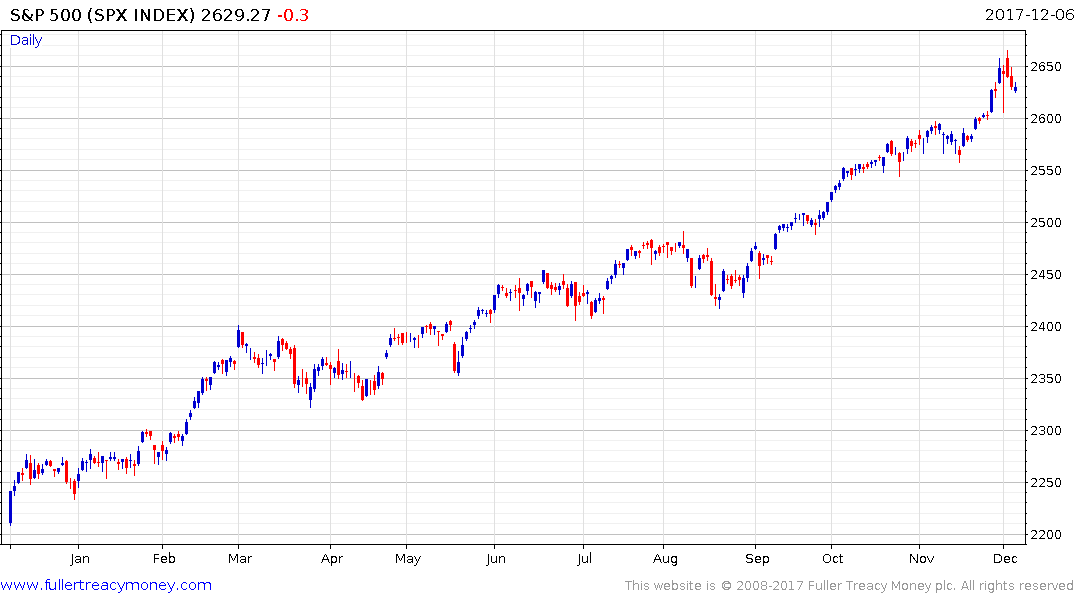 For example, the S&P500 has not pulled back by more than 80 points in a year. A reaction of greater than that will be required to even begin to question the consistency of the medium-term advance.