“Typically we look at that as more of a strong-handed rally, which implies that the leverage portion of the rally comes later,” Ouellette, FRNT’s co-founder and chief executive officer, said on Bloomberg’s “QuickTake Stock” streaming program. “If that is the case, those $100,000 targets are very reasonable, I’d suggest. The last time we saw a move of this little leverage, we were pointing towards $20,000, and we didn’t really see the leverage come into the market in an aggressive way until we got to $40,000, which took us to $65,000.”

This is how all bull markets evolve. When prices are just breaking out there is no evidence that the price is about to multiply so few people are invested. As evidence becomes apparent more people are willing to commit funds. By the time prices accelerate people are jockeying to buy as much as they can because there is already so much evidence to support the bull market hypothesis. That final stage is usually when the most leverage is present.

There is an incessant argument about what bitcoin is and how much value it has for society. All of that is largely irrelevant to the price. Bitcoin trades like a barometer for the perception of how much liquidity will flow into the market. The crypto sector attracted about 10% of in the increase in the size of the major central banks’ balance sheets last year.

The fear that the fountain of new money would be dialled back, was contributing factor in the decline from the March peak. Speculation that the money will keep flowing over the next 12 months is helping to reignite interest in liquidity plays. The USA’s $1 trillion infrastructure bill, $3.5 trillion budget proposal and the Eurozone’s €750 billion economic recovery package all point towards additional efforts to dilute the value of fiat currencies. 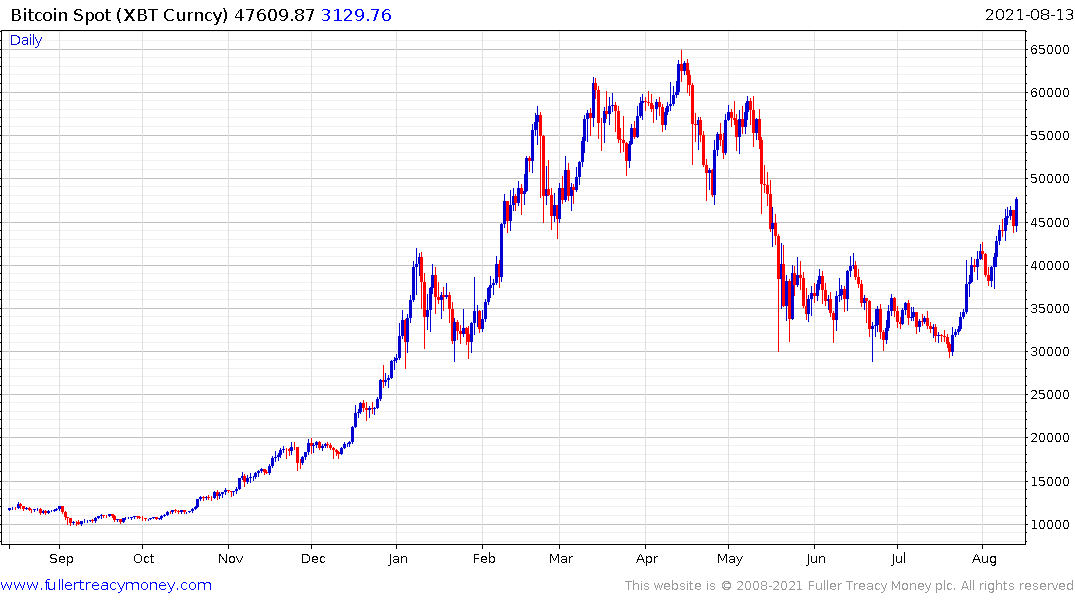 Bitcoin’s rebound is reflecting that. 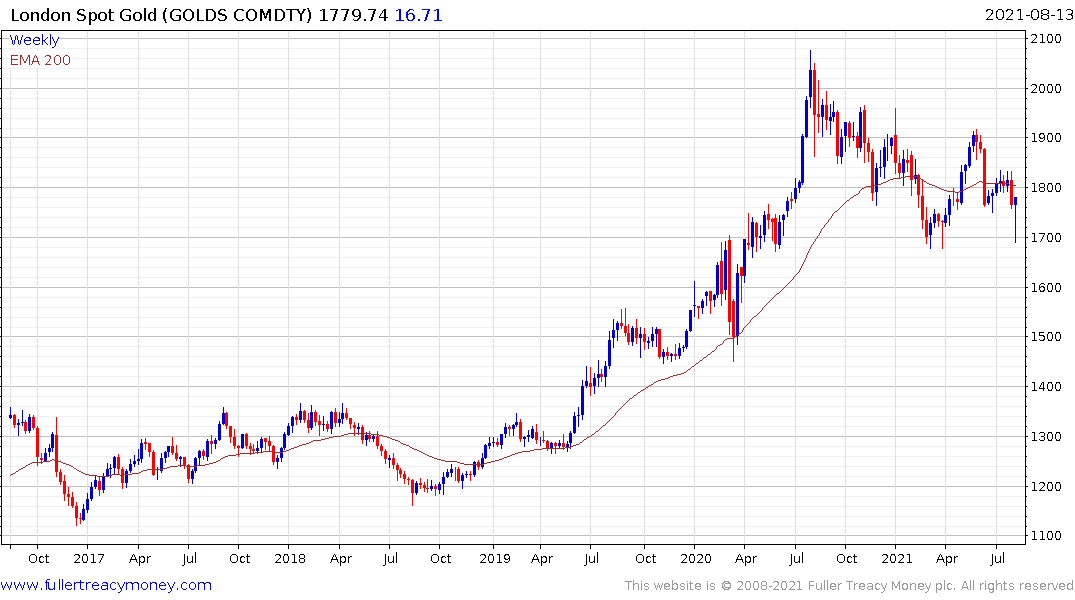 So is gold’s. The hit India and China took from the delta variant removed some demand from the market. When that recovers it will likely act as a significant tailwind for gold prices. Meanwhile we are almost 50 years on from Richard Nixon’s decision to allow the Dollar to float versus gold. Since then the Dollar has lost 85% of its value. 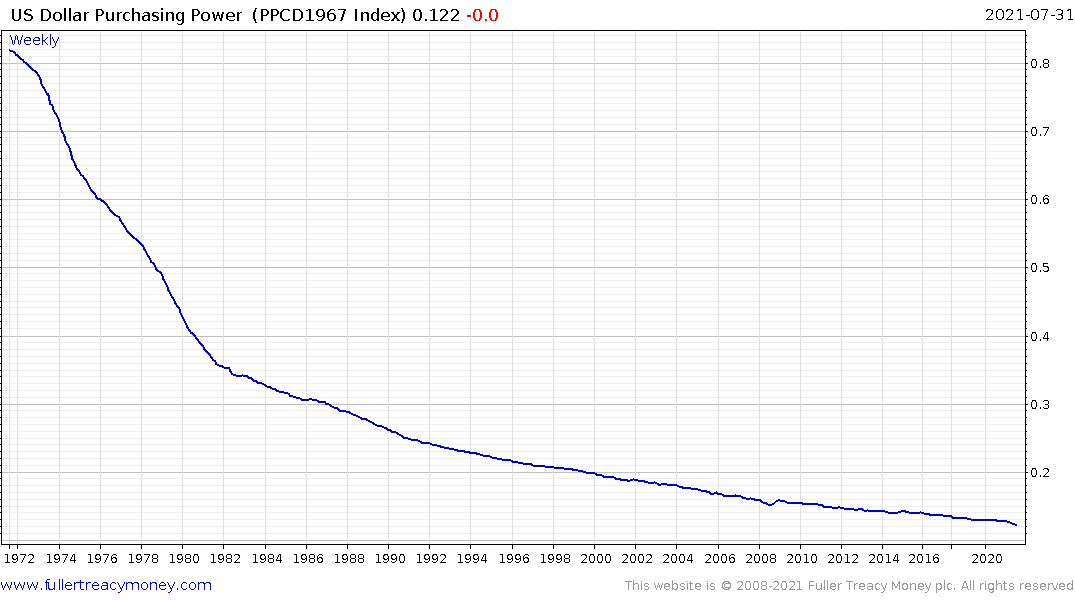 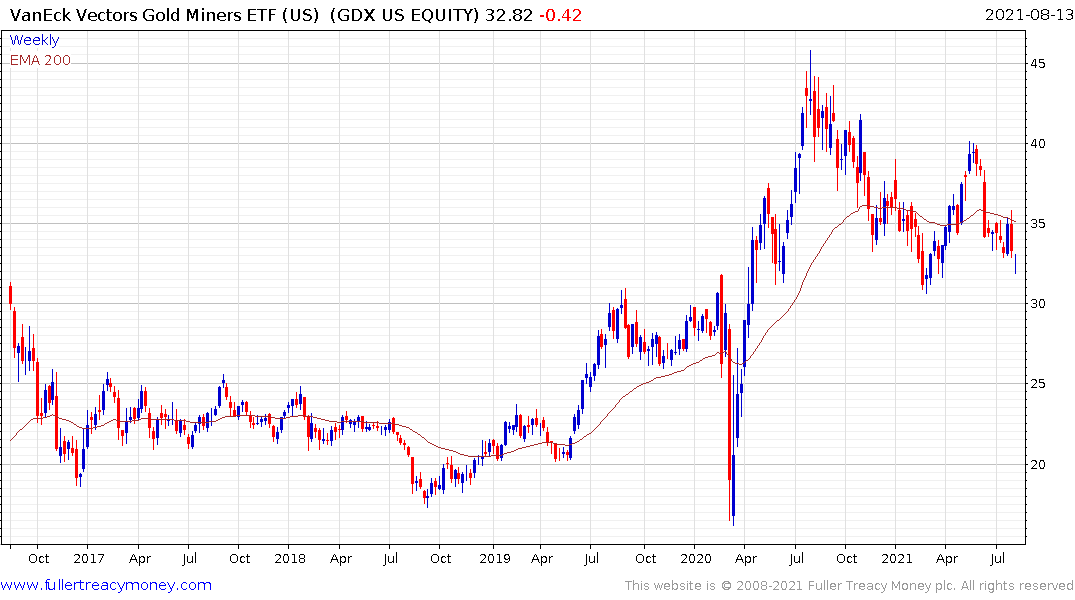 The Van Eck Vectors gold miners ETF (GDX) is beginning to steady from the region of the upper side of the base formation.