“The transparency in Bitcoin is helping drive a lot of interest,” said Lyle Pratt, an independent investor who owns Bitcoin. “Gold is kind of like a blackbox, you have to trust the custodians to tell you about any flows in the market.”

For Plurimi Wealth LLP’s Chief Investment Officer Patrick Armstrong, who allocates 6.5% of his discretionary funds into gold, even if Bitcoin has potentially bigger upside in an inflationary spiral, the risks are just too big. Gold also has a long history as a store of value that Bitcoin can’t match. There’s always the nagging suspicion that another, potentially central-bank backed, digital currency could supplant it.

“If the debasement trade works, it is very possible Bitcoin works better,” he said. “But it is also possible Bitcoin has no value in years to come, while I do not think the same can be said of gold.”

One thing that’s clear is Wall Street is taking Bitcoin seriously in a way that it didn’t in 2017. “I have changed my mind!” wrote Sanford C. Bernstein strategist Inigo Fraser-Jenkins in a report Monday. Bitcoin won’t replace gold, but there’s room for both, he said, especially if the future is one of inflation and extreme debt levels.

“I see it as being complementary,” he said in an interview. “Whatever one’s starting position was before the pandemic in terms of what your gold and crypto allocation should be, I think it should be materially larger now.”

Many institutional investors missed out on the initial run-up in bitcoin prices and they are committed not to miss out on this one. The big inhibition for institutional money has been the question of custody. With so many examples of exchanges being robbed and even of an exchange CEO dying with the encryption key only committed to memory, there are obvious questions about the security of custody services. That issue was addressed when Fidelity began to offer custody services. Now that both Square and PayPal are offering transaction services, the perception of risk has been reduced but not eliminated.

The one thing you can be reasonably assured of with gold is that it is hard to move lots of it. Bitcoin can traverse the world in seconds and there is no limit on size. That means that the risk of all of one’s holding suddenly evaporating is less than with crypto.

At a board meeting for Nevada Trust Company last year we discussed what would be required to offer custody services for cryptocurrencies in the same way that we do for other assets. Even cursory research led us to the conclusion it was way beyond the ability of a medium-sized company to achieve. The risk of theft rises exponentially the more assets are held in custody. 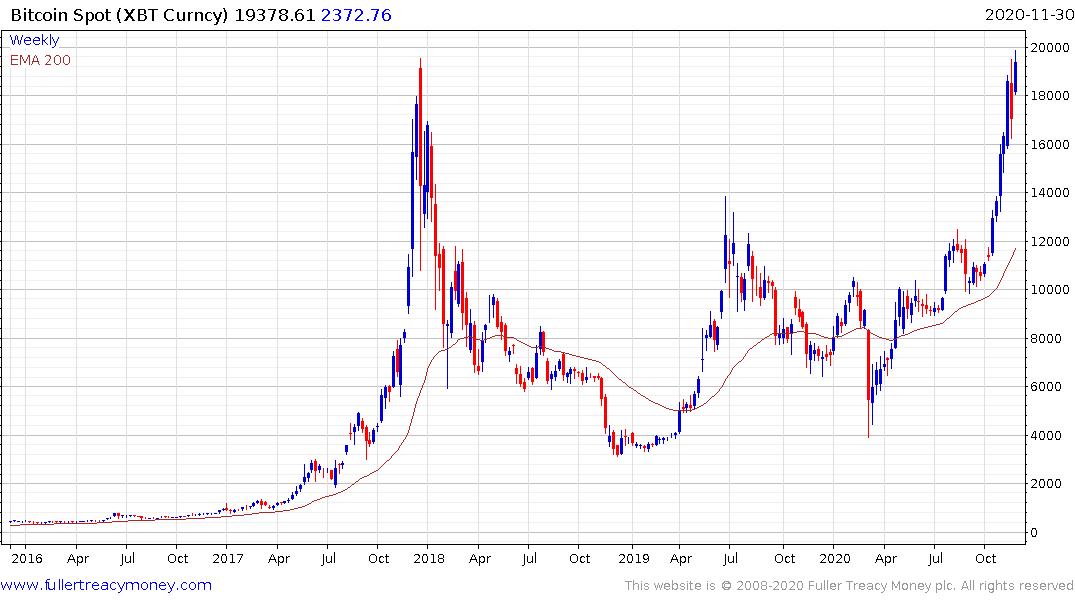 Bitcoin is a limited supply asset and the halvening earlier this year burnished that allure. That’s the primary reason it is rallying. The history of spectacular gains is attracting a whole new demographic which is necessary for any bull market. Whether it ultimately becomes a long-term store of value is beside the point. 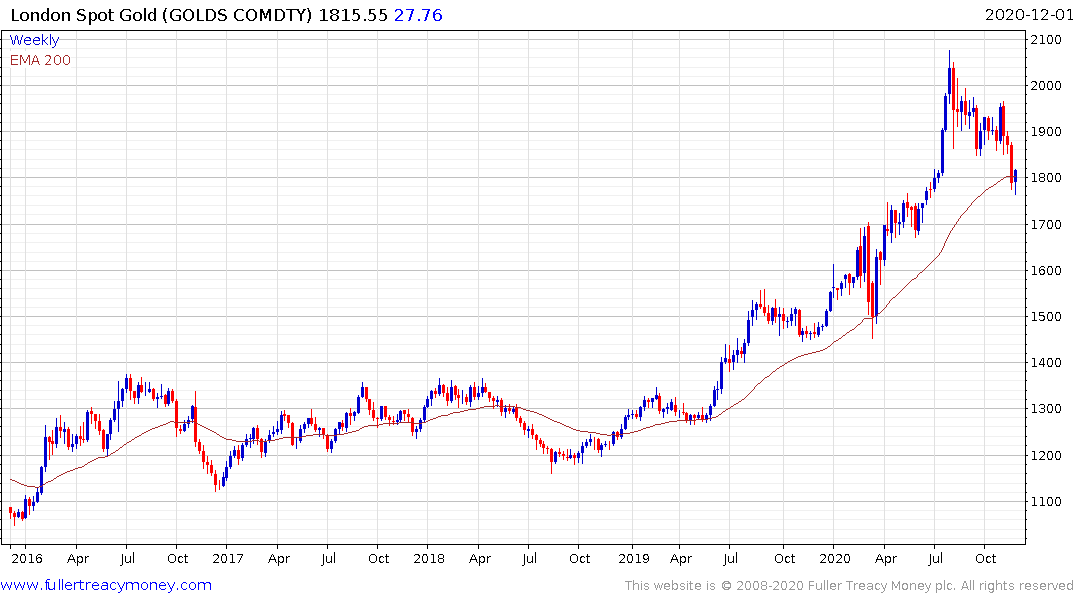 Meanwhile gold rebounded today from the region of the trend mean. It’s been in a corrective phase for much of the last three months and the downward pressure on the Dollar is burnishing its credentials as a limited supply asset.