Felix Dian, founder of crypto investment fund MVPQ Capital
“Looking at the previous bull cycle (2016/17), there have been quite a few occurrences when Bitcoin loses momentum and dips below the 100-day moving average. This one was overdue.

“We are actually seeing record subscriptions into our fund this month, from institutional family offices, with many willing to use this as an opportunity to add. Ultimately, strong hands buying will meet the lack of available liquid supply of Bitcoin, triggering a squeeze and further down the road a new retail FOMO wave.”

Jeffrey Halley, senior market analyst for Asia Pacific at OANDA
“The threat of regulation, either directly in developed markets or indirectly via the taxman, has always been crypto’s Achilles’s heel.

“Hopefully, we will hear as many ‘experts’ saying this is a sign of Bitcoin becoming a ‘maturing mainstream asset’ if it falls 10% this weekend, as we do when it rises, or a crypto-exchange chooses to IPO. In the meantime, don’t hate me for being bearish Bitcoin in the near term.”

Nikolaos Panitgirtzoglou, strategist at JPMorgan Chase & Co
“Institutional demand has indeed slowed. I’m not sure what could trigger a re-acceleration of institutional demand. You either need a big announcement like Tesla or simply a correction and clearing of retail froth to incentivise institutional investors to re-enter the market.”

With a market cap of more than $1 trillion a lot more active participation is required to fuel the rapid price advances crypto investors are accustomed to. The institutional adoption argument helped bitcoin rally from $4000 to $65000 in less than a year. The big question is where will the next trillion of liquidity come from to spur another doubling?

The total assets of central banks increased by $10 trillion in 2020 so bitcoin’s advance mirrored that explosion of money supply. With more competition for returns and lower volatility available in other assets the relative attraction on the value-at-risk basis is less impressive as stimulus decelerates.

The big potential announcement that would feed a significant recovery would be the announcement of an ETF because that would greatly facilitate trade. I view that as a less than 50% likelihood however. The continued lack of regulation for the sector should be cause for concern for any regulatory with control over retail investments. 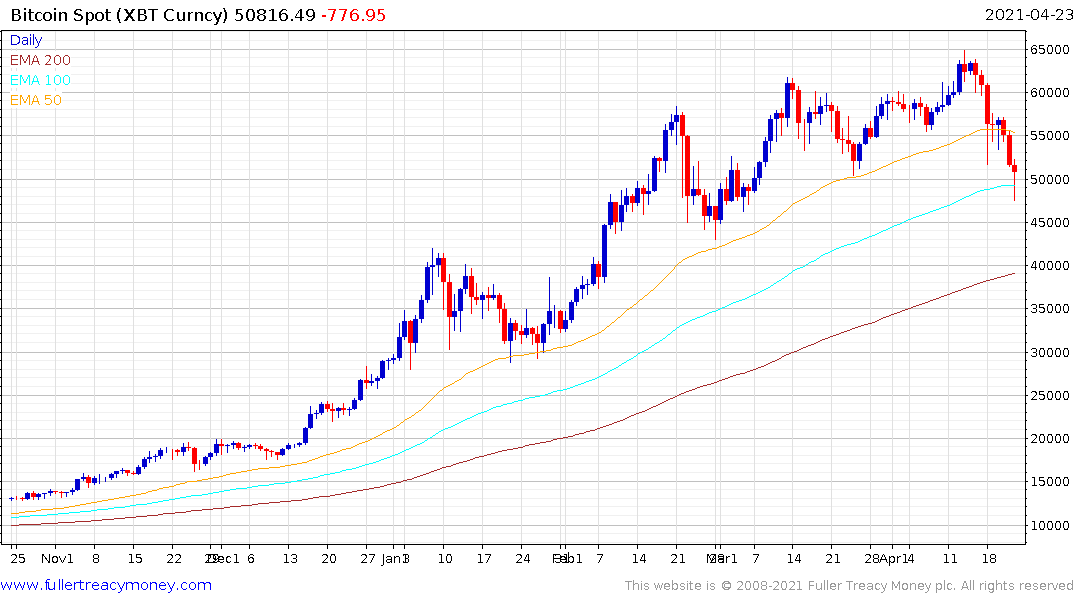 The price found support in the region of the 50-day MA on successive occasions until this week. It then dropped today to test the region of the 100-day MA. It is quite normal to see a range form below a type-2 top because the shock of the decline tends to encourage dip buying by those who feel like they missed out on the initial advance. At the same anyone who bought over the last three months is sitting on losses and feels chastened. They will seek to sell rallies. That suggests a range mostly below the 50-day is possible.

If an additional positive catalyst fails to appear soon hot money will quickly exit the market. 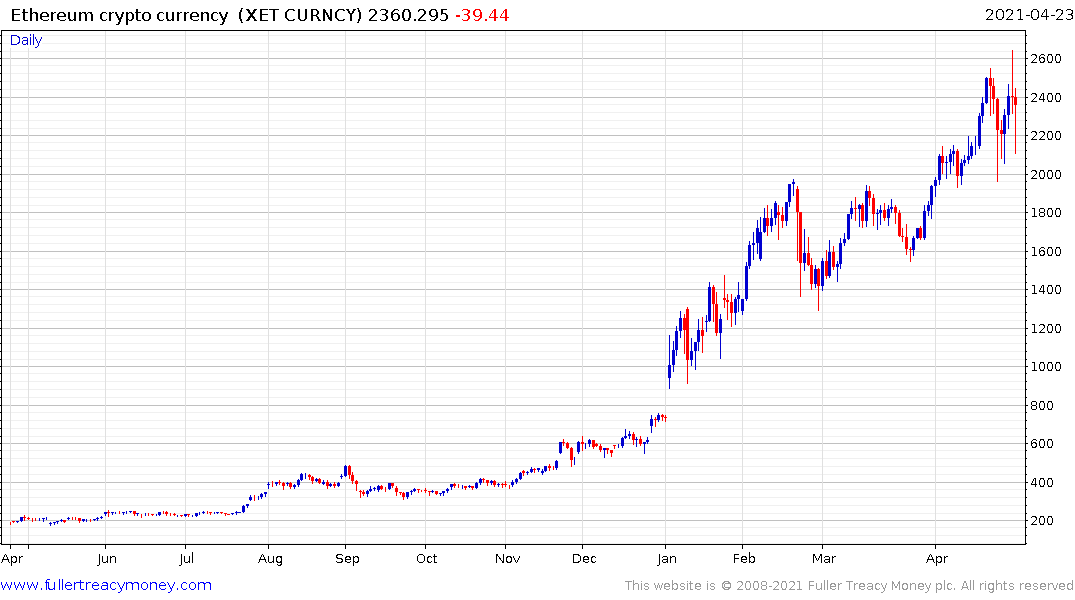 Ethereum tends to peak after bitcoin. The price rallied impressively off the intraday low today as it continues to range below the psychological $2500 level.