Bitcoin Pre-Halvening Dump Could Spell Disaster
Comment of the Day

The halving occurs every 210,000 blocks and reduces the block mining reward by half—now 12.5 Bitcoin per block. Each of the adjustments is designed to continually manage inflation on the network.

The consequence of each halvening is a massive profit slash among miners, with just half the current block reward as revenue. This leads to a massive reduction in miners, with the weak hands being forced out.

However, as miners are no longer able to continue, the total hashrate on the network drops dramatically. This leads to a subsequent reduction in difficulty for each block mined, reducing costs for miners who make it through. In the end, the genius of Nakamoto shines.

The halvening has historically been a time which attracts bulls to bitcoin because it results in the halving of the reward for minting new blocks. That highlights the limited supply argument and automatically makes the bitcoin already in existence more valuable. At least that is how the logic has played out over the last few occasions. It is also worth remembering that cryptocurrencies are a little more than a decade old so drawing long-term conclusions is still something of a spotty endeavour.

The primary point about juvenile markets is they are prone to manipulation. The reliance of the market on miners is one of its primary weaknesses because they have the ability to act in the manner of a cartel. The speculation at present about the role of miners in curtailing activity to drive down prices in a winner takes all competitive purge is something to pay attention to.

In any downtrend eventually the pace of the decline picks up, in the absence of a bullish catalyst, because holders lose patience. The minimum requirement to challenge the decline will be a sustained move above $9000. 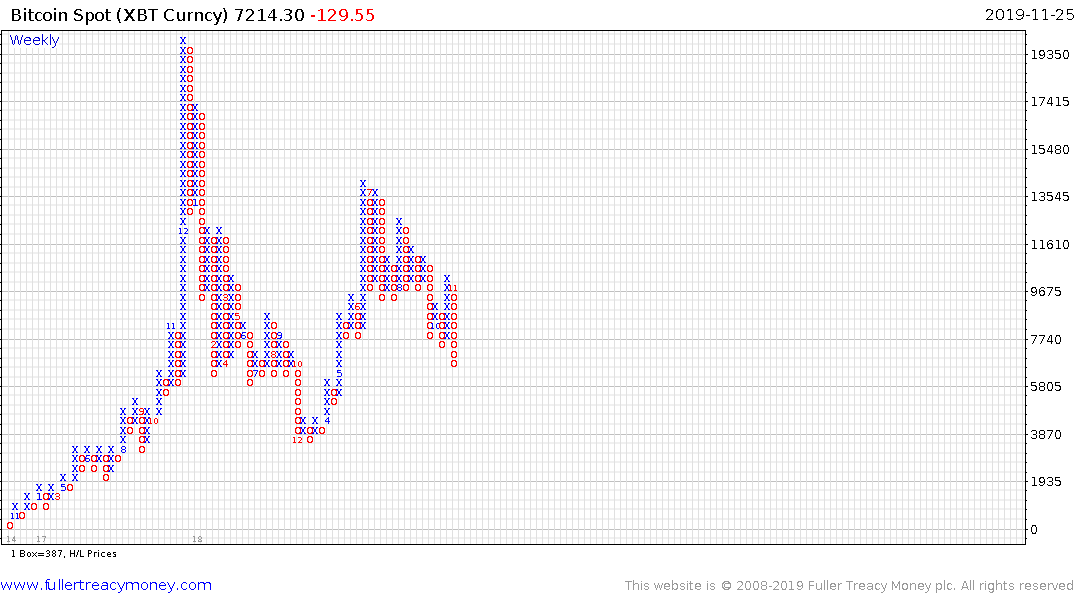 The point and figure chart does a nice job of displaying the downtrend since June.