Bitcoin is now down more than 50% from its record of almost $65,000 set in April. Fueling the volatility is Tesla CEO Elon Musk, whose social-media utterances have whipsawed the crypto community. A statement from the People’s Bank of China on Tuesday reiterating that digital tokens can’t be used as a form of payment added to the selloff.

The selloff dominated market chatter on a day when equities also were tumbling and the Federal Reserve was set to release minutes from its latest meeting. #Cryptotrading was trending on Twitter, where critics and fans alike were in a tither over the rout. Critics had warned for weeks that the moves in crypto assets were unsustainable and that any sign of a selloff would lead to a rout.

“This is going to be the first ‘welcome to crypto’ day for a lot of new entrants,” said Stephane Ouellette, chief executive and co-founder of FRNT Financial. “The history of these assets has been littered with aggressive rallies and sickening selloffs.”

The biggest question for the wider investment community is “who are the new entrants to crypto?”. There are two large new groups of investors. Retail investors, flush from US government stimulus checks, bought cryptos in size in the first quarter. Institutional investors, desperate for an “uncorrelated asset” also jumped in and helped fuel the appreciation in value to $1.9 trillion for the entire crypto sector at its peak.

How are those new investors feeling now? A good many sold today and over the last few weeks, but now they are sitting on large losses in their trading accounts. For every seller there is also a new buyer who is acutely aware of the price.

This is where the contagion risk comes in. The first order of contagion is from bitcoin to ethereum and then on to the other alt-coins. The second order contagion is into the stock market. Many institutional investors are reluctant to talk about the size of their crypto holdings but an asset does not approach $1 trillion market cap without some people taking big positions. They now have big losses in part of their accounts and heavily appreciated assets in mega-cap stocks like the FANGs and last year’s stay-at-home winners.

Bitcoin peaked in December 2017, Ethereum peaked in mid-January and the stock market hit a meaningful peak in late January 2018. That Wall Street peak coincided with the appointment of a new Fed governor, Jay Powell, and the continuation of the quantitative tightening policies. However, the crypto market signalled a de-risking phase was already in place ahead of that event. 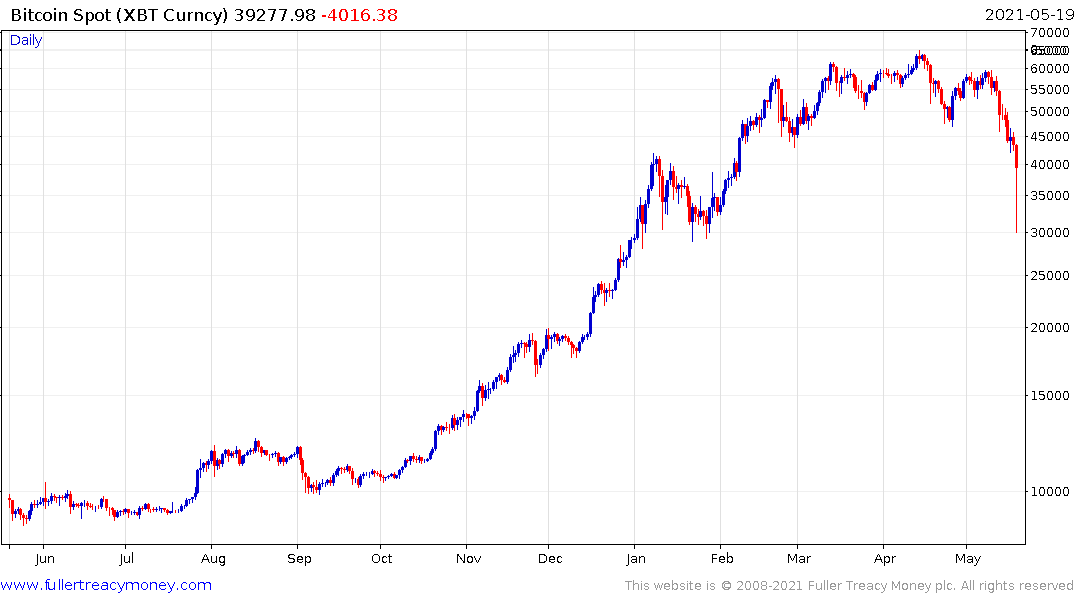 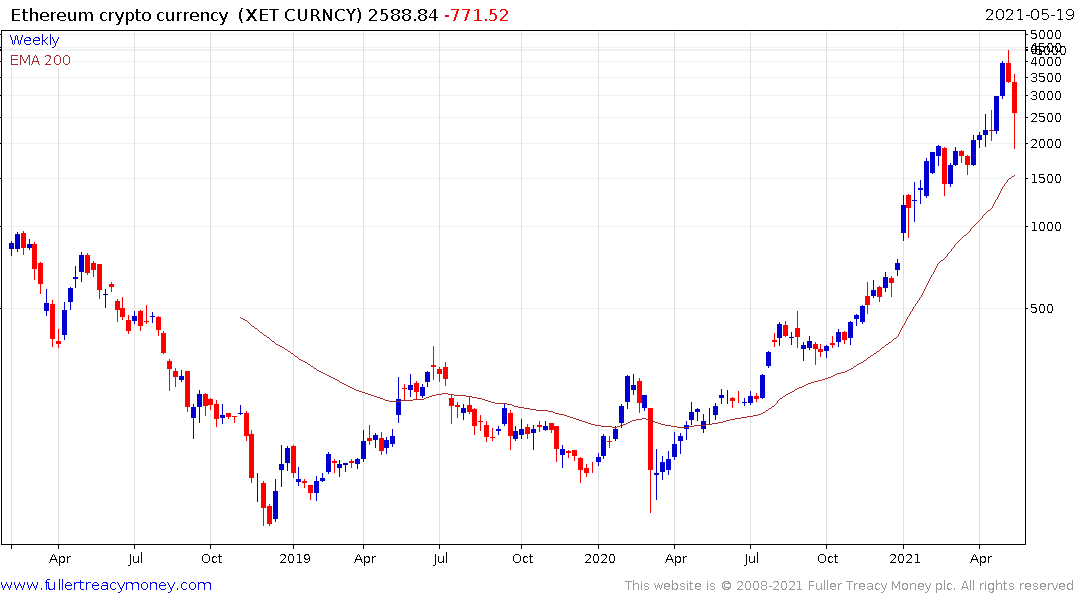 This year bitcoin peaked in April 14th. Ethereum peaked almost exactly one month later on May 13th and the Nasdaq-100’s all-time high was on April 24th. On this occasion the big concern is about rising government bond yields. Every time bond yields rise it puts pressure on speculative bets and vice versa. 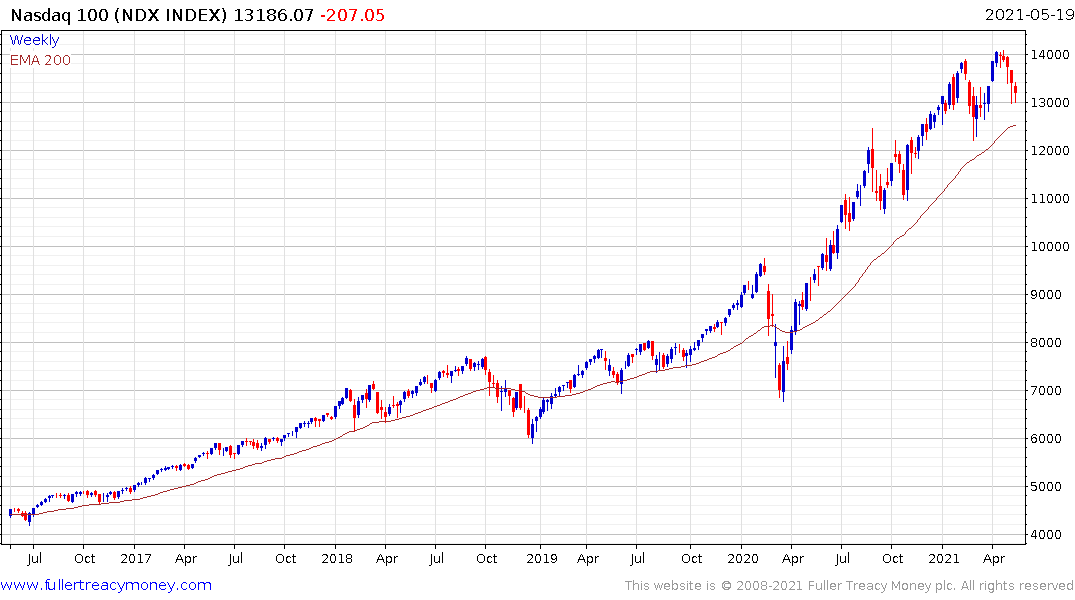 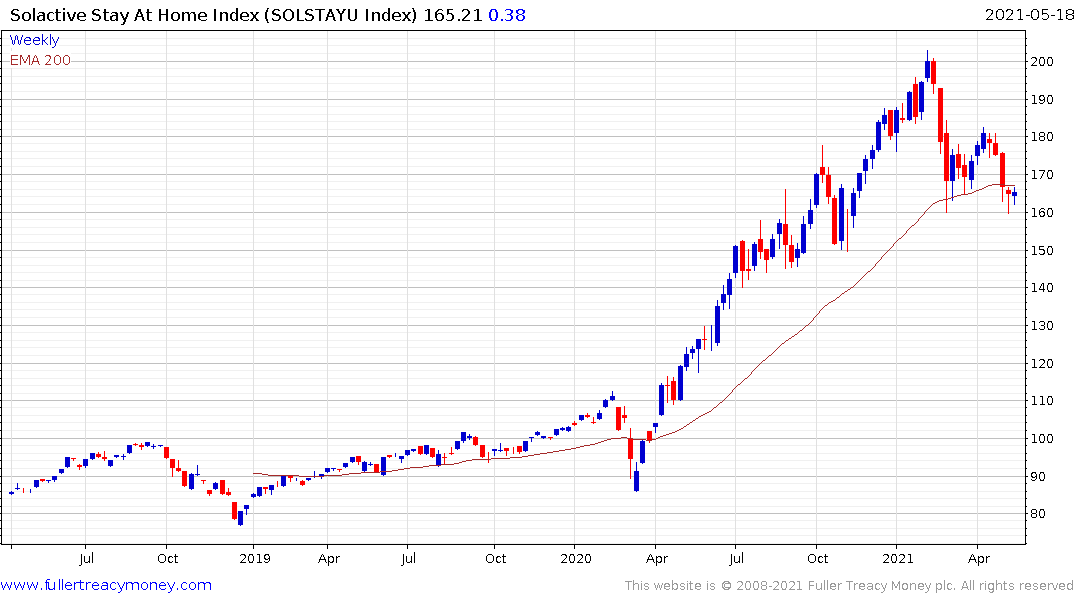 Investors are already on edge because momentum trades are unwinding. Everything from bitcoin to lumber, soybeans and carbon emissions have unwound accelerated trends. The Nasdaq-100 has already unwound most of its overbought condition relative to the trend mean and the Solactive Stay At Home Index is also in the region of its trend mean. How well they hold potential areas of support like the 200-day MA will be influenced by whether bonds yields break on the upside. 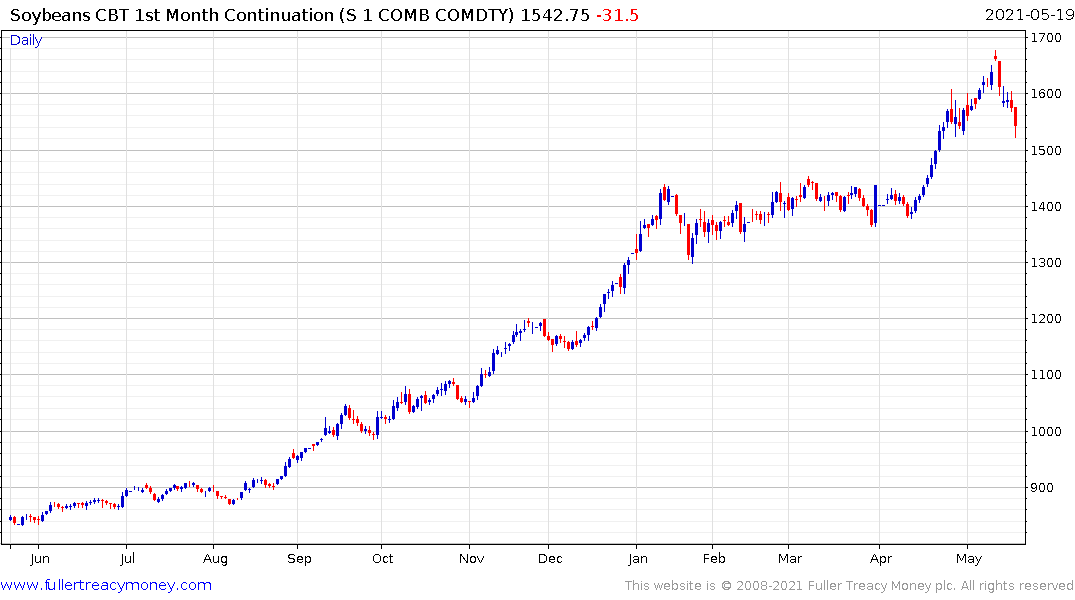 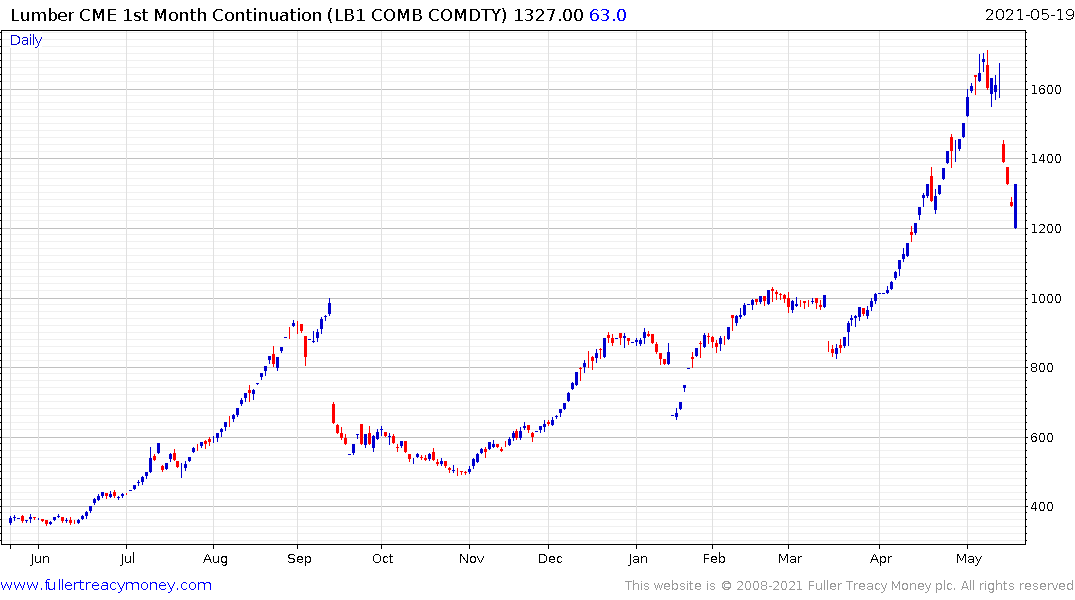 Lumber reversed a limit down move to close limit up today suggesting at least a short-term low. Bitcoin and ethereum also rebounded impressively from intraday lows as dip buyers re-entered the market following massive declines. Some steadying is possible but this continues to look like a completed top formation. 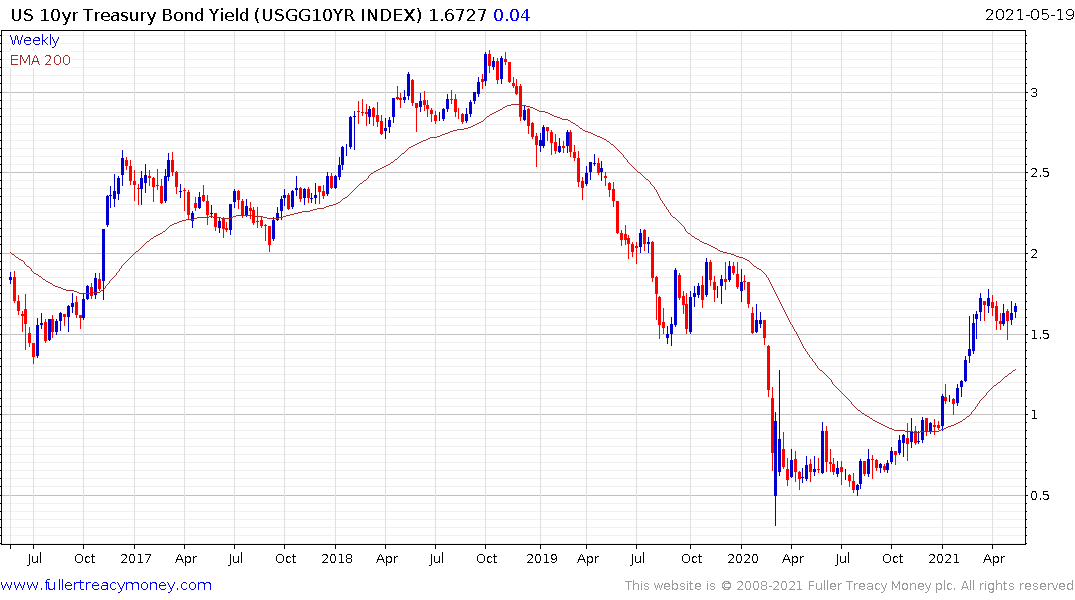 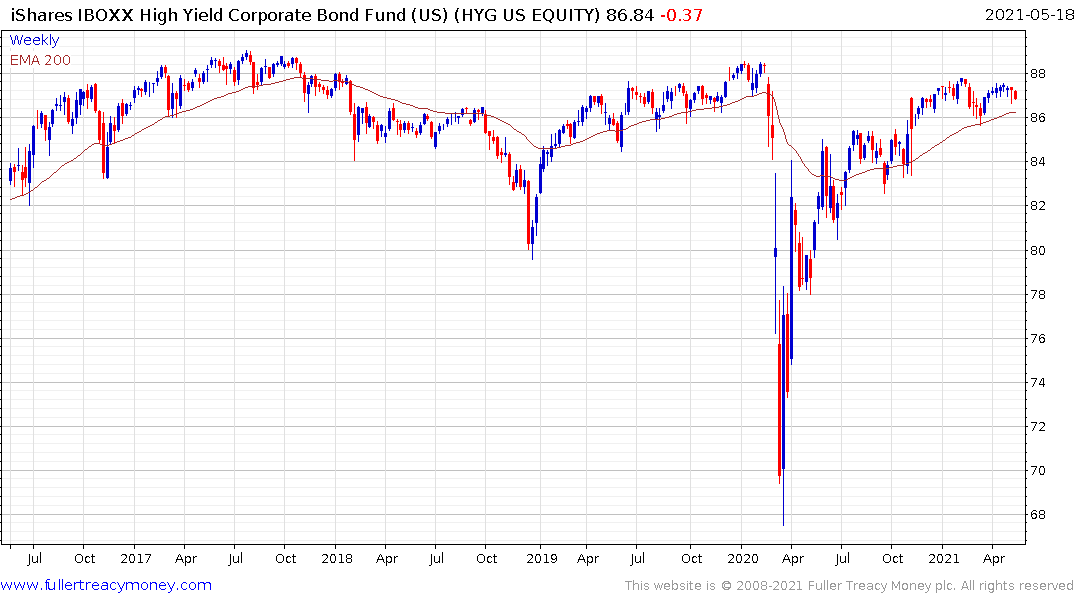 Perhaps the most attractive short hedging opportunity resides in high yield debt. Spreads are still at historically narrow levels and the trend is overextended. The iShares iBOXX High Yield ETF is also testing its 200-day MA but is susceptible to acute bouts of volatility when risk-off prevails. 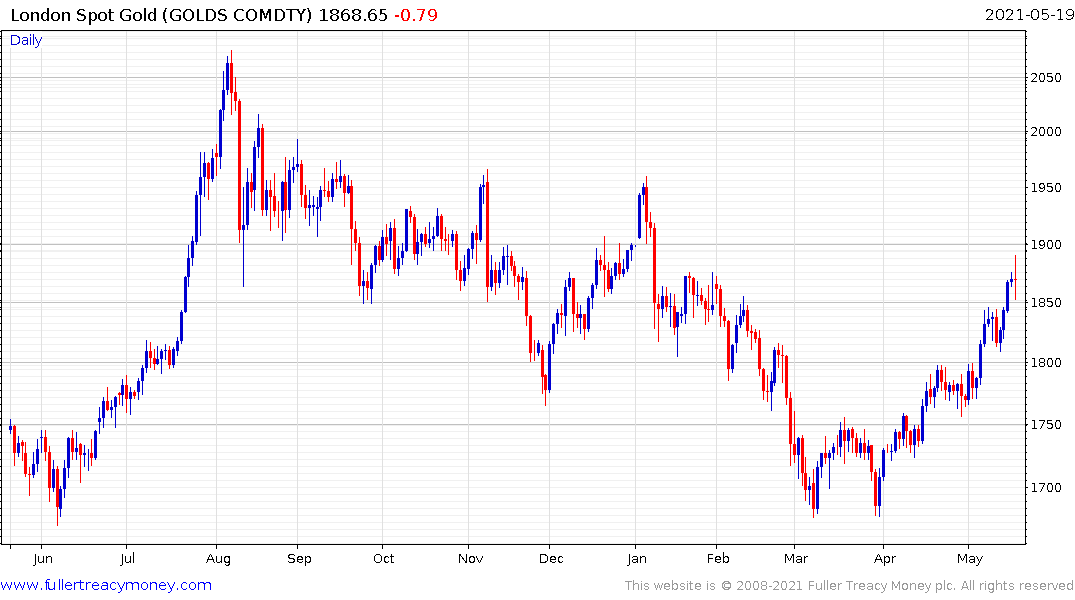 Gold on the other hand is a standout for it recent return to relative strength.