Bitcoin Holds Near Record, Ether Surges Amid Crypto Rally
Comment of the Day

Bitcoin held near a record a day after breaching $34,000 for the first time while Ether, another digital currency, also surged as the crypto rally continues.

“What we’re seeing is the standard moving of the crypto markets from Bitcoin to the Altcoin market led by Ether,” said Vijay Ayyar, head of business development with crypto exchange Luno in Singapore. “This rotation happens usually when Bitcoin has a large rally and investors rotate profits” into other digital coins, he said.

Bitcoin eclipsed its 2017 high late last year and only hit $20,000 for the first time in the middle of December. Proponents of the world’s largest cryptocurrency argue that it’s muscling in on gold as a hedge against U.S. dollar weakness and inflation risk, citing evidence of growing interest among institutional investors.

Skeptics view the digital asset’s more than 300% surge over the past year as a risky bubble fueled by investors chasing the momentum in crypto prices.

Bitcoin and Ethereum has experienced one of the more impressive Santa Claus rallies ever with a major surge between Christmas Eve and this weekend. The big question that will be occupying the minds of anyone monitoring the market is whether the move is now over or are we seeing the first consolidation following a breakout?

The volume of capital entering the market and the enthusiasm of those seeking either a hedge against financial repression or a diversifying alternative asset have helped to spur institutional demand. The excess savings of retail investors have also been a significant input for the price appreciation. Meanwhile the limited supply argument for bitcoin was burnished this year following the cyclical halving of the reward for minting a new block.

In attempting to answer the big question I believe the answer lies not in who is buying but in how they buy. Futures volume has surged over the last month to more than 10,000 contracts on three separate occasions. There was $440 million in trades via futures today but that is still only about a third of the cash value of trading.

Therefore, log scale charts which show percentage gains and losses are going to continue to be the most useful way of monitoring the price movement.

The big consistency characteristics are that following crashes the price has found support in the region of the 1000-day MA. That coincides with the $8000 area today.

The second is that during the big advance in 2016 and 2017, consolidations of 40% were the norm and represented buying opportunities. At present the price is pausing in the region of $35000. To date this reaction, at 19.47% is similar to the reaction in September at 21.01%. If the earlier size of a reaction were to be repeated a reaction lows $20000 is possible.

The only conclusion to draw therefore is that the low today may mark the nadir of this short-term consolidation but a further reaction cannot be ruled out. A sustained move below $20000 would be required to question the consistency of the medium-term move. 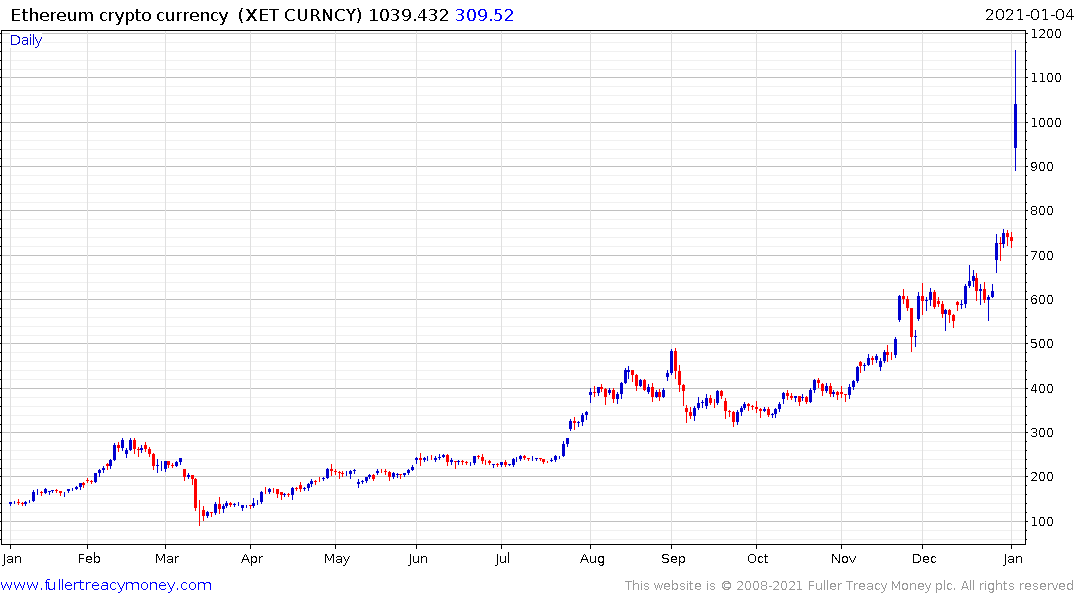 Ethereum extended its uptrend in impressive form over the weekend and some consolidation in the region of the psychological $1000 is to be expected.