The difference between the current bitcoin bubble and past recent ones, such as the dot-com episode spanning the period over 1995-2000, is that shell companies were at least promising some type of future revenue stream. Bitcoin would escape such a valuation approach had it proven to be a medium of exchange or satisfied the condition for a numeraire off of which other goods would be priced. But currently it is not, as we will see next.

Success in Wrong Places
More generally, the fundamental flaw and contradiction at the base of most cryptocurrencies is that, as we saw, the originators, miners, and maintainers of the system currently make their money from the inflation of their currencies rather than just from the volume of underlying transactions in them. Hence the total failure of bitcoin in becoming a currency has been masked by the inflation of the currency value, generating (paper) profits for large enough a number of people to enter the discourse well ahead of its utility.

Comment 2: Success for a currency There is a conflation between success for a "digital currency", which requires some stability and usability, and speculative price appreciation.

Transactions in bitcoin are considerably more expensive than wire transfers or other modes, or ones in other cryptocurrencies, and order of magnitudes slower than standard commercial systems used by credit card companies —anecdotally, while you can instantly buy a cup of coffee with your cell phone, you would need to wait ten minutes if you used bitcoin. Nor can the system outlined above —as per its very structure accommodate a large volume of transactions –something central for an ambitious payment system. To date, twelve years into its life, in spite of the fanfare, with the possible exception of the price tag of Salvadoran permanent residence (3 bitcoins), there are currently no prices fixed in bitcoin, floating in fiat currencies in the economy.

Bubbles make fools of everyone. It’s really only a question of whether one is a fool at the beginning, middle or end. It is exceptionally rare, though not unheard of, for someone to spot the beginning of a trend and hold on all the way through and sell right at the end. Even with the best foresight and discipline you also need the luck of the big trend. For the majority, they don’t believe at the beginning and will react violently to doubt at the end. That’s how manias have played out repeatedly throughout human history.

Bitcoin is one of the most spectacular bull markets in history and is also remarkable for being truly global in its reach. The democratisation of access has allowed the sector’s market cap to approach the scale of the most utilitarian of assets including stock markets and oil. However, how much of that has been enabled by money printing?

To achieve the most ambitious forecasts of the bitcoin prophets, the price will need to rise more than ten times from current levels. That would require at least another $5 trillion to be devoted to the cause. Where will that money come from? To support that level of money creation, we will need to see a global crisis greater than the pandemic. That does not appear likely in 2021. 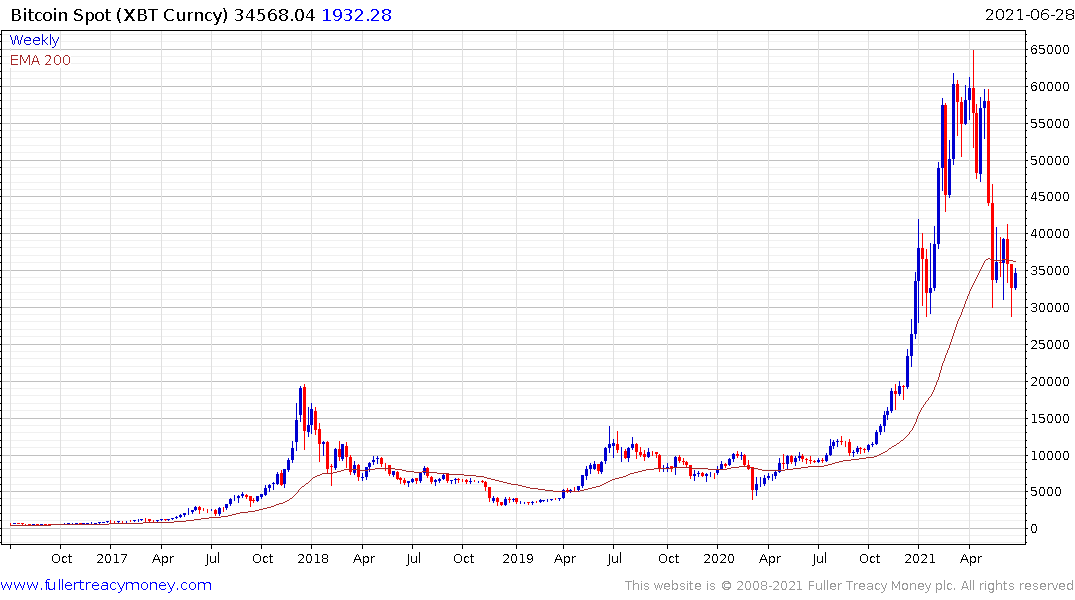 Bitcoin rebounded over the weekend from the lower side of the developing range. Nevertheless, a sustained move above the 200-day MA will be required to signal a return to demand dominance beyond the short-term.