The Switzerland-based BIS, which promotes cooperation among the world’s monetary officials, used its annual economic report to urge politicians to “ignite all engines” to overcome a global soft patch. They should make structural reforms and strengthen fiscal and macroprudential measures, instead of relying on ever-lower interest rates in a debt-fueled growth model that risks turbulence ahead.

“The continuation of easy monetary conditions can support the economy, but make normalization more difficult, in particular through the impact on debt and the financial system,” the BIS said. “The narrow normalization path has become narrower.”

U.S.-led protectionism has dented economic confidence and slowed growth, forcing central banks to prepare to ease policy again even if they haven’t yet returned to their pre-crisis settings. The Federal Reserve and the European Central Bank are expected to cut interest rates this year, while nations including Australia, Russia, India and Chile have already started.

Economists at Citigroup Inc. estimate that while fiscal policy in the major industrial countries will be expansionary this year it will be less so in 2020 as past measures in the U.S. wear off.

There is a confluence of factors that are leading to support for Modern Monetary Theory. On the one hand we have central banks stating that the fuel from monetary accommodation is not as effective any longer. They are telling governments to engage in fiscal stimulus and decluttering of the regulatory environment to boost growth. Governments for their part are saying to central banks that they will pursue massive deficit spending if interest rates don’t shoot up immediately afterwards.

Perhaps the most important consideration is the quantity of debt outstanding against which this discussion is taking place. It would be characterised as downright unpatriotic for the central bank to raise rates aggressively without a clear inflation bias, especially when the rise the populism and an uncertain geopolitical background support a national interest bias to easing. That sets the stage for greater co-operation between governments and central banks which is the central theme of MMT.

The ECB is heading progressively further towards additional monetary accommodation because they deem fiscal stimulus to be incompatible with the effort to realign debt/GDP ratios. The Fed has already signaled they are going to cut rates later this month. The Bank of Japan has been letting up on its stimulus but will not tolerate a stronger Yen if the other major central banks are easing. Meanwhile China continues to run a massive fiscal deficit.

If monetary policy beats most other factors most of the time, the fact central banks are reacting to soft economic data could well save this expansion and further extend it into bubble territory. Nevertheless, investors remain unconvinced they will be quick enough to arrest the risk of contraction. That view overshadowed sentiment today with the commonality in contracting PMI data leading people to think 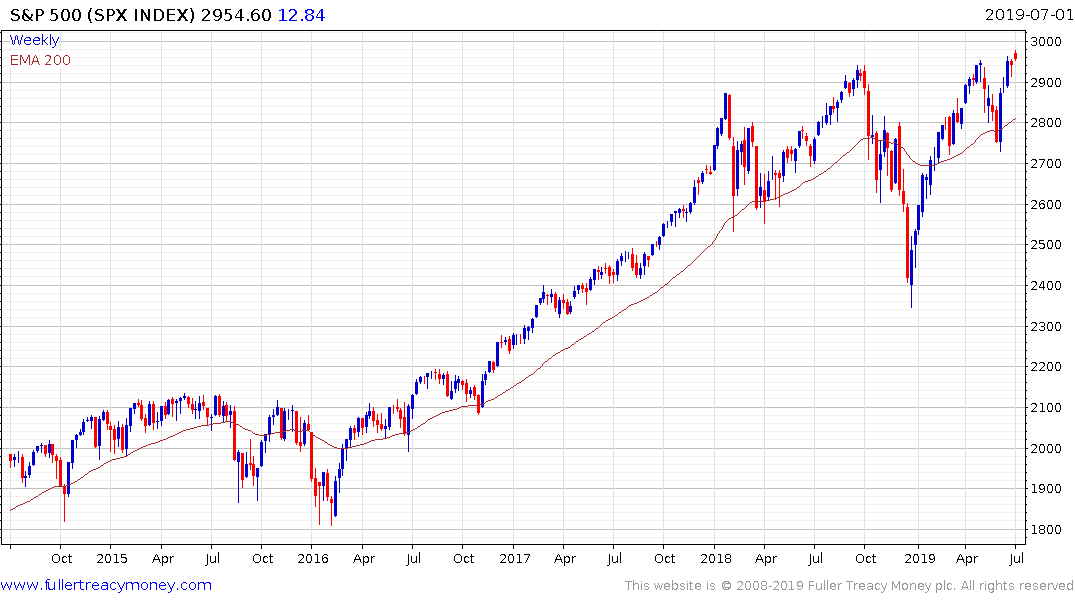 The S&P500 opened at a new high today. The question now is how well it will sustain the move. A sustained move below the 2700-point level would be required to question medium-term scope for continued upside.