Reliance Jio emerged the highest bidder for assets and the sale is expected to be closed in a phased manner between January and March 2018, according to a statement from RCom on Thursday.

The companies didn’t disclose a value for the transaction. The deal will include a cash payment and transfer of deferred spectrum installment payable to India’s Department of Telecommunication.

Mumbai-based RCom is seeking to cut total borrowings by $6 billion by March. RCom posted its first annual loss last March after Jio stormed into the market by offering free calls and data. That escalated a price war that has forced consolidation in the sector. RCom this week said it expects to get about 250 billion rupees ($3.9 billion) from the sale of its spectrum across four frequencies, its optical fiber network, and its more than 40,000 telecom towers. Entire proceeds will be used for repayment of RCom’s debt.

Reliance Jio is only paying for good quality assets that will enhance its depth of network, especially in rural areas, and raise data usage capacity, Shobhit Khare, a co-founder at Inertia Wealth Creators LLP, said via phone.

Reliance Industries spent a great deal of time developing a 4G network (Jio) and is now reaping the benefits. Reliance Communications, by selling its mobile assets, is essentially exiting the mobile telecommunications business. This article from livemint.com details where management see the company focusing next:

RCom will essentially be transformed from a business-to-consumer (B2C) into a business-to-business (B2B) entity, which will provide submarine cable systems that will deliver the latest sub-sea cable technology to meet growing cloud infrastructure and data capacity demand from global enterprises and over-the-top, or OTT, service providers.

Ambani said the new RCom will be valued at Rs15,000 crore. The business, he said in a presentation, will be based on a capex-light model and will generate sustainable cash flows, with 50% of revenue and 60% of operating profit coming from outside of India.

Reliance Communications had been priced as if it were about to go out of business so the sales of assets to pay down debt will at least delay that outcome. The share rallied this week to break successfully back above the trend mean and a sustained move below INR20 would be required to question potential for additional upside. 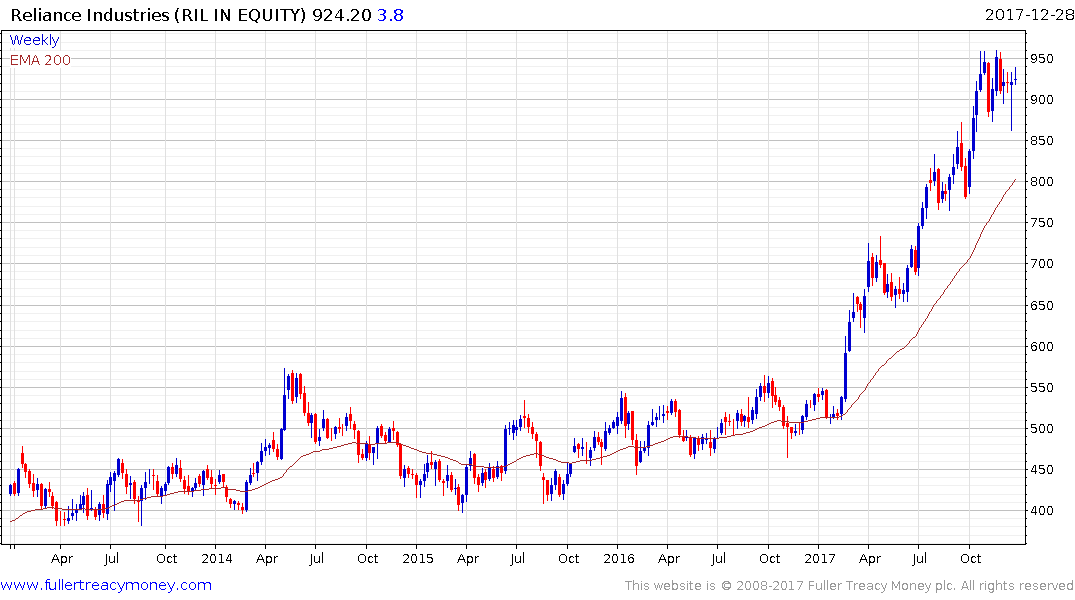 Reliance Industries broke successfully out of an eight-year base earlier this year and continues to trend higher in a reasonably consistent manner; with a succession of ranges one above another.

The much broader point is that intense competition within India’s telecommunications sector has delivered cheap efficient high-speed internet connectivity to hundreds of millions of people who were previously excluded from participation in the economy. 4G is therefore a long-term enabler for economic growth and an integral part of India’s long-term potential for development.