“In the short term, biotech goes through these manic-depressive periods. It’s an extremely volatile group,” Kaul said Tuesday in a phone interview before the debate. “I’d like to really use this as an opportunity to upgrade names, to buy the better names at better prices.”

“Fear can turn into greed very quickly,” he said. “Some of these companies are approaching double-digit free cash flow yields, and you’re paying little for pipeline success.” Because the downturn was widespread, Kaul said he’s excited about his stakes in smaller companies that were especially hard hit over the past few weeks. He declined to discuss individual companies.

The Nasdaq-100 has been consolidating in the region of its year 2000 peak for the last few months and that pause may take a while longer to build support before a meaningful breakout can be sustained. At such an historic level it is worth considering that valuations today are nowhere near what they were at the height of the TMT mania.

Biotech was among the sectors that surged in the late ‘90s as the promise of futuristic products and treatments ignited investor interest. It has taken more than a decade but we are now in sight of some of those promises being realised. That does not mean the sector was fairly priced earlier this year when it surged well above its trend mean but it does suggest meaningful pullbacks represent opportunities to participate in a major growth sector are more reasonable levels. 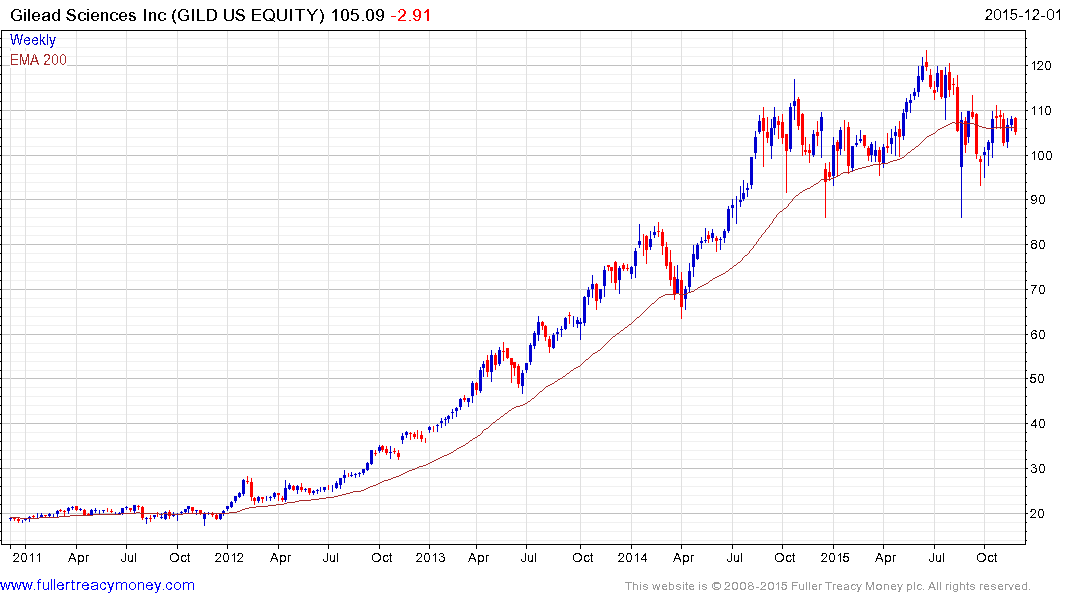 There is a high degree of variability in the performance of related shares. Gilead Sciences has been relatively inert, supported by compelling valuations, but will need to hold the $95 area if this range is to avoid top formation characteristics. 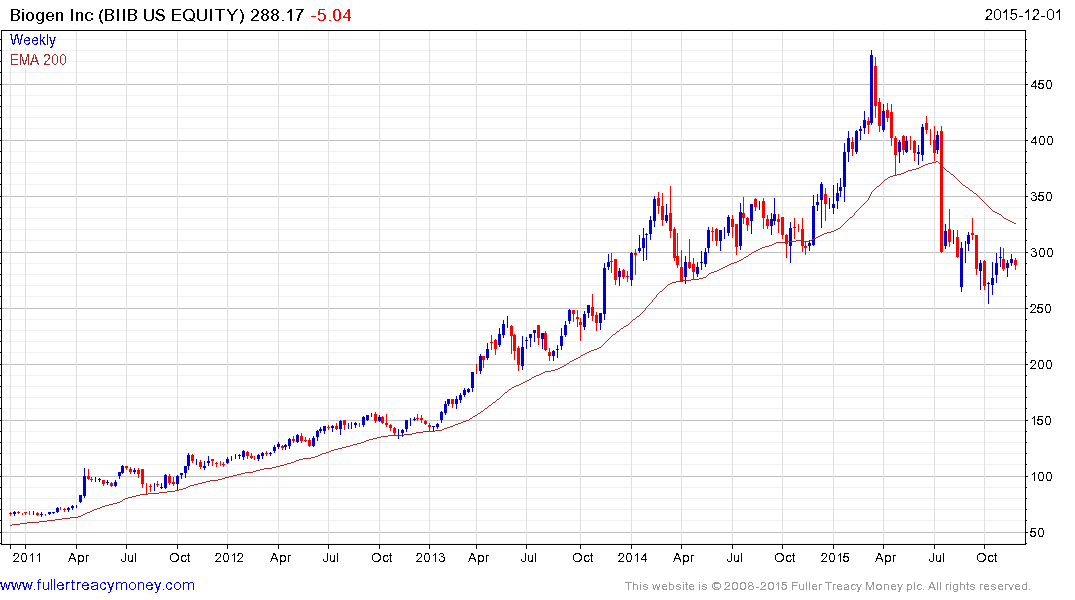 Biogen encountered resistance below $500 following an accelerated advance earlier this year and halved before finding near-term support from October. A process of mean reversion is underway but a sustained move above the trend mean will be required to signal a return to demand dominance beyond the short-term. 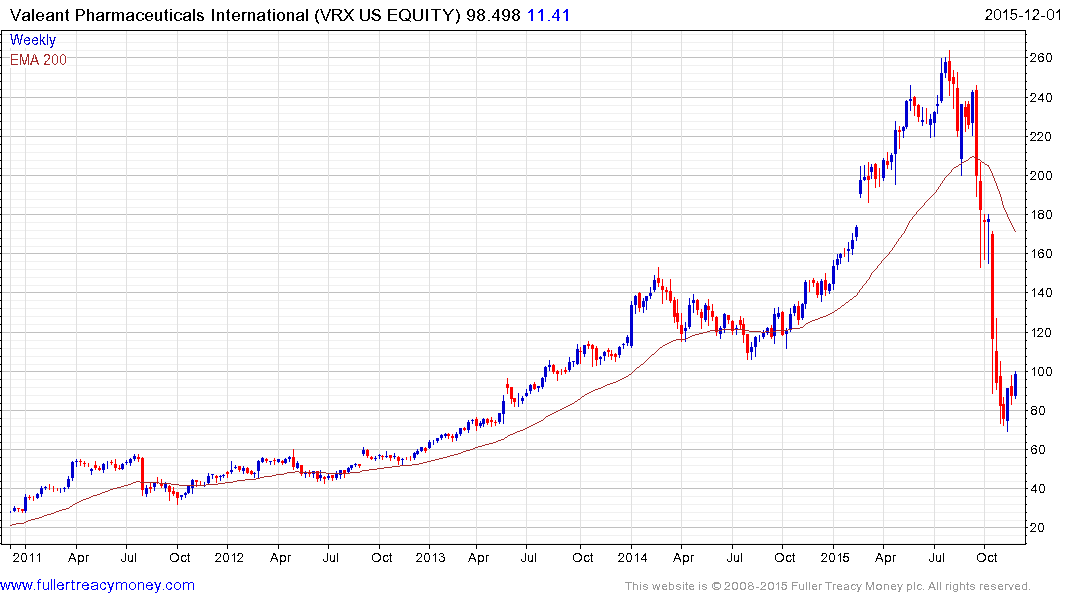 Valeant Pharmaceuticals crashed lower amid a storm of negative media coverage before posting an upside weekly key reversal two weeks ago. A sustained move below $75 would be required to question support building and possible mean reversion. (In the interests of full disclosure, I have a long position in Valeant). 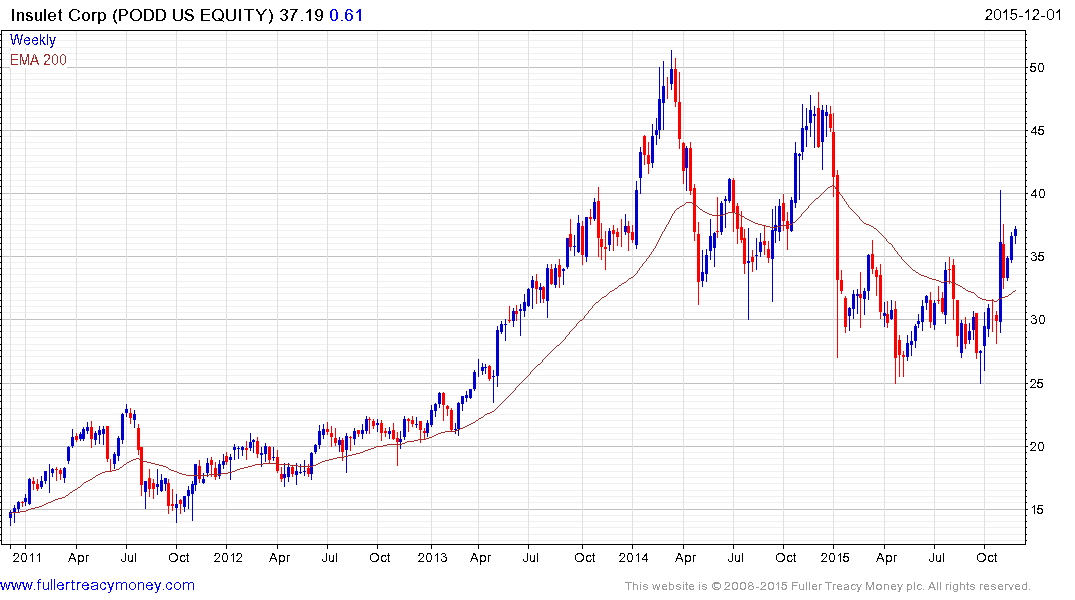 Insulet did not take part in the run-up earlier this year but surged out of an almost yearlong base in November and a sustained move below $34 would be required to question potential for additional upside. 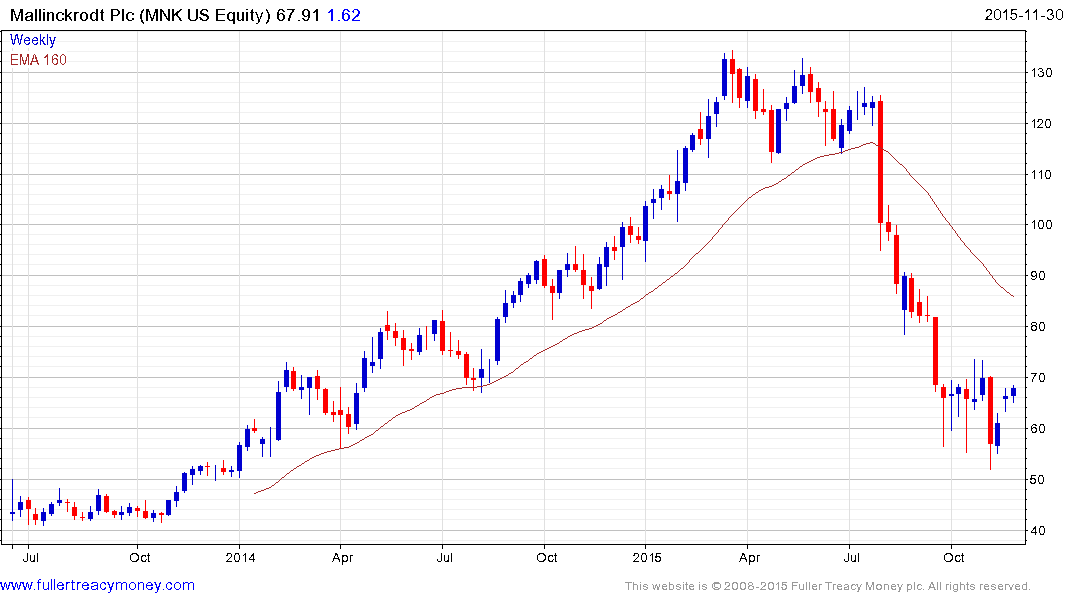 Malinkrodt, with an estimated P/E of 9, continues to firm from the $60 following a steep decline.