But there’s a dark cloud in Amazon’s figure. The growth of Amazon’s total merchandise sales slowed considerably last year, according to Bloomberg Opinion calculations based on Bezos’s disclosures. This figure is not the first sign than Amazon’s retail juggernaut may have slipped a bit.

Elizabeth Warren is campaigning on the platform of splitting up Amazon and the more sectors it competes in the louder that call will be. However, while a populist assumption, it is not accurate to state Amazon is going to completely control retail. The shop online and pick-up market for goods is thriving and conventional retailers are outperforming Amazon.

Meanwhile the demise of overleveraged retailers was inevitable but has been accelerated by the entry of competitive forces like Amazon. At the same time new entrants are springing up offering hybrid models or online and physical locations. That is why Amazon is so intent on boosting its physical footprint.

Against a market environment where Amazon is growing but not as quickly, there is a clear trend towards squeezing suppliers. The costs of goods sold for Amazon sellers increased considerably last year. Additionally, the US Postal Service now charges regionally for small packages versus a national flat rate which also increases costs.

The upshot of the judgement against Wayfair and how tax is computed for online sellers across state borders will likely result in significant tax liabilities from June of this year according to an email I received to from Amazon relating to Mrs. Treacy’s business. That is putting pressure on sellers to raise prices. That is happening across the board so it is reasonable to expect to experience inflation this year. Quite whether that is measured by CPI is another question. 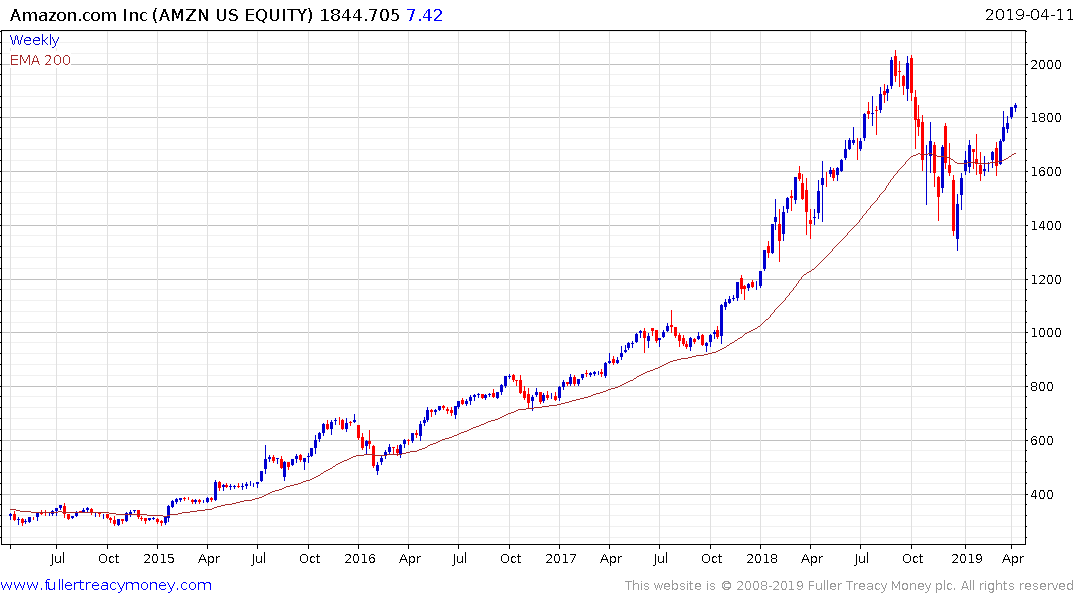 The share has broken its sequence of higher reaction lows and has pulled away from the region of the trend mean. A sustained move below $1650 would be required to question support building.