Best and Worst of 2018 by Eoin Treacy

The big drawdown that began in January represented a major inconsistency for what had previously been an impressively consistent trend. The subsequent ranging belied the churning that was taking place inside the major Wall Street indices as leadership narrowed to focus on the mega-cap technology companies.  Facebook peaked in the summer and Apple in October and that was one of the causal factors in the ensuing sell-off as large cap underperformance weighed on ETFs. 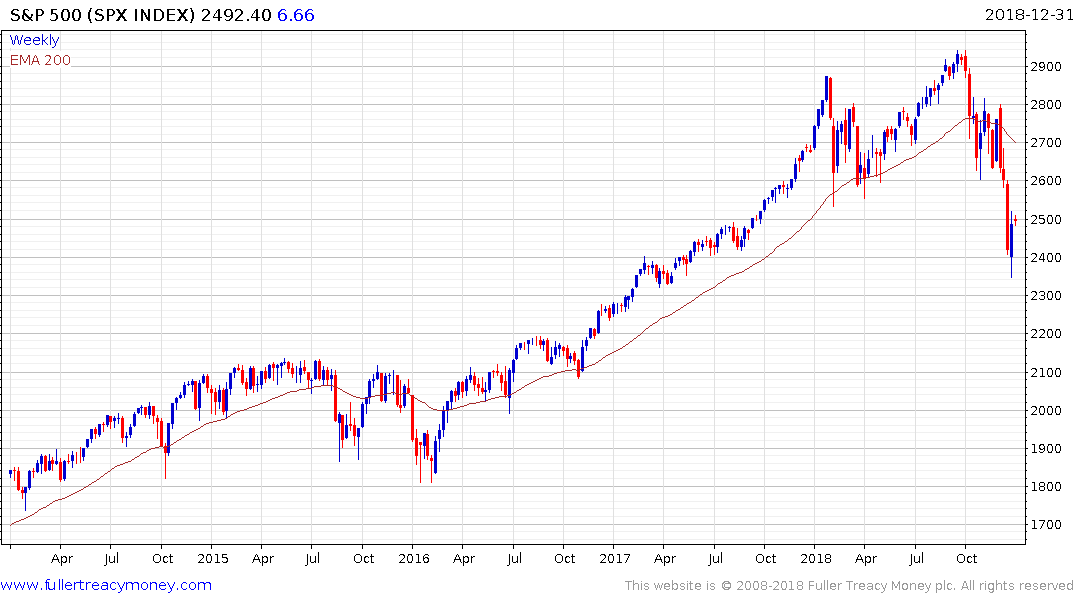 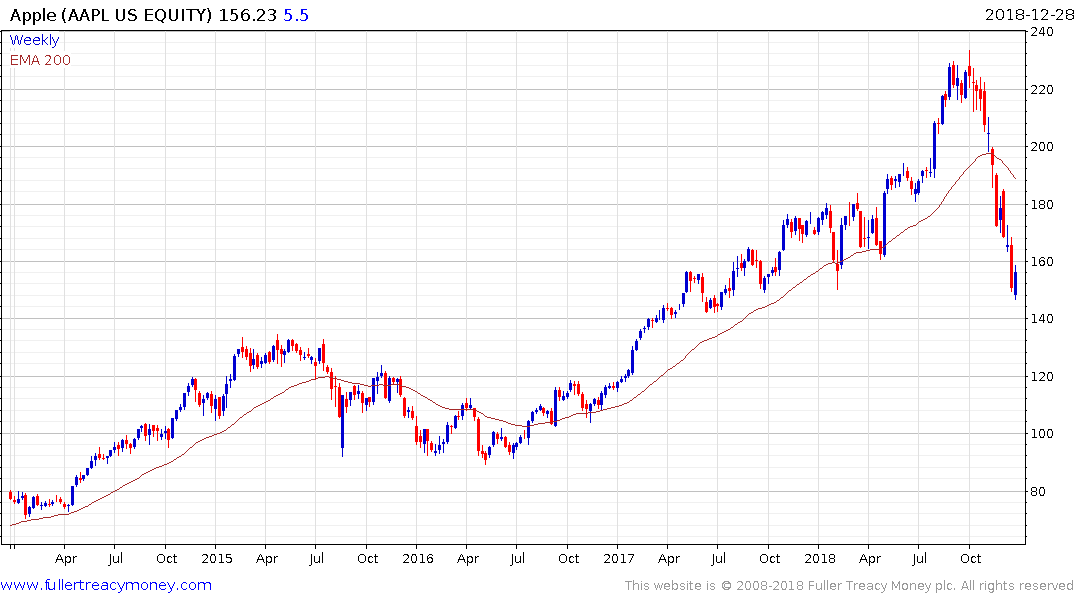 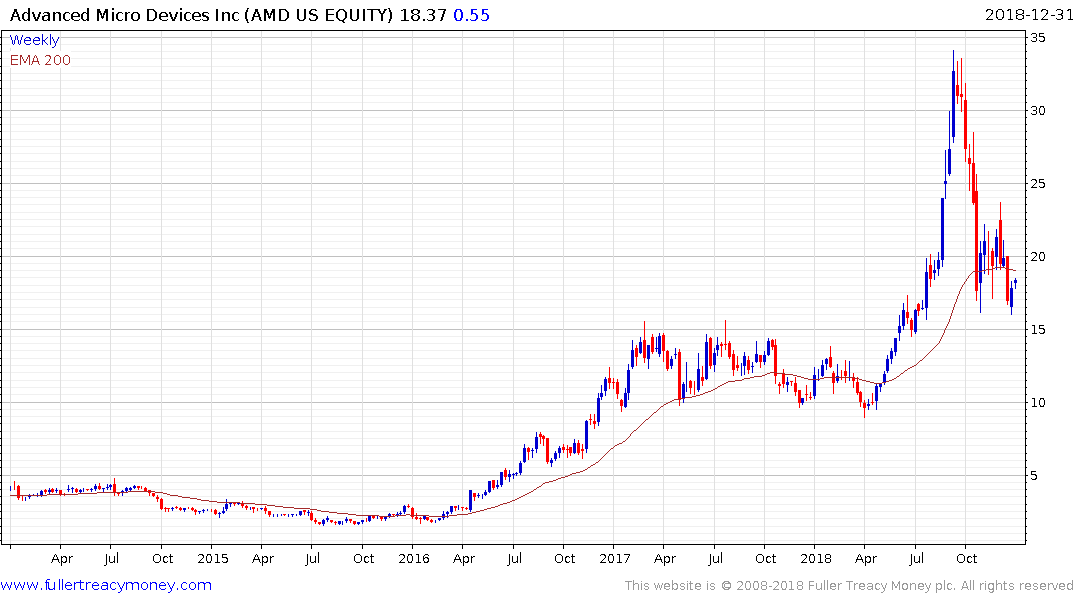 The fact that Advanced Micro Devices was the best performing share on the S&P500 this year is a testament to the extraordinary volatility we have seen in single stock names. The share opened in January at $10.42, peaked in September at $34.14 and closed today close to $18.32. 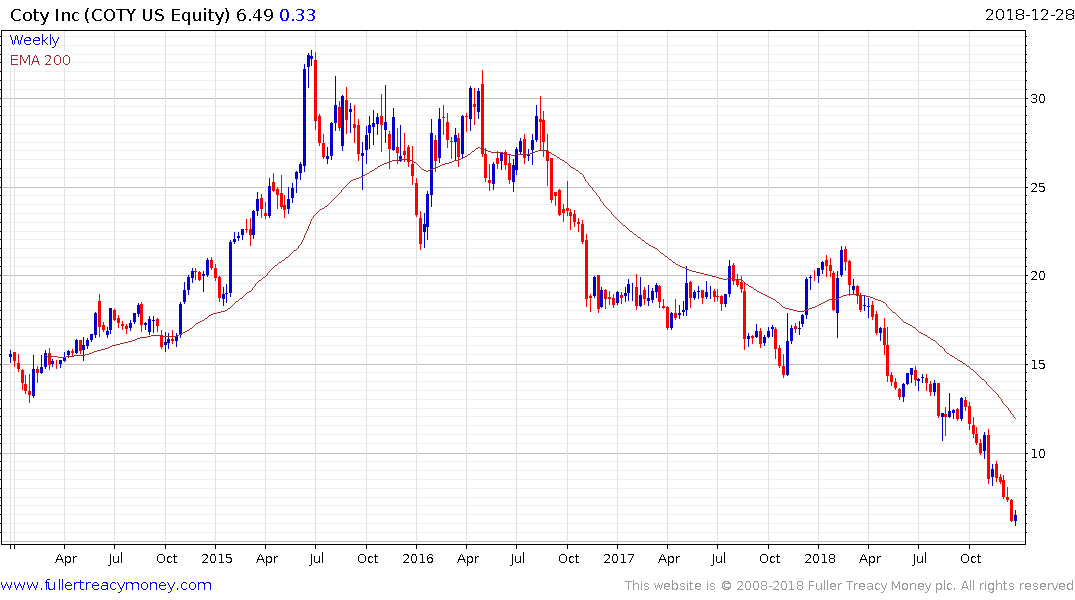 Coty was the worst performer with supply chain trouble and cost of relaunching brands like CoverGirl and Clairol weighing on sentiment. Competition within the cosmetics sector is vigorous but the company is trading on a price to sales ratio of 0.5 and a price to book of 0.57. The biggest risk is to the dividend which at a yield of 7.62% looks bloated. The share is currently almost 50% below its trend mean and has shown initial signs of steadying. 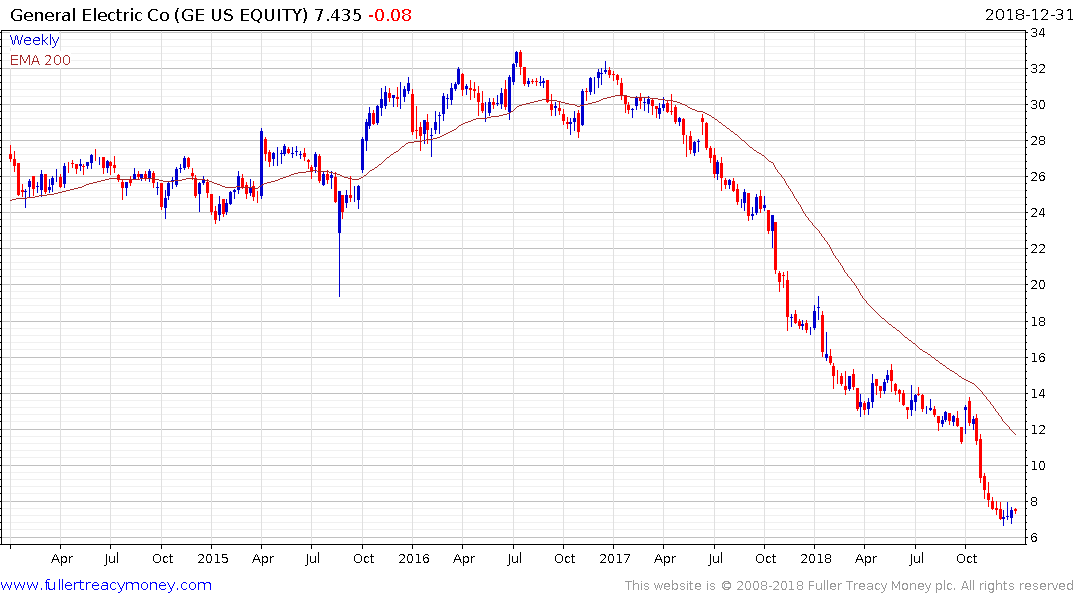 GE has made headlines for its 2018 collapse but the company has a new CEO, is selling off assets and is showing initial signs of steadying. 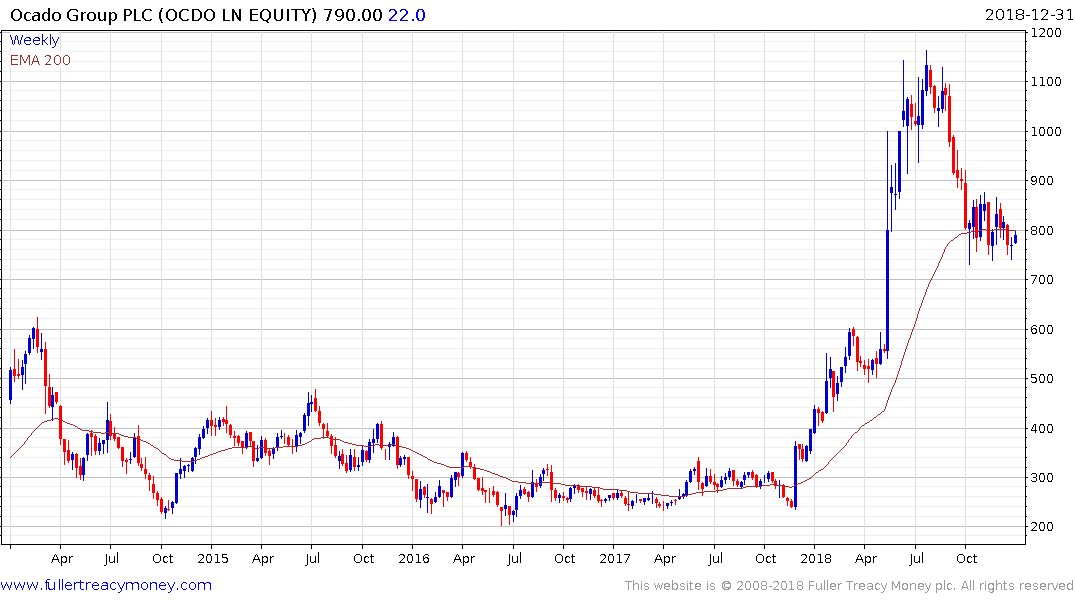 Ocado Group was the best performing share in the Europe STOXX 600 this year. The share peaked in July and has since unwound its overextension relative to the trend mean and has at least steadied recently. 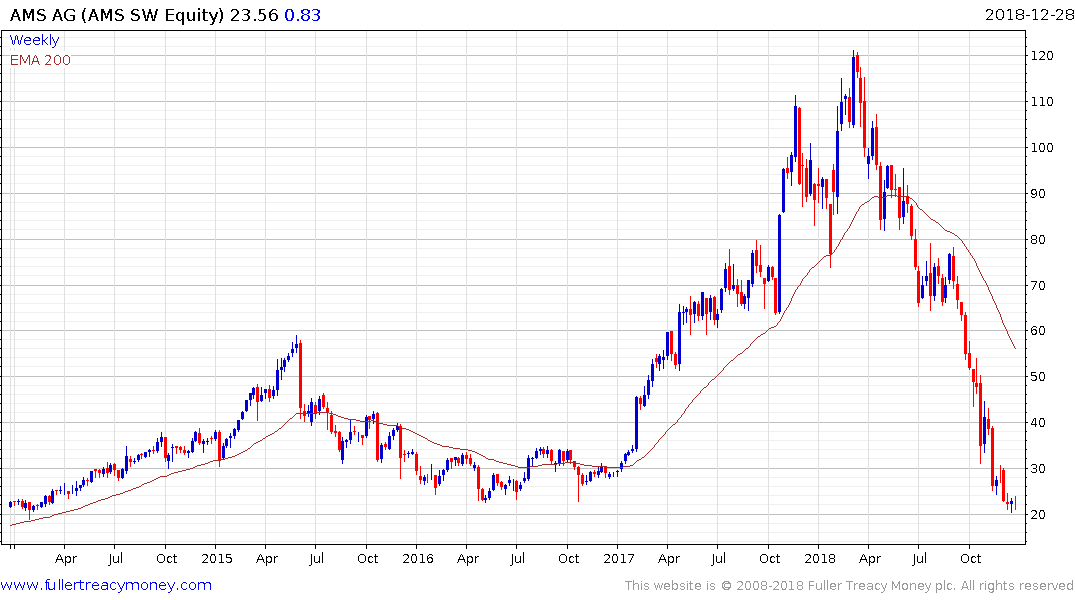 As an Apple supplier, AMS AG has been hit by the slowdown in global phone demand and the threat from tariffs and supply chain security resulting in it claiming the title of worst European performer in 2018. The share accelerated lower from its March peak near CHF120 to a low before Christmas of CHF20.31 where it has at least paused. 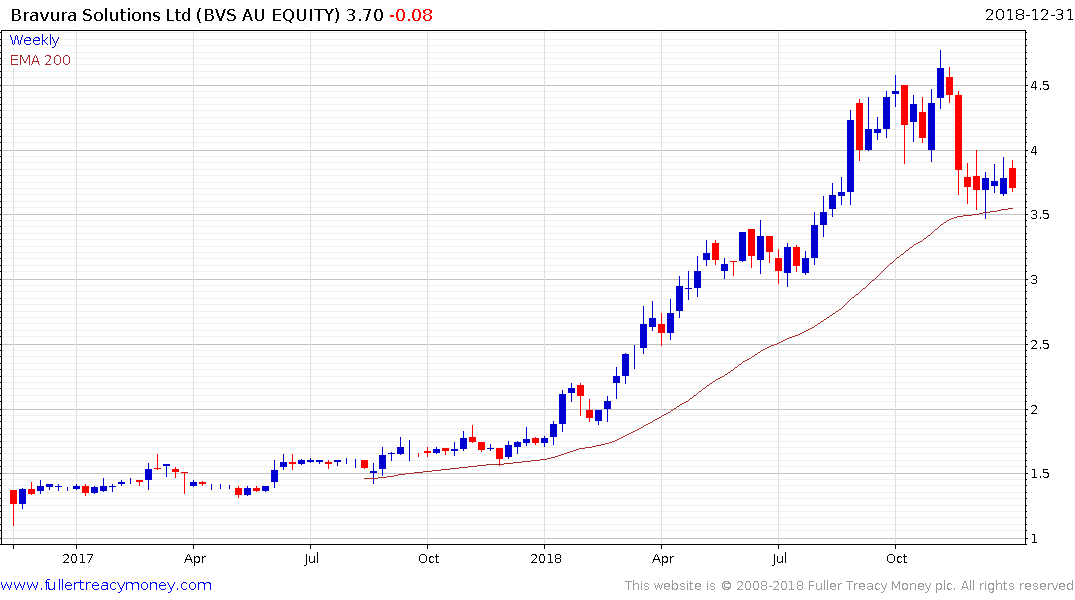 Australia’s best performer. Bravura Solutions, was trended higher in a very consistent manner until it posted a failed upside break in November and dropped to break its sequence of higher reaction lows. It has been ranging below that range for a month and is now pressuring the region of the trend mean; marking a significant loss of uptrend consistency. 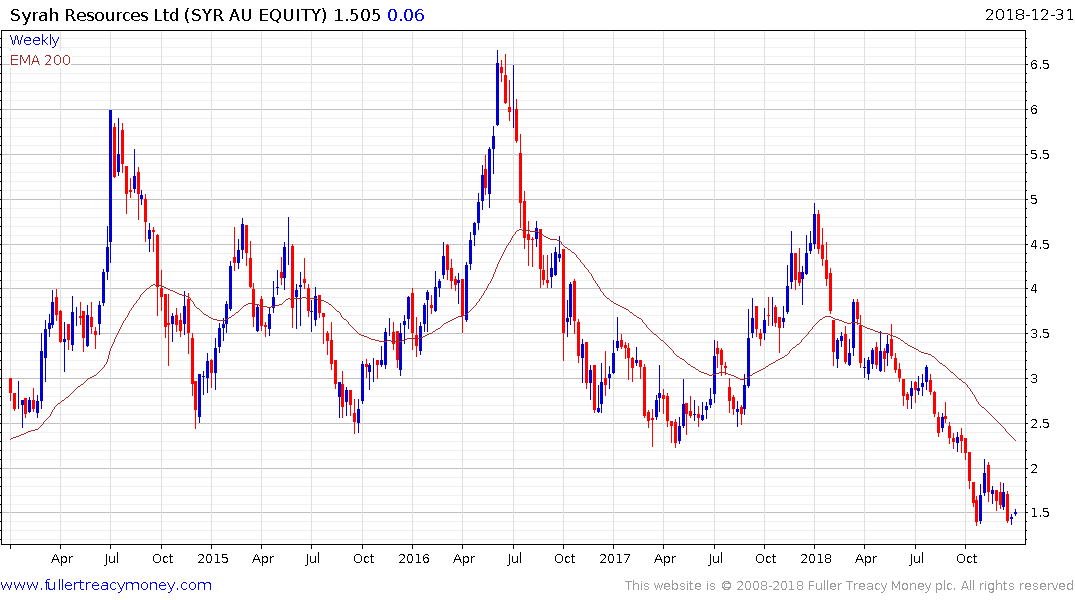 The worst performers were in the resources sector with Syrah Resources trending lower since early January. The share has also downward momentum since October.

The reason I highlight these winners and losers is because the end of the year is generally an all-change moment for investors where performance gets reset to zero and bargain hunting begins.