But the fact that the industry regulator can designate someone to the board of a prominent sector player may unsettle investors worried about the broader ramifications of Beijing’s clampdown. Even before Xi’s administration tightened its grip on the tech sector, ByteDance had grappled with American lawmakers’ accusations that TikTok in particular threatens national security and could aid Beijing in espionage efforts. In May, the month after the Chinese regulator took its stake, founder Zhang Yiming relinquished day-to-day control of his company to its closest lieutenant, a decision regarded as an attempt to distance himself from the growing turbulence at home and abroad.

“It intensifies worries about the government’s intentions for China’s internet sector and the concessions private firms may have to make,” said Michael Norris at consultancy AgencyChina. “It gives new context to Zhang Yiming’s decision to step down from his position as ByteDance’s CEO.”

It seems like the world is finally waking up to overt Communist Party control of Chinese corporations.  This has been going on for years. In 2019 the government placed party disciplinary officials in more than 100 large companies, including both Alibaba and Tencent. At the time that was viewed as an acceleration of the already existing trend. Here is a link to Comment of the Day on September 23rd 2019.

That action laid the ground work for the measures being put in place today. After a great deal of back-and-forth action, prices for these shares are almost back where they were in 2019. Ultimately, the Party will have board positions in every large company. Corporate independence is receding quickly into the distance, to be replaced by the reality companies are de facto organs of the government. 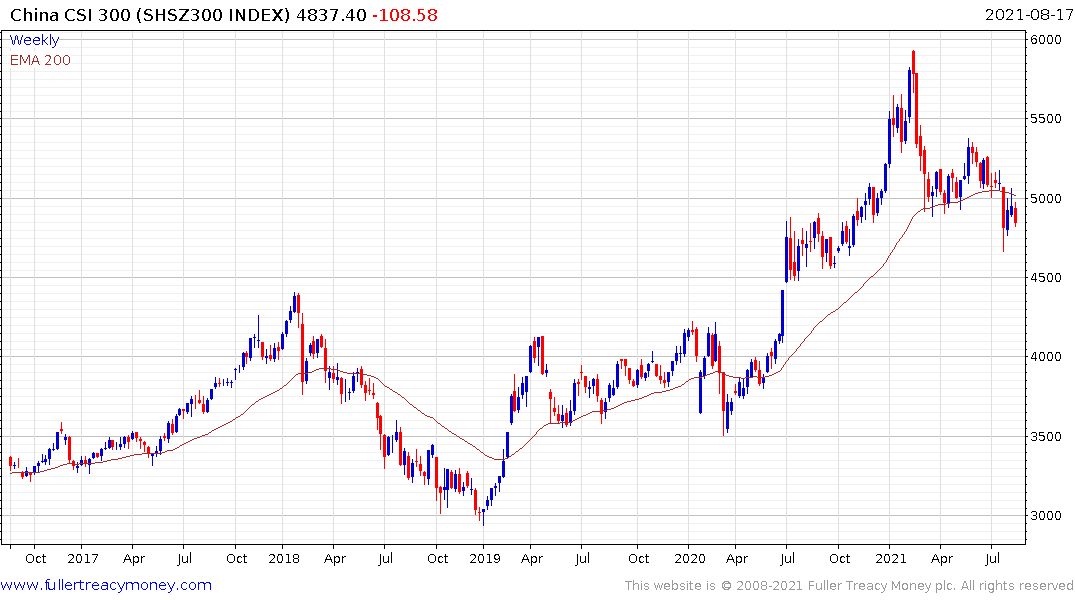 The CSI 300 encountered resistance last week in the region of the lower side of the overhead trading range and the 200-day MA. A sustained move above 5000 will be required to check potential for additional downside. 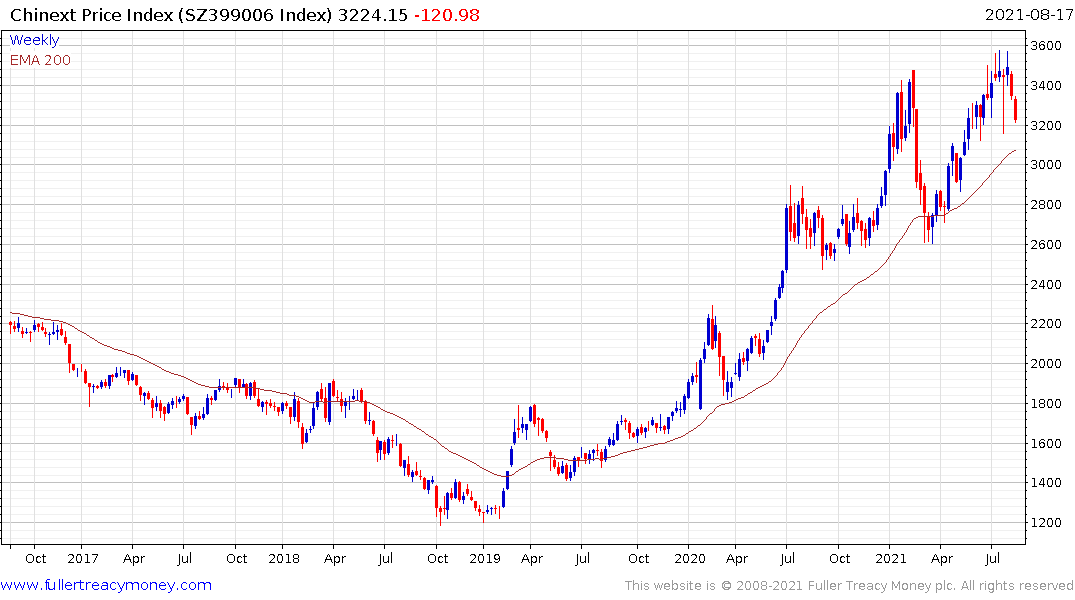 The ChiNext Index of tech-oriented small caps failed to sustain the breakout to new highs in July and continues to pull back into the underlying range. It will need to find support soon if the trend is to remain intact. 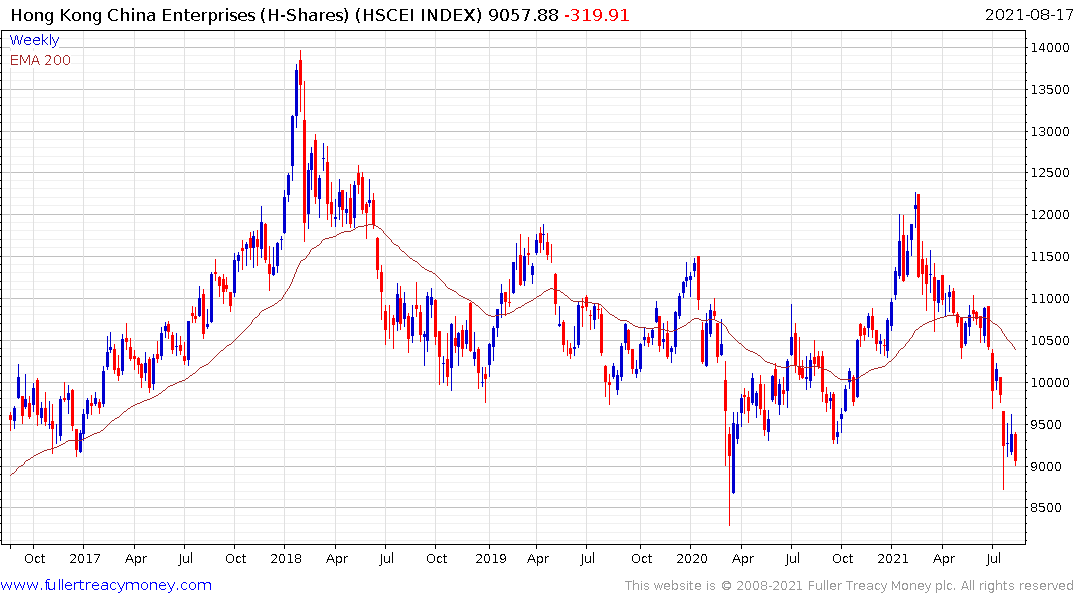 The Hang Seng China Enterprises (H-Share) Index is falling back towards the lower side of a more than decade-long range. 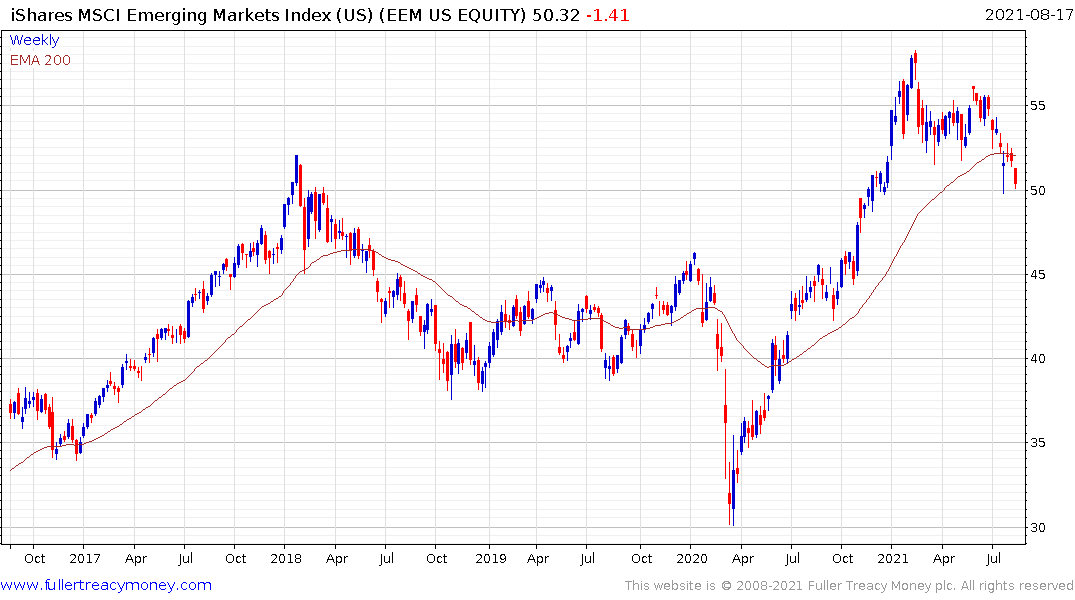 Chinese companies represent a third of the MSCI Emerging Markets ETF so it is feeling the strain from this pattern of underperformance. 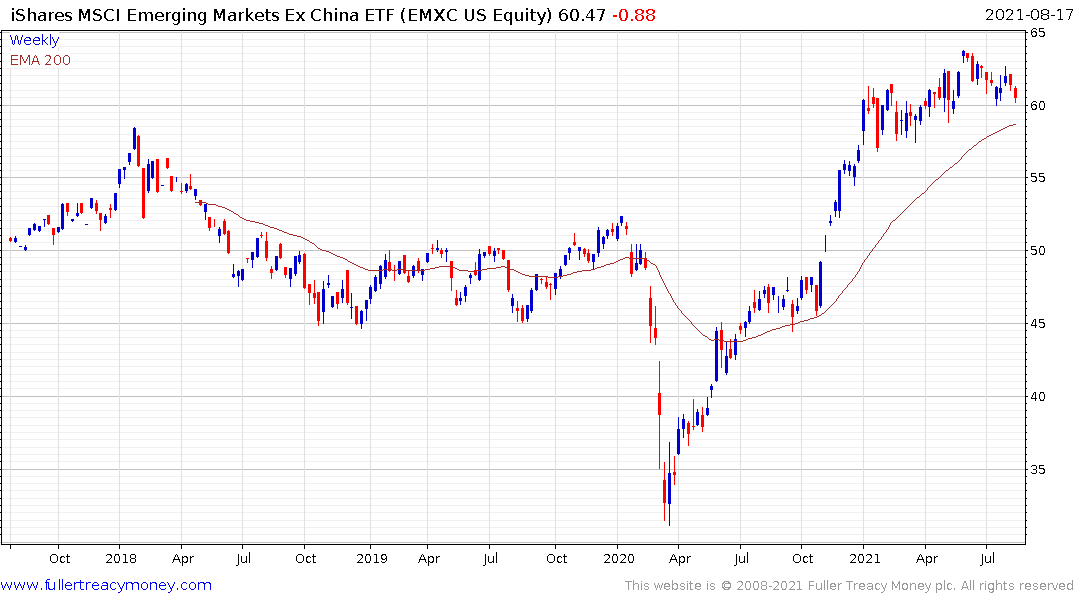 Meanwhile the iShares Emerging Markets Ex-China ETF has lost some momentum of late suggesting China’s weakness will not be isolated to Chinese stocks.