Behind the Brexit Chaos: A Faulty U.K. Negotiating Strategy
Comment of the Day

Behind the Brexit Chaos: A Faulty U.K. Negotiating Strategy by Eoin Treacy

The U.K. also anticipated it could appeal to traditional allies in Northern Europe, like Sweden, Denmark and the Netherlands. Inside the EU they had together championed the values of free markets and open trade. But once the U.K. left, a different dynamic took over.

One issue the U.K. missed was that some of these governments were also faced with euroskepticism and political concerns about EU overreach.

In the turmoil immediately after the 2016 Brexit referendum, Mark Rutte, prime minister of the Netherlands, one of the most like-minded countries, said the U.K. had just “collapsed: politically, monetarily, constitutionally and economically.”

Mr. Rutte, facing the political fight of his life against the right-wing populism of Geert Wilders, had a fundamental political interest in ensuring that Brexit turned out to be an anti-model for how to handle angst about Brussels. The Dutch leader echoed that point on Thursday.

“If anyone in the Netherlands thinks Nexit is a good idea, look at England and see the huge damage it’s done,” he said.

The U.K. also missed that it would come to be seen as a rival. Some Northern European countries have many cutting-edge small exporters who worried that an U.K. outside the EU would undercut them in international markets and in the EU if Britain retained easy access to the bloc’s markets.

Mrs. May’s so-called Chequers proposal in July 2018, which aimed at keeping the U.K. in the EU’s single market for goods but able to sign free-trade agreements with the U.S. and others, was viewed on the continent as a blueprint for the U.K. becoming an EU offshore-manufacturing assembly platform.

“It’s always going to be a relationship now of tension and not just partnership, because our interests are diverging from theirs and we are seeking to derive deliberate advantage from having left,” Mr. Rogers said. “We can’t expect them not to react.”

Lord Palmerston’s “England has no eternal friends, England has no perpetual enemies, England has only eternal and perpetual interests” is as true today as ever but it does not just apply to England. The EU has displayed a better understanding of that maxim than the UK has over the last few years. If you are setting up outside the club then you can’t logically expect help from the people you are now intending to compete against. Respect, yes, but assistance, no.

The EU is correct to fear the UK will become an offshore-manufacturing assembly platform since that is one of the only possible ways in which the UK will be able to compete with the EU in future. It is not at all apparent that the May administration has any taste for that vision of the UK.

I have seen more than a few highly charged and emotional pieces blaming Ireland for the failure of the UK to get a better deal from the EU and for insisting on a backstop agreement. (Here, for example). That rather misses the point. There is no country has more to lose from the UK leaving the EU than Ireland, and the Irish government’s first responsibility is to its citizens. It desperately wants to avoid a border not because there is any real threat of a return to sectarian violence but because it would create a massive headache for Dublin; see capital flow North on relative discount trading, ensure Irish exporters to the UK become grossly uncompetitive and cripple the agriculture sector which is a major swing constituency.

The decision to play for maximum benefit from Brexit is either gong to look inspired or be a disaster. Meanwhile the stock market is trending lower and while somewhat oversold, has type-3 top formation characteristics.

For the UK, the realisation that the deal on offer is nowhere near what had been envisaged before the negotiations began is a major point of contention in Parliament. That is behind the ongoing debate about whether to accept to deal of go ahead with a rerun of the referendum. Tony Blair most notably making the argument for that in the BBC today. One of the most inventive scenarios I’ve seen was in this Bloomberg article.

A two-stage vote, where people were first asked whether they wanted to remain or leave, and then if they preferred May’s deal or a no-deal Brexit, could see her blueprint win as the compromise between two extremes. 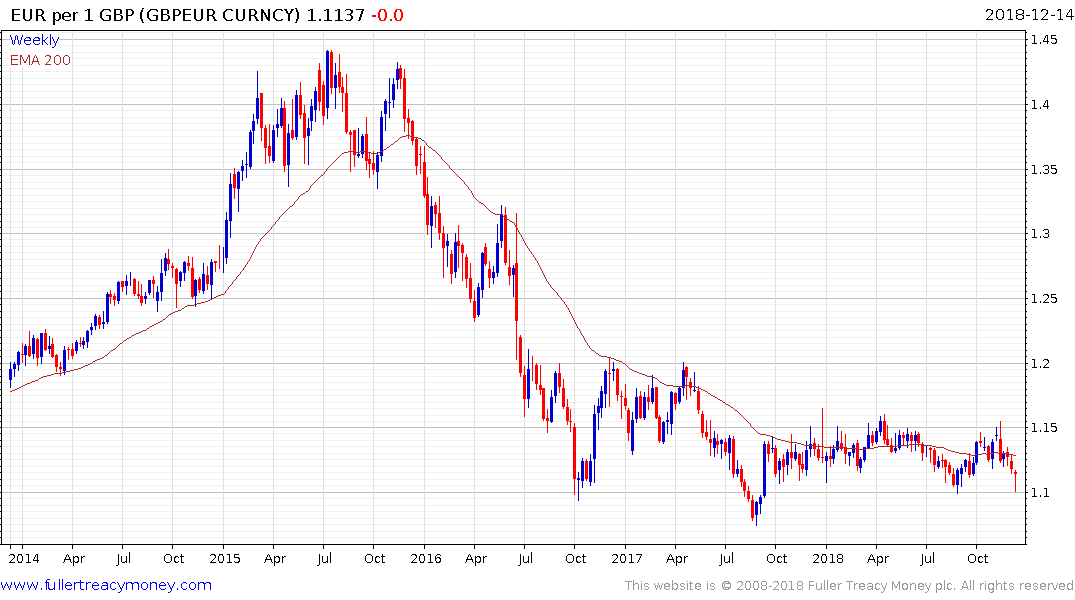