Portnoy and his ilk have been part of one of the greatest rallies in history, adopting as a mantra the online slogan of “stocks only go up!” Market watchers are being forced to ask to what degree retail interest has become a self-fulfilling prophecy in many parts of the market -- and what dangers it poses for its sustainability. Thursday’s rout, the deepest in three months, offered a reminder that stocks do, in fact, fall, though equities rebounded in trading Friday.

Millennials and Gen Zs, the target audience of Barstool content, have long been under-invested in the stock market, said Julian Emanuel, chief equity and derivatives strategist at BTIG LLC.

That’s changing. Stuck at home with plenty of free time, government stimulus checks, no sports to bet on and, for better or worse, a figure like Portnoy turning investing into entertainment, more and more young people are wading in for the first time.

In the last 24 hours two different subscribers have drawn my attention to the role of day traders in supporting stock prices over the last few months. It’s an important phenomenon but it is not new. Investment heavy weights raising cash and warning about excess is a late stage phenomenon. The masses listening instead to proclamations “stocks only go up” is a signal of even later stage activity. 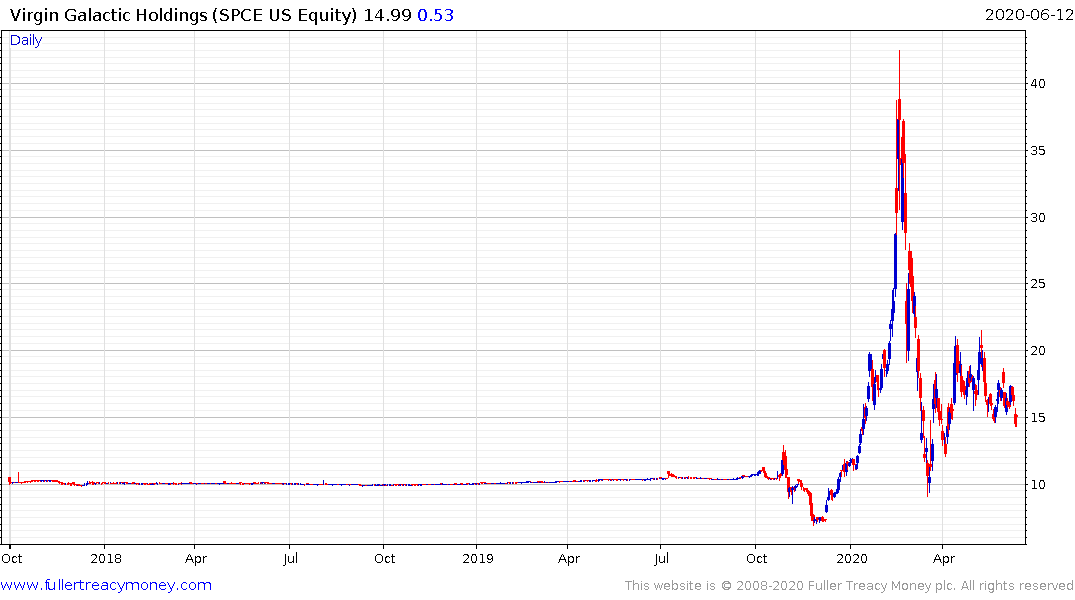 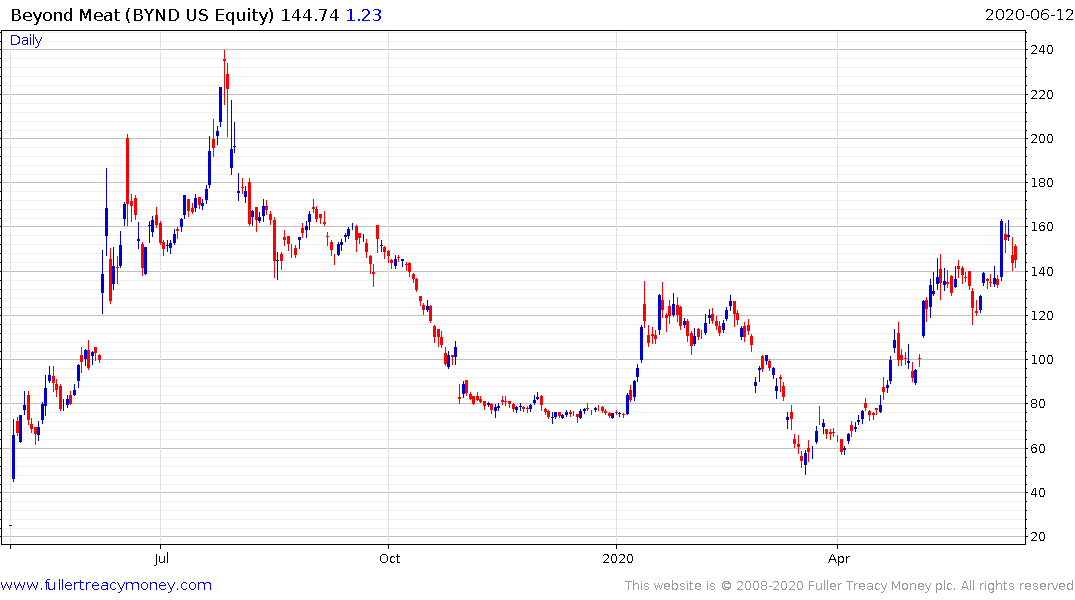 The media has been on fire with news of the surge in Nikola stocks which jumped from $10 to $90 since March. That is a significant acceleration in the speculative mania that allowed Virgin Galactic to jump from $10 to $40 between October and February. That advance was similar to the move Beyond Meat put in after its IPO in early 2019.

This is a rerun of the market phenomenon we saw in the late 1990s but with modern day trappings. Back then it was all about buying IPOs and investors turned up from all over the world to join the party. The strength of the Dollar and innovation of the economy made the USA, the primary destination for flows. Tech companies were listing with little prospect of making profits but investors only wanted to think about the future and everyone was making money…until they weren’t.

Private equity firms have been raising cash for more than two years. Huge companies that would normally have IPOed years ago avoided listing because of low interest rates and abundant credit. The failed IPOs of Uber and Lyft and the rush they made to list was also a late cycle signal. Peter Thiel’s big data firm, Palantir, appears to now be readying for an imminent IPO.  Meanwhile, large private equity firms instructed partner firms to raise cash and cut costs in February and corporate provisioning for losses is at a peak with $1 trillion in new debt issued to date. 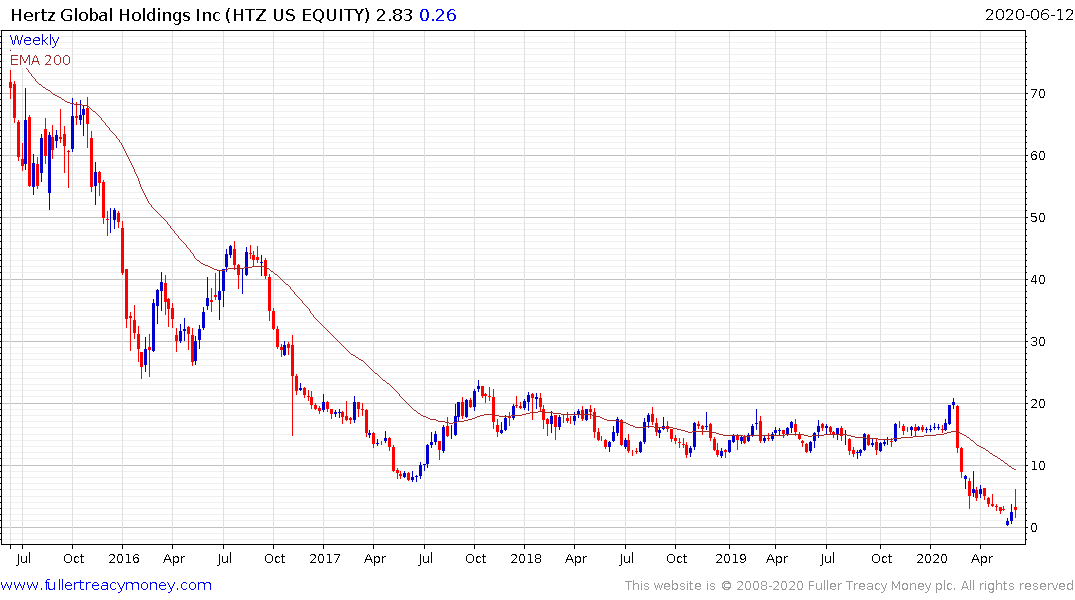 The fact that a near bankrupt company list Hertz can sell $1 billion of new stock is an additional sign of the logical inconsistency of the market we are currently presented with. 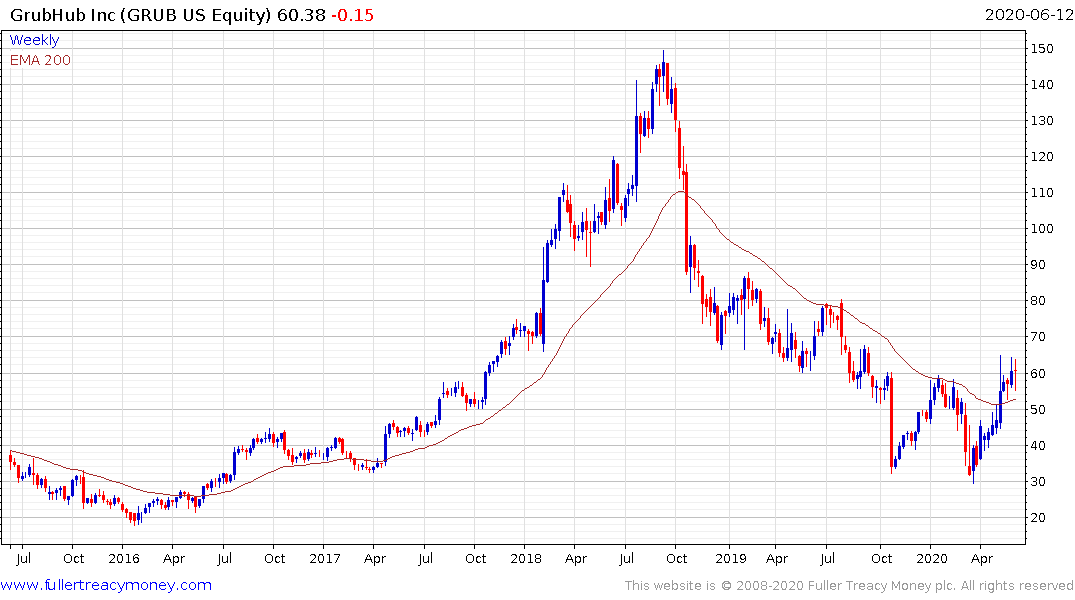 GrubHub, is the only food delivery company to have ever turned a profit. It was just acquired by a loss- making company in an all stock offer. That strikes me as remarkably bad value that only occurs in a mania. Let’s not forget, one of the defining characteristics of a mania is the acceptance of contradictions like “stocks only go up”. 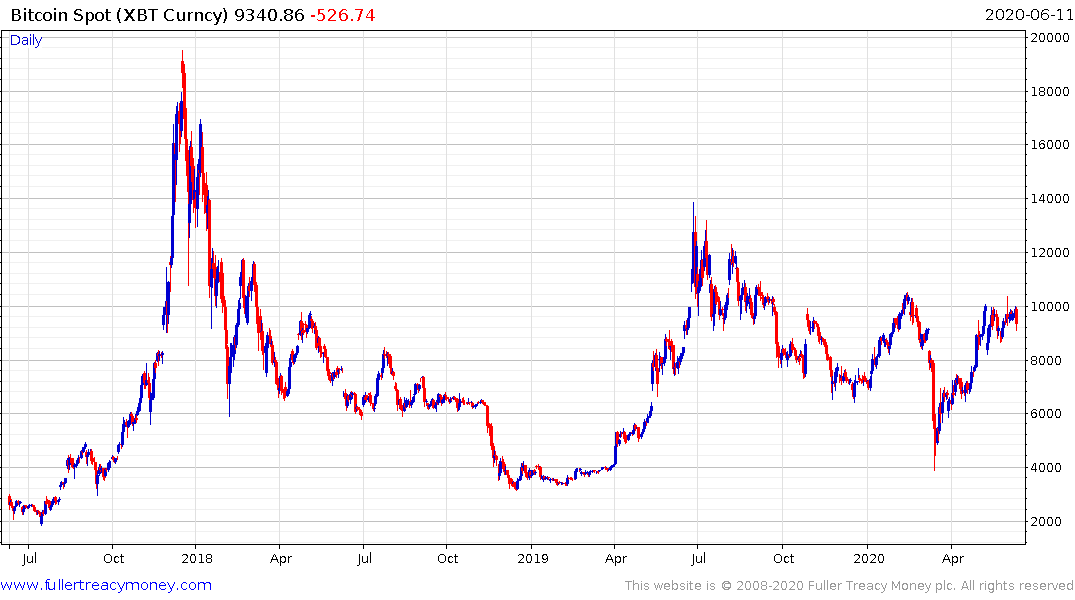 I believe it is also worth highlighting that retail speculators have also been extremely active in the cryptocurrency markets for the last few years. That sector has been quiet while attention has been focused on day trading stocks.

In April 2019 there were stories circulating about how mom and pop traders had sold following the initial pullback, when the uptrend began to lose consistency. After selling what turned into the best performers in the subsequent year, the logical conclusion is to sit through pullbacks and increase positions on weakness. That is exactly what has happened with retail investors who now believe buy and hold is the only strategy. Meanwhile stories about the rise of day traders have been gaining attention since at least February.

Samsung came out with a “World in 2069” report last September. Softbank has been talking up its vision for creating a 300-year company with its Vision Fund. Never mind, that many of the investments it made were at peak valuations.

The important point is most of these late cycle phenomena pre-date the coronavirus. The UK economy just contracted by 20%. The USA, under an ideal scenario, will recover its loss in two years. The quantity of money printed just to sustain current levels of activity is mindboggling. We have all been conditioned to expect the liquidity gravy train to sustain prices indefinitely. It’s a tempting conclusion which has worked for 12 years.

However, there is now a countervailing argument. Civil unrest. Inflating asset prices represent big red flags to the disenfranchised masses. This is the newest trend that needs to be closely monitored.

We visited Petra in Jordan during our honeymoon and I was intrigued to learn of how the iconoclasts destroyed much of the imagery at the site. ISIS’s destruction of Palmyra in Syria or the Taliban’s destruction of the standing Buddhas in Afghanistan are more recent examples of upstart movements destroying the effigies of a defunct cultural legacy. The modern protest movement destroying anything that relates to race or the history of slavery is a similar phenomenon that speaks to a deep emotional need to repeat the rallying cry of all populists. “What about me?” It is also worth considering it is as much of generation war as it is about race, inequality opportunity and entitlement.

The number of homeless people on the streets of Los Angeles has ballooned over the last couple of months and that is despite the fact that many public spaces and recreation centres have been devoted to shelters. The fact that many people returning to Las Vegas are not wearing masks, or that many of the protestors on the streets are ignoring social distancing is part of the wider “you only live once” (YOLO) zeitgeist.

I know I personally have occasionally ruminated on the benefits of getting the virus while medical facilities are available rather that running the risk of not being able to get care when they are over-burdened. I suspect many people are in the same boat, or no longer care. 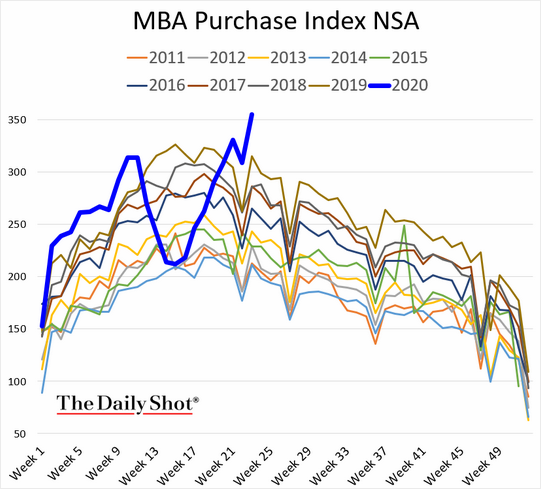 Mortgage applications are at decade highs and the trajectory of this chart is practically identical to the sales Mrs. Treacy is getting on Amazon where this month is up 26% on June 2019. My fear is we are in the eye of the storm. Devil-may-care risk tolerance is surging. Maybe it will be enough to sustain stock prices and maybe vaccines will be delivered in the next few months. This is an election year, so there is a tendency to provide stimulus. However, the Democrats are talking about raising taxes. 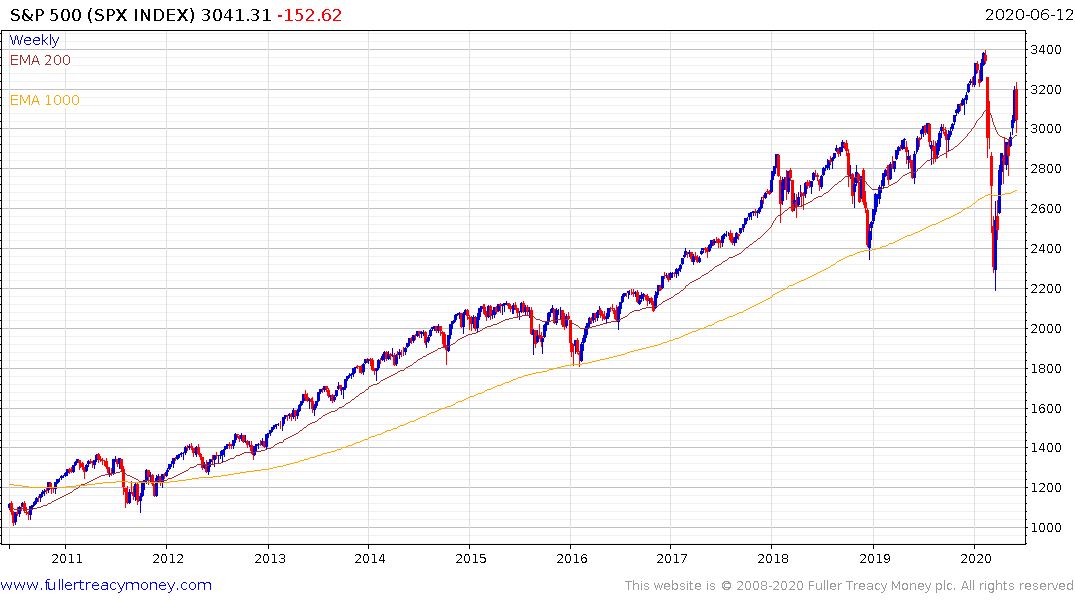 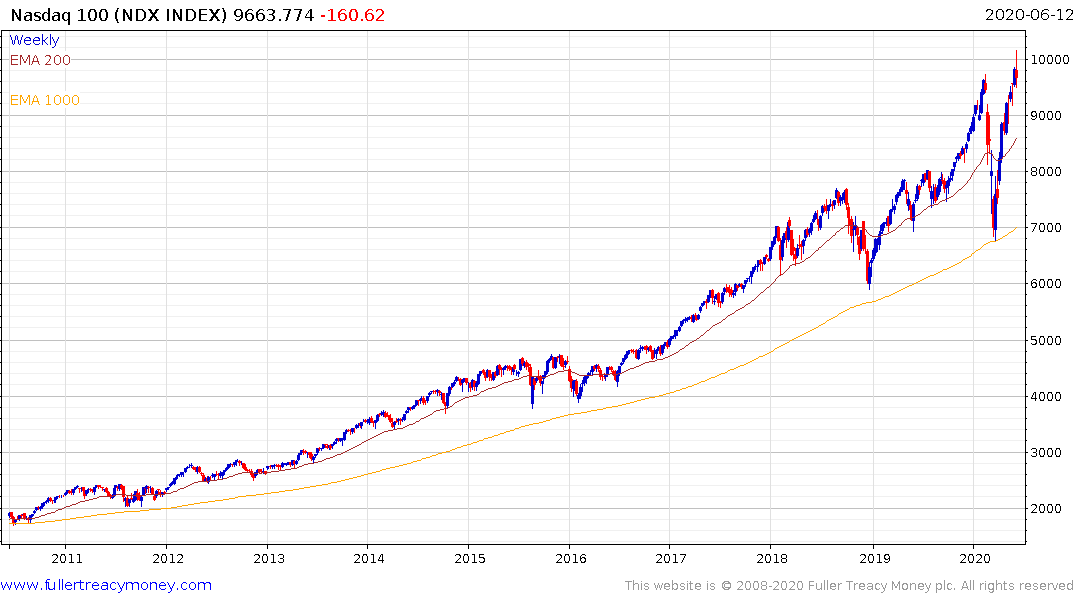 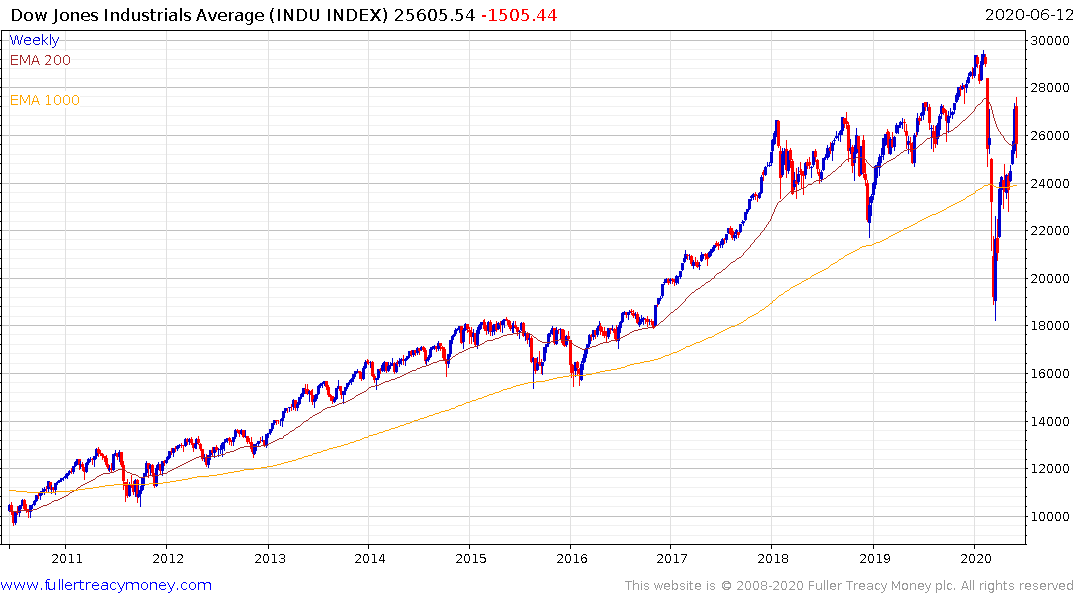 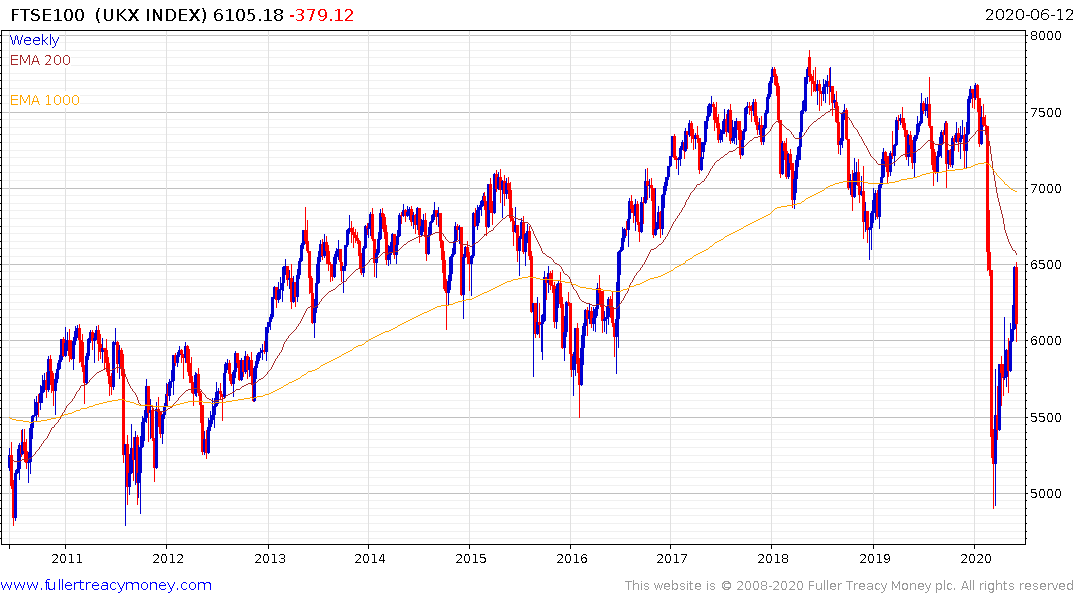 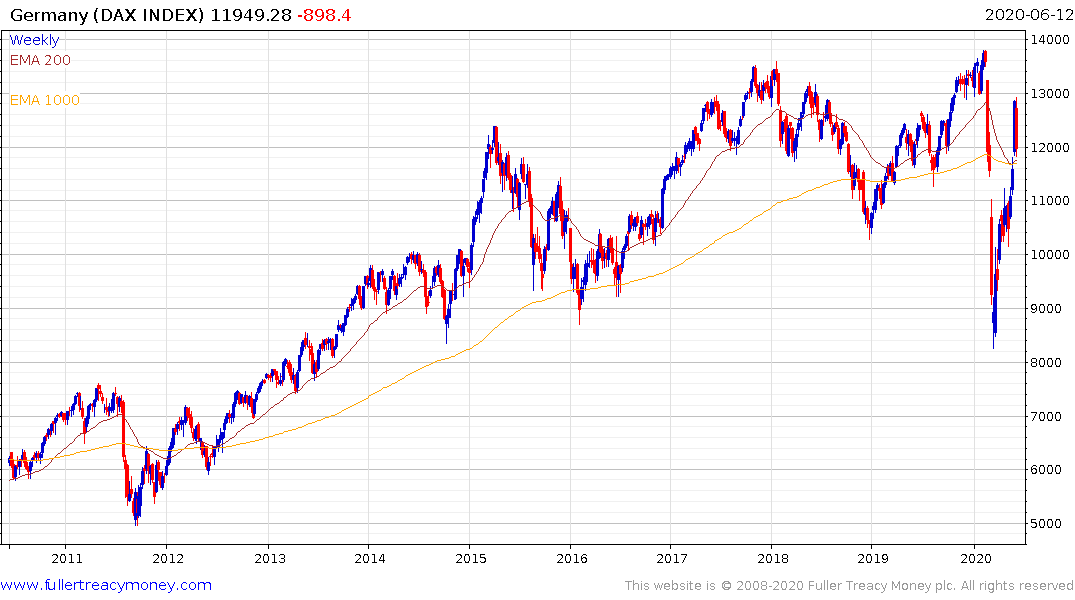 The S&P500 is hanging on to the 3,000 level. The Dow Jones Industrials is at 25,000, The Nasdaq-100 is at 9,500, The FTSE-100 is at 6000 and the DAX is at 12000. Many of these indices are testing their respective trend means. Failures at these levels would signal a deeper corrective phase, which in some cases could test the lows. The bullish perspective would be that these are largely equal-sized reactions compared to those seen since March. Therefore, we are at a major decision point.