The biggest U.S. banks, including Bank of America Corp., JPMorgan Chase & Co. and Goldman Sachs Group Inc., rallied to the highest in more than a month on Friday, after the Federal Reserve cleared them to boost payouts.

“Ask and ye shall receive” was the common theme with the results of this year’s Capital Analysis and Review, known as CCAR, Evercore ISI’s Glenn Schorr wrote in a note. Most of the banks he covers beat Evercore ISI’s, and consensus, expectations for total dollars of capital return, and all the banks beat in terms of payout ratios.

The “enormous” capital plans announced by JPMorgan, BofA, Citigroup Inc. and Wells Fargo & Co., amounting to a combined total of over $130 billion, show that “the industry is extremely well capitalized,” RBC’s Gerard Cassidy wrote in a note.

Even so, Morgan Stanley’s Betsy Graseck cautioned that the party won’t last. This year’s results were “the last hurrah,” she wrote in a note, with payouts probably declining 21% in 2020, as “capital is now close to optimized.” Her advice? “Enjoy it while you can.”

Higher dividends are what investors have been waiting for in the banking sector so this is good news. The biggest question raises in the last paragraph above it where the revenue growth is going to come from to sustain payouts? 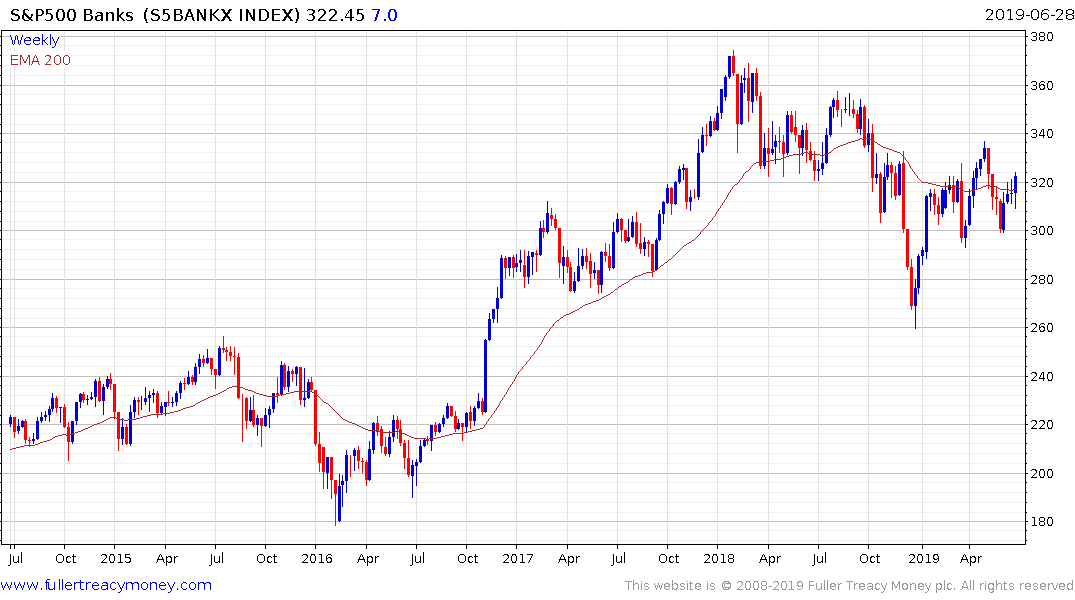 Interest rates are low and getting lower, the yield curve is very flat so lending margins are low and economic growth has been slowing. Banks need a pick-up in the global and domestic economies as much as anyone to flatter earnings.

The bigger picture is the banking sector is unlikely to be the problem in a future recession. They just do not have the leverage they had a decade ago. The cost of regulation and restrictions on risk-taking have ensured they have a larger moat but do not have the same growth potential.

In this cycle, leverage is concentrated in the nonbank lenders such as real estate companies and private equity investors. It also resides on the balance sheets of corporations who have binged on debt. If there is a risk for the banking sector it is in the intermingling of capital and exposure with these kinds of businesses rather than the subprime mortgages. The blowup of Neil Woodford’s fund and the questions being raised about H2O because of the exposure they have to illiquid assets is a flavour of what we can expect from the next crisis.

While still an evolving issue the clear ambition of the cryptocurrency sector is to target the fee structure of the financial sector. Banks often have layered fees that are based on the provision of trust-based services. Everything from deposits, sending remittances and wire transfers and the fee derived from providing accounts, cheques, business services etc. are being targeted by upstart companies substituting blockchain for in the banking sector. The introduction of Facebook to the sector with its new stablecoin (pegged) solution is a hybrid solution that will give payments companies like Visa and PayPal the ability to offer banking and transaction services. That’s a particular challenge for the banking sector, long term.