A collaboration of the SEBA Bank AG and the Tezos Foundation to test the integration of a CBDC for interbank settlements was one of 8 successful projects chosen by the Banque De France announced on the 20th of July. Many people had speculated whether Tezos was involved with at least one of the eight projects.

China is not the only country actively exploring the creation of a digital currency. The fact that the French central bank is also exploring a digital currency outside of its subservience to the ECB might on first impression seem a little odd. However, it is does highlight the fact many central banks see the evolution of crypto tokens as a dual currency overlay within the limits of what the view as an evolution of conventional money control measures. 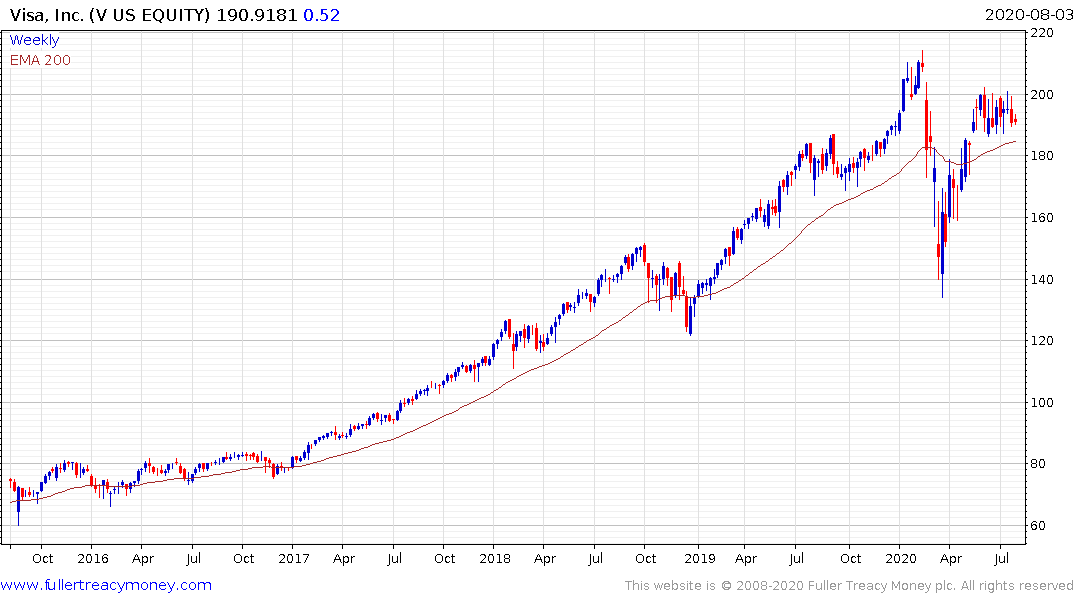 Visa is also still actively engaged in exploring the evolution of stable coins (which are pegged to a conventional currency. This article may be of interest. Here is a section:

Similar to other digital wallets, digital currency wallets are looking to use the full range of Visa’s capabilities, including Visa Direct, which makes it faster and easier for consumers to convert digital currency and push those funds to their Visa credentials in real-time. Much of this work is happening through Visa’s FastTrack program, which helps fintechs, including those in the digital currency space, integrate quickly with Visa’s global network. 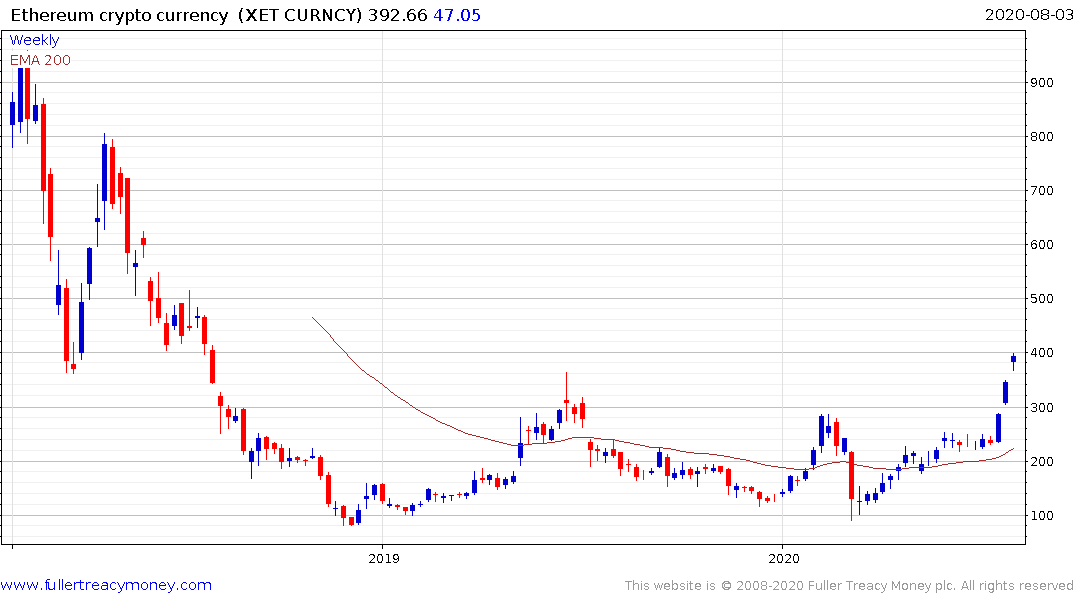 Perhaps the biggest piece of news is that Visa is building its solution on Ethereum’s chassis. That is quite likely the catalyst for the token’s base formation completion last week. 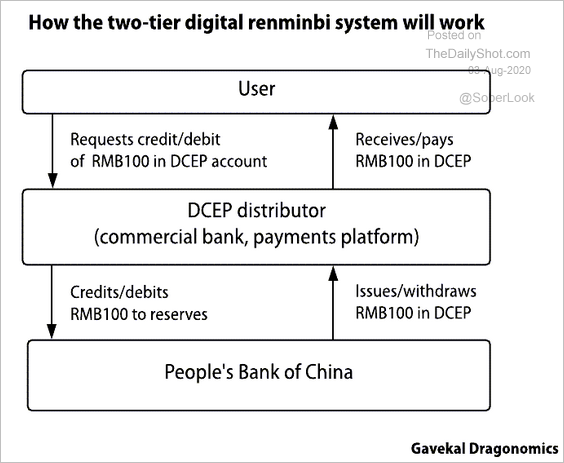 This graphic from GaveKal covering the structure of China’s digital renminbi may also be of interest. The creation of a two-tier system where the commercial bank/payments platform sits in the middle is not all that different from the system that exists today.

The difference is when the digital token is in common use the capacity to have full control over money supply and full transparency on where it goes is greatly enhanced. From a central bank’s perspective, it will then have unfettered direct potential to inflate or deflate money supply.

The big picture from China’s perspective is that this two-tier system can just as easily be used to circumvent the SWIFT system of international transfers which is heavily Dollar oriented. Setting up a digital currency is therefore a subversive way of furthering the ambition of truly internationalising the Renminbi with a view to it eventually becoming the reserve currency

The section from a recent blog post on EvergreenGaveKal may also be of interest. Here is a section:

This last explanation brings me back to the thesis developed in the book that Charles and I wrote a little over a year ago: that China is now actively attempting to dedollarize pan-emerging-markets trade. This matters enormously, because should China succeed, emerging markets across Asia, Africa, Central Asia and Eastern Europe will find themselves needing far fewer US dollars. A world in which the US dollar’s share of global trade starts to shrink rapidly— still highly hypothetical—is a world which would rapidly find itself with far too many US dollars floating abroad.

A world with an overflow of US dollars would be a very different world from the one we inhabit. It would be a world in which:

Precious metals would likely go through the roof.
Asia, including China, would outperform meaningfully.
The only thing to own in the US would be the businesses in which the US has a clear comparative advantage. Now, come to think of it, isn’t this precisely what we are seeing today? 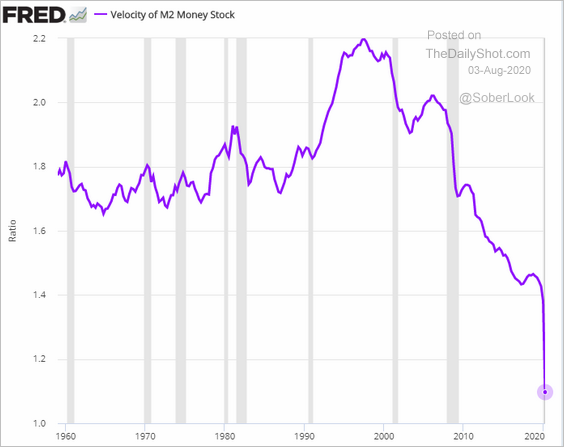 Velocity of money figures were released today and show an historic collapse which was to be expected. The spectacular increase in Money Supply growth is a direct result of that decline. However, the acceleration lower in the velocity of money now poses significant challenges because of the stock market’s additional to liquidity.

The economy is rebounding impressively from the nadir in Q2 and economists have concluded the pace of the advance will moderate in Q4. If the Velocity of Money rebounds, without the Fed removing money supply, we are going to have an inflationary shock.

The reality is that with the massive expansion of fiscal spending in 2017 and its acceleration this year coupled with the even more central bank printing the world is already floating in Dollars.

De-dollarising international trade is a casus belli for the USA, so we can anticipate there will be a much more concerted effort to isolate China. That will accelerate China’s drive to be independent and it has more trade with emerging markets than the USA does.

One way or another this whole argument is going to reduce demand for Dollars, not least from China and from any trading partner it can convince to accept Renminbi over Dollars. The leading candidates for a transition are Russia, Iran and other Middle Eastern countries.

The last time we had a financial repression argument against the Dollar was in the early 2000s. During the following decade emerging markets, commodities and precious metals outperformed. 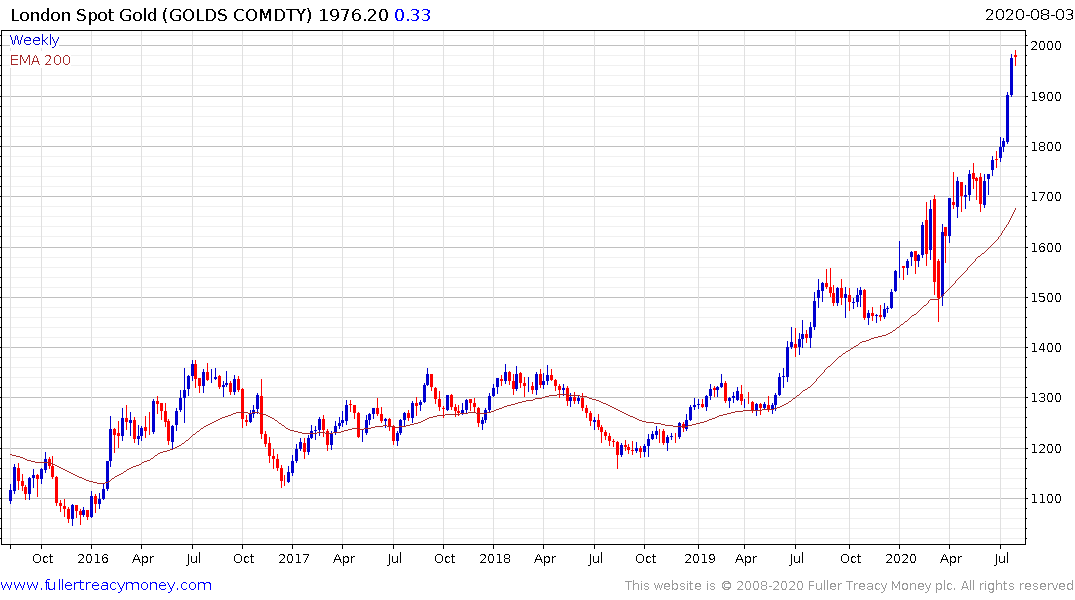 Gold is currently pausing, amid a short-term overbought condition, just below the psychological $2000. 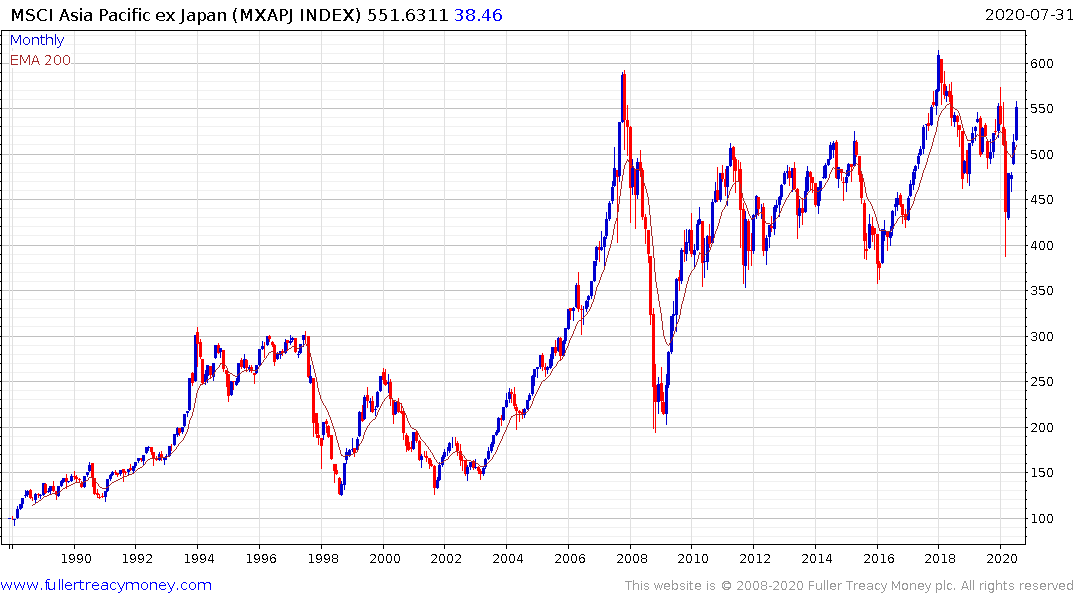 MSCI Asia Ex-Japan has had an extraordinarily volatile chart pattern over the last thirty years with significant peak to trough swings. A sequence of higher major reaction lows is evidence since 2009 but it is anything but a consistent chart pattern. This suggests access via individual Asian markets will remain the preferred strategy for benefitting from nascent recoveries. 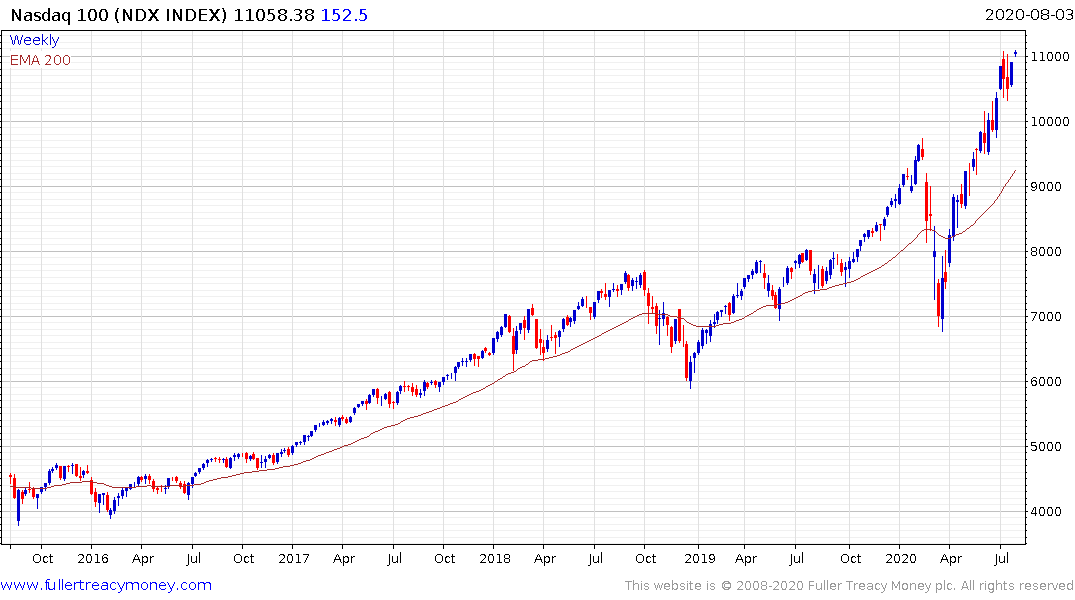 The Nasdaq-100 continues to accelerate higher in an orderly fashion with a series of short-term ranges one above another. A break in the sequence of higher reaction lows would be required to check the advance.