With an equities rally wavering, trade relations between world’s two largest economies deteriorating and U.S. borrowing costs slipping, the commodity often seen as a haven in times of turbulence is encountering troubles of its own. Gold prices are headed for a fourth straight monthly drop, and have seesawed between weekly gains and losses since late April.

Bullion, which hasn’t posted more than three straight daily gains since March, has been stuck in a fits-and-starts pattern as signs of resilient growth and a rising dollar counter concern that the world economy is set to slow. Even increased wagers that the Federal Reserve will ease monetary policy this year haven’t been enough to sustain rallies in bullion, which can benefit from low rates because it doesn’t pay interest.

“Prices are kind of range bound, nobody is making any money, so on the margin, people are just disinterested,’’ said John Laforge, the head of real asset strategy at Wells Fargo Investment Institute, which oversees 1.9 trillion. “You really need something fearful out there, which is the scary part. You really need something that rattles markets for gold to take off.’’

I like to see these kinds of articles because they give us some perspective on what sentiment towards an asset class is like. As you can see from the above passage the broad feeling is this “market has no legs” and “can’t sustain a rally”. That tells us the majority of people are not in the market. 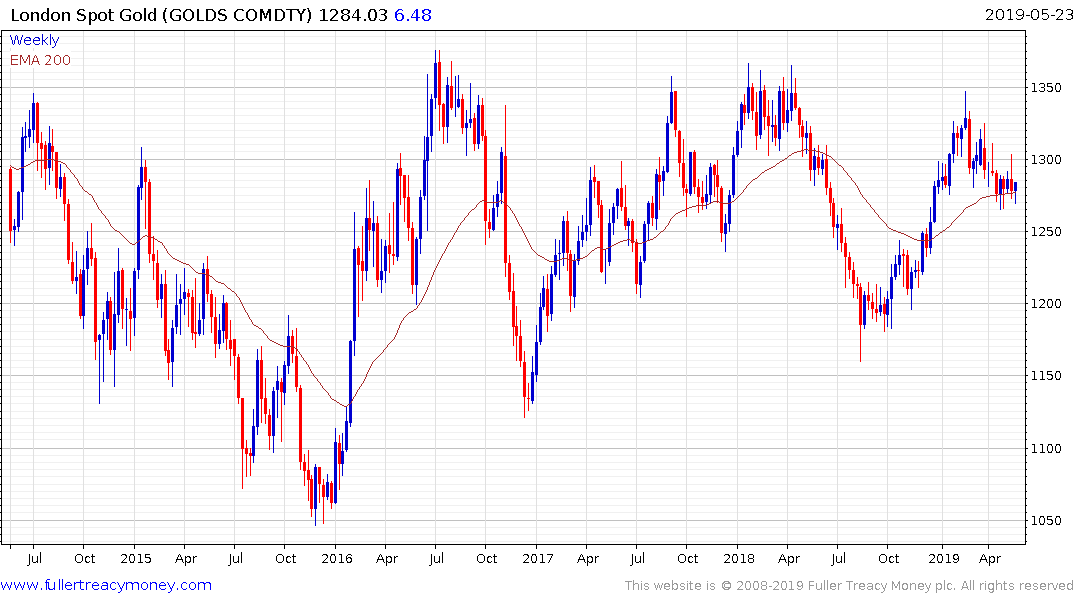 However, we also know that gold has been holding the $1270 region for a month and dips below it have not been sustained on a closing basis. This level also coincides with the trend mean and the price is firming from it again today. The sequence of lower rally highs over the last four months is a barrier, so a sustained move above $1300 will be required to signal more than short-term support but I am encouraged by the recent action and the negative sentiment towards the sector.