Back to Reality; Trade "Truce" Changes Very Little; Overpaying for Growth Still the Biggest Risk
Comment of the Day

It is not so much that we think a trade truce is not an incremental positive, we just don’t think trade has been the primary driver of the slowdown experienced over the past year, as many others seem to believe. Instead, we continue to think our original thesis from over 18 months ago holds true—that the fiscal stimulus in the US would lead to a classic boom/bust cycle that must now complete itself. To recall, the fiscal stimulus was enacted at a time when the US economy was finally reaching escape velocity, we were at full employment and companies were beginning to invest in a healthy manner. The tax cuts then created excesses that would ultimately need to be wrung out.

First is capex. Most people assume capex has slowed this year because of trade uncertainty but our view has always been that capex would disappoint this year because companies overspent last year with their windfall profits and overseas cash repatriation. To prove our point that capex is right on schedule with our view, we note that capex has tracked earnings growth very closely over the past 20 years and appears to be doing that again as our earnings recession call plays out (Exhibit 1). 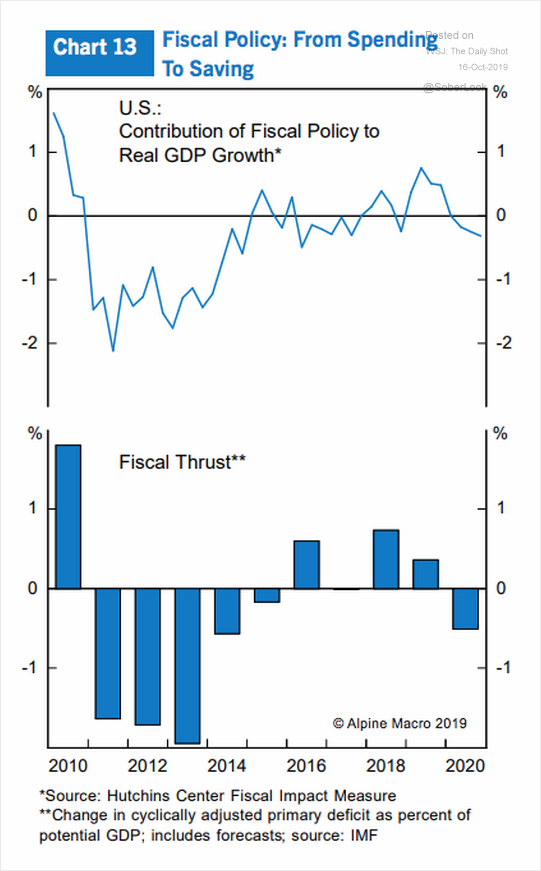 The fiscal impetus from the Trump tax cuts is expiring but the boost from the commitment to increase government spending agreed in the summer remains an important factor. Nevertheless, even that is expected to fade in 2020. That suggests the turn to easier monetary policy at the Fed can’t happen quickly enough.

Disappointing retail sales figures today suggest consumers are still reluctant to spend. The one factor that is getting little attention however is the number of people who have refinanced mortgages in the last few months who now have additional cash at their disposal. The relatively balanced statistics are representative of the range that has been in evidence of Wall Street for much of this year.

The Philadelphia Semiconductors Index eased today from the region of its peak. A resolution to the trade war is probably going to be required to galvanise support for holding new highs.