Autodesk continues to show steady progress in shifting to a subscription model, which has boosted its recurring sales. Subscriber additions continued to be aided by its discounting and other promotions for converting legacy license users to subscription offerings. The company has bundled its products to boost annual recurring revenue (ARR) and average revenue per subscriber (ARPS). While upsell of subscription products to its maintenance subscribers is aiding sales momentum, new cloud products are unlikely to be a growth driver in the near term.

Subscription business models have been growing in popularity among technology companies since Adobe first explored the concept about five years ago. Historically technology has been a highly cyclical business with each new iteration of the product or software resulting in a surge in sales which subsequently led to declines as sales growth tapered off while support costs rose. The cycle would be repeated with each new product offering and this also put a lot of pressure on companies to come up with a new iteration that was measurably better than the last to justify the additional outlay.

Subscriptions remove that pressure and turn lumpy cashflows into predictable income streams that are easy to model and are generally rewarded by higher multiples. Historically, utilities, cable companies and consumer companies have been valued for the reliability of their cashflows and less for their growth potential. In the technology sector, companies have historically been valued for growth rather than the reliability of their cash flows. Subscription models bridge that dichotomy for the technology sector and helps to explain why it these kinds of companies that have been the first to break higher following the February meltdown. 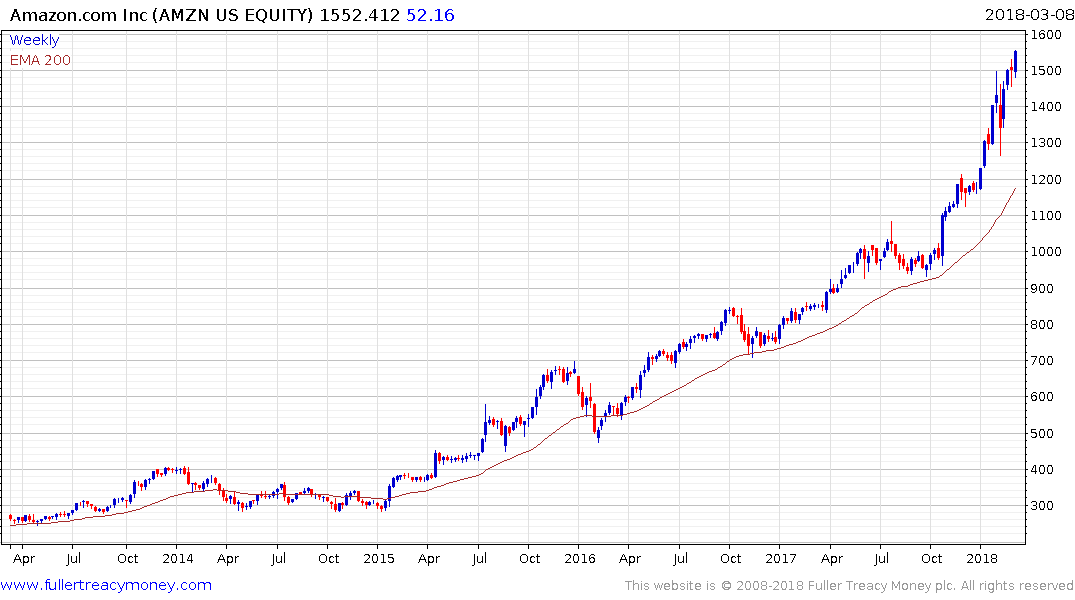 I created this section in the Chart Library for companies outside the traditional arena which have adopted subscription models. Amazon, Microsoft, Netflix, the game producers, Autodesk, Adobe and Cisco among business tech suppliers all fall into that category. These are the kinds of companies that need to be monitored most closely for signs of inconsistency because they have adopted new business models, are among the darlings of the investment community, exhibit clear leadership and relative strength and are often leveraged to the health of the consumer.