“But today’s release highlights that when restrictions are eased, fiscal and monetary policy are supportive, and households and businesses are confident in the outlook -- and in the Covid situation -- the economy will recover,” said Sarah Hunter, chief economist for BIS Oxford Economics.

Australia’s labor market had been tightening rapidly until the delta outbreak. The jobless rate dropped to 4.6% in July, the lowest level since 2008, though that was largely due to a fall in participation as Sydneysiders were unable to hunt for work.

Unemployment is expected to rise in coming months due to the restrictions imposed to combat delta.

On a more positive note, in response to the worsening outbreak, authorities have ramped up vaccinations as they seek to emulate northern hemisphere counterparts in trying to navigate an approach to living with the virus.

The central bank has so far maintained that Australia’s economy will bounce back rapidly from the latest outbreak, as it did in 2020. However, the prolonged duration of lockdowns and the likelihood the virus won’t be suppressed quickly could cast doubt on such an outcome.

There is no reason to expect that Australia’s experience with the coronavirus will be any different from everywhere else. That’s a quick spike, panicky headlines, overzealous lockdowns and a major decline in cases after about two months. Since the most recent spike started in July, it suggests Australia’s peak infection point is rapidly approaching. 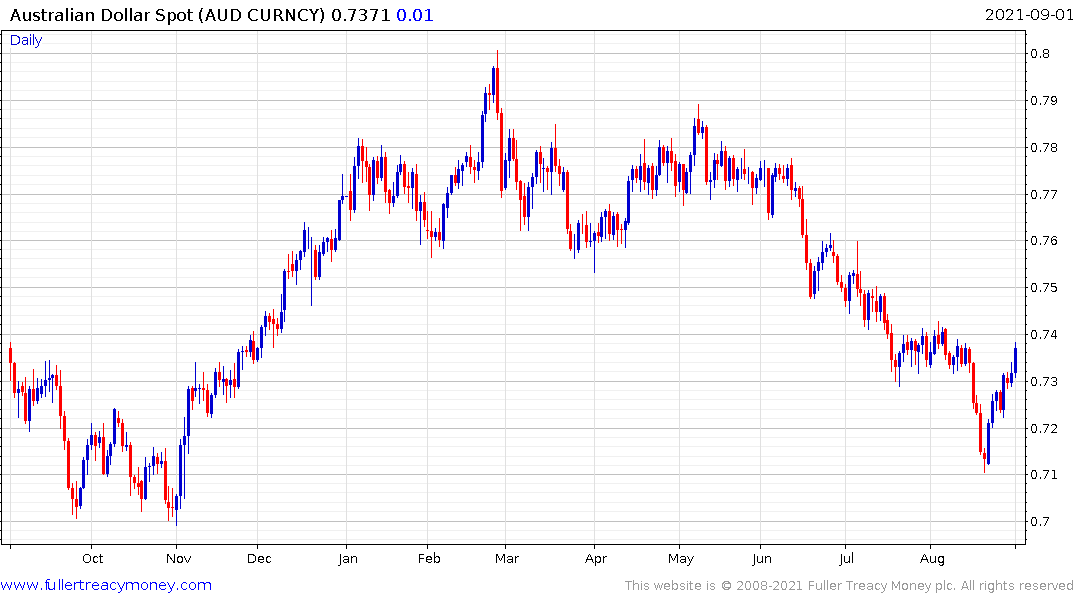 The Australian Dollar continues to rebound and is now testing the six-month sequence of lower rally highs. A sustained move above 74¢ would break the downtrend and confirm a return to demand dominance beyond the short-term. 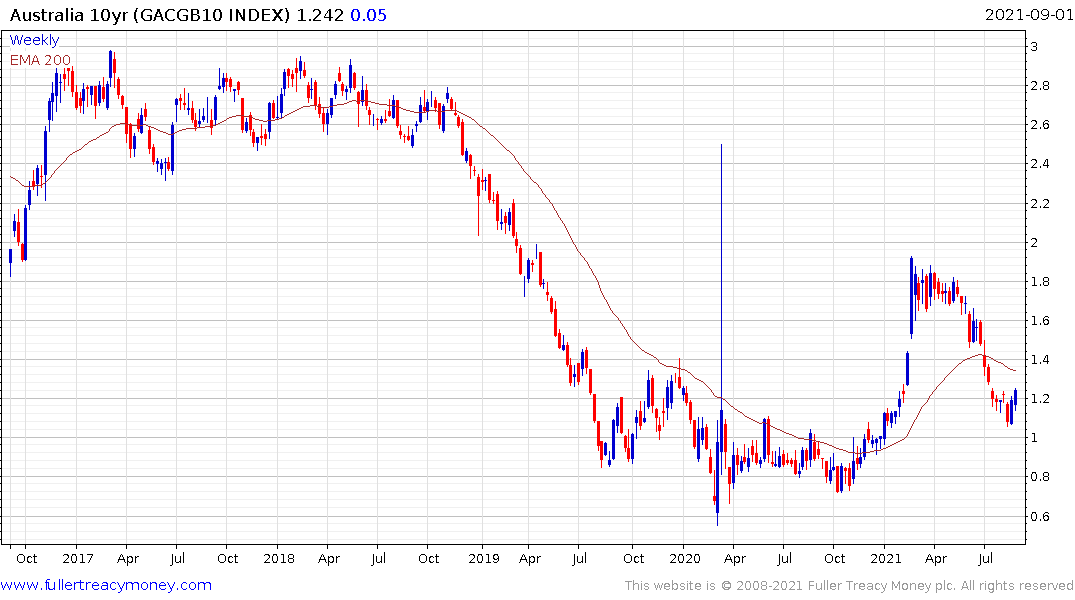 Australian 10-year yields are bouncing from the 1% area to confirm supply dominance at the upper side of the base. That also suggests waning demand for safe havens. 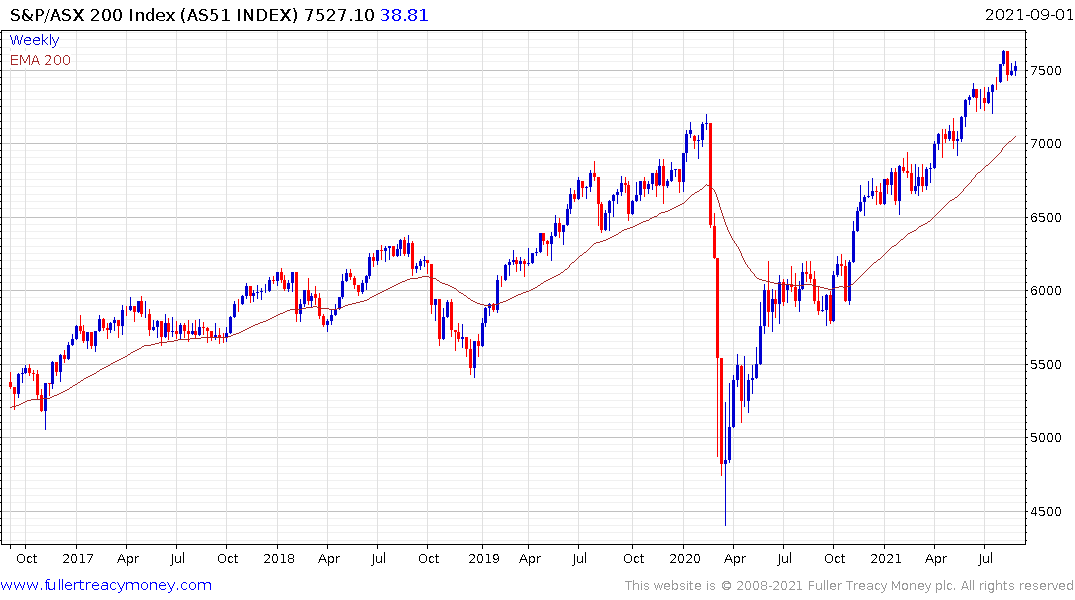 Against that background the stock market remains in a steep but consistent uptrend. 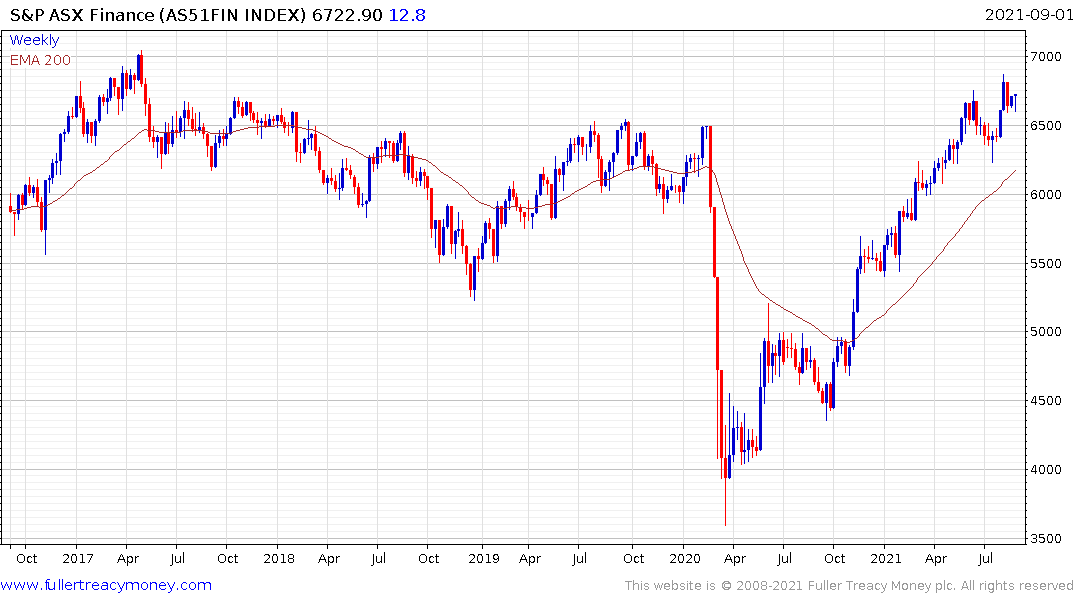 The S&P/ASX Financials Index has almost doubled since the March 2020 low and is now approaching the region of the all-time peaks.