Under rules coming into force on July 1, 2016, the average risk weight on residential mortgage exposures will rise to at least 25 percent from about 16 percent, the Australian Prudential Regulation Authority said in a statement. That will increase the capital requirements of the biggest four banks by about A$12 billion ($8.9 billion), according to Goldman Sachs Group Inc. and Morgan Stanley.

“The timing and magnitude of today’s announcement should come as no surprise,” Goldman Sachs analysts Andrew Lyons and Yu Chuan Leong said in a note to investors. “However, the approximately one-year time frame is shorter than we would have expected.”

The regulator is forcing banks to shore up their capital after a government review last December recommended they should rank among the top 25 percent of lenders globally. The capital increase forms part of the regulators’ attempt to ensure the financial system can cope with any downturn in the housing market, where prices have climbed almost 30 percent in the past three years.

The S&P/ASX 200 Finance Index represents a weighting of 47.85% in the overall index and 43 of the 200 companies.  That’s a large weighting and therefore a potential concern. Measures to ensure the ability of the sector to withstand a downturn in its business are to be welcomed. Meanwhile Financials are likely to benefit from the prospect of additional rate cuts. 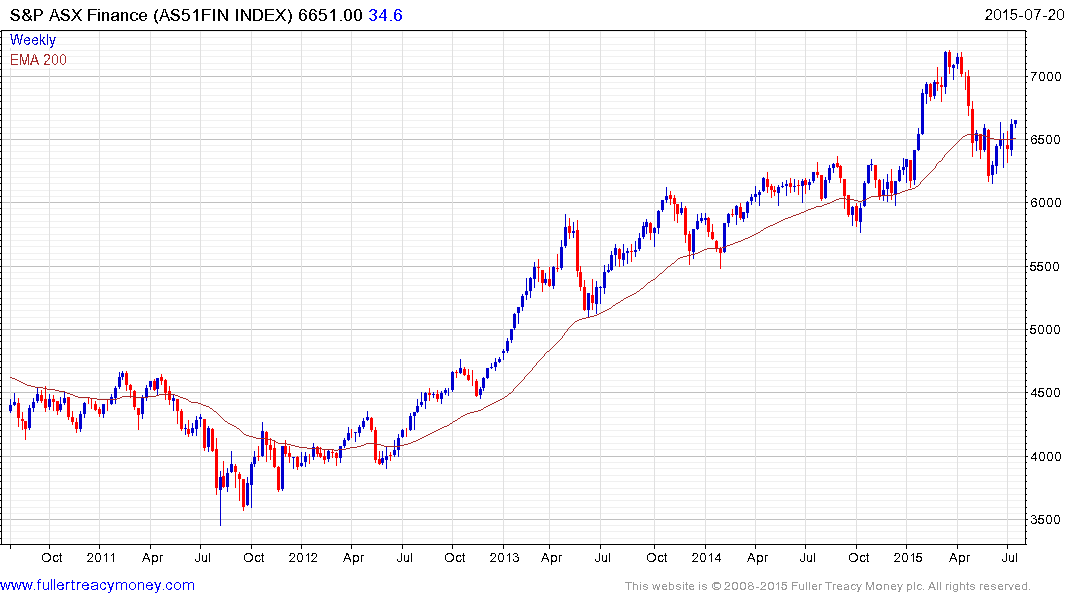 By way of comparison, Financials represent 14% of the Europe STOXX 600. If we aggregate Banks, Life Insurance and Financial Services they represent approximately 20% of the UK’s FTSE-350. The respective sectors occupy approximately 10% of the S&P 500, 35% of the Canada’s TSX and 38% of China’s CSI 300. This suggests that not only is Australia’s financial sector occupying an outsized section of the overall market but that it represents perhaps the largest weighting for any individual market in the world.

The S&P/ASX Financials Index responded favourably to today’s news and rallied to hit a new 10-week high. A sustained move below 6150 would now be required to question potential for continued higher to lateral ranging. 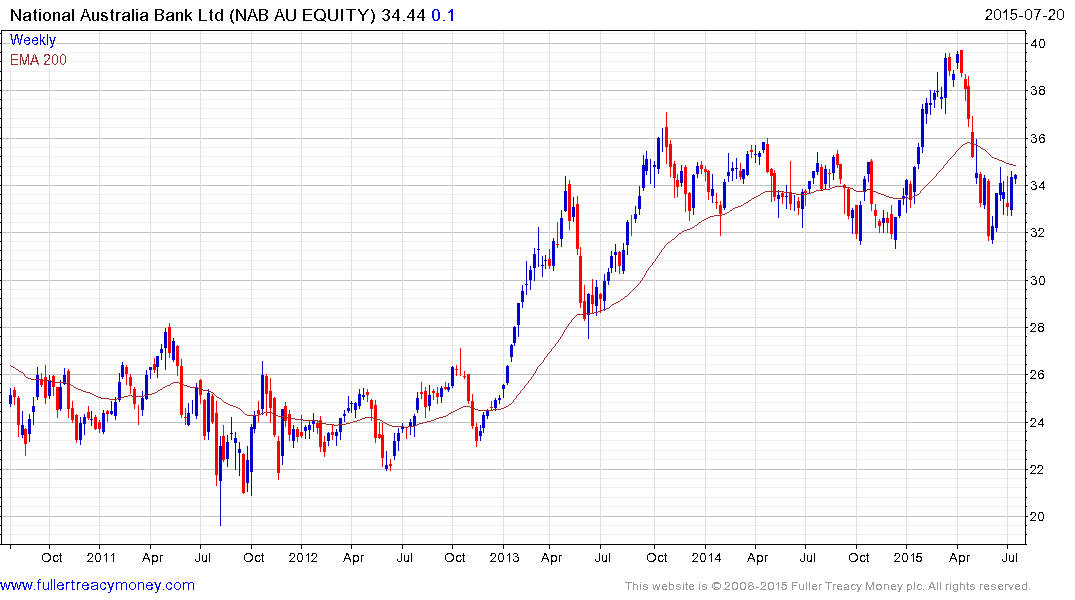 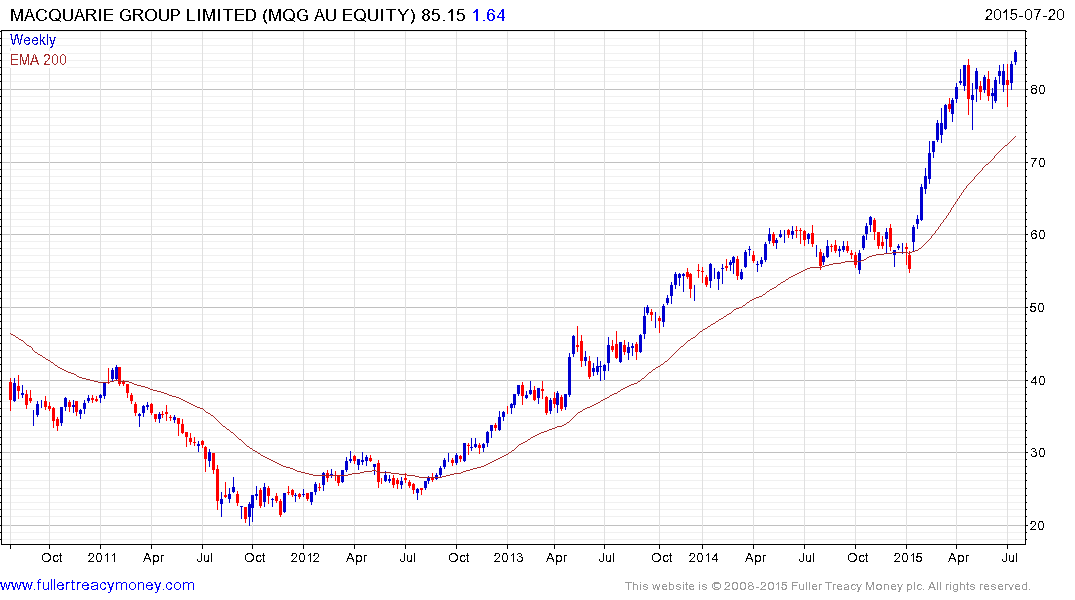 Of these Macquarie has been the clear leader this year and broke out of its most recent range today to reassert its uptrend. A break in the short-term progression of higher reaction lows would suggest a process of mean reversion is unfolding. 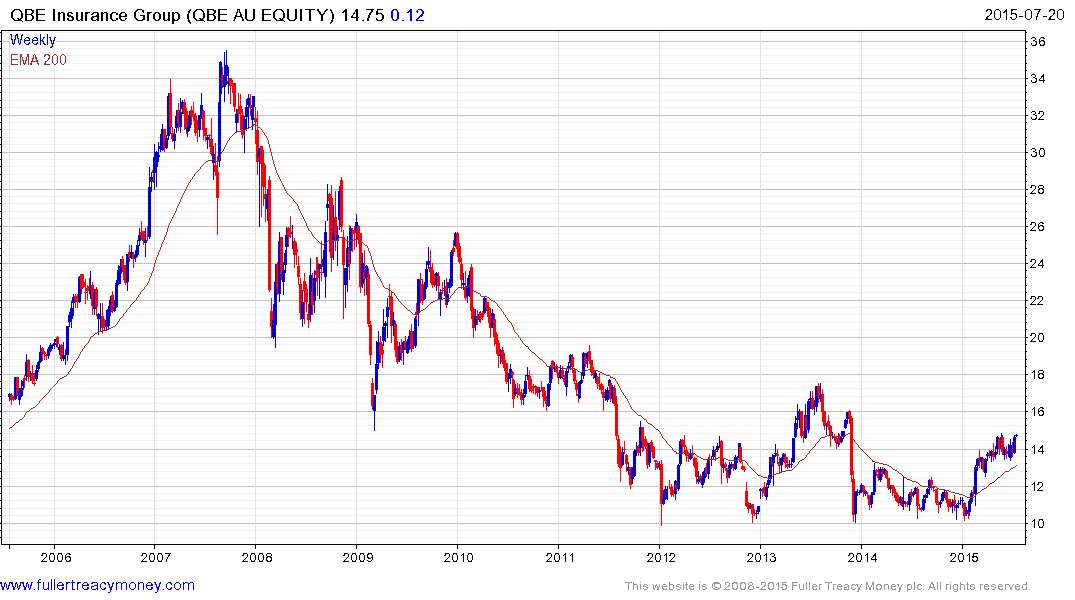 Among Insurance companies QBE (Est P/E 15.59, DY 3.58%) has been consolidating its earlier advance for much of the last few months but may now be in the process of completing an almost four-year base. A sustained move above A$15 would confirm a return to medium-term demand dominance.