BREE's forecast iron ore price for 2015 is just above the current price of 93.30 .IO62-CNI=SI, following a 30 percent price drop this year. However, exports in fiscal 2014/15 were forecast to rise 13 percent to 720.7 million tonnes, BREE said, just below its previous estimate.

Jefferies has cut its earnings estimates for iron ore miners by 5-9 percent below consensus between 2014 and 2016, owing to expectations ore prices will continue to weaken as supply swells.

"This tsunami of supply is still rolling in, and supply growth is likely to be substantial until 2016," it said in a client note.

Commissioning of new coal mines has more than offset lost production from ones that have closed, BREE said, but many producers were unprofitable at prevailing prices.

"This demonstrates the business of mining bulk commodities like coal and iron ore is almost exclusively the domain of big producers, which can benefit from their large economies of scale," said Minelife analyst Gavin Wendt in Sydney.

Over the last week iron-ore prices have stabilised near the 2012 low at $90. A short-term oversold condition is evident so even in a bearish scenario there is scope for a bounce from these levels. However investors are probably going to require some evidence of steadying before concluding a meaningful floor has been reached. 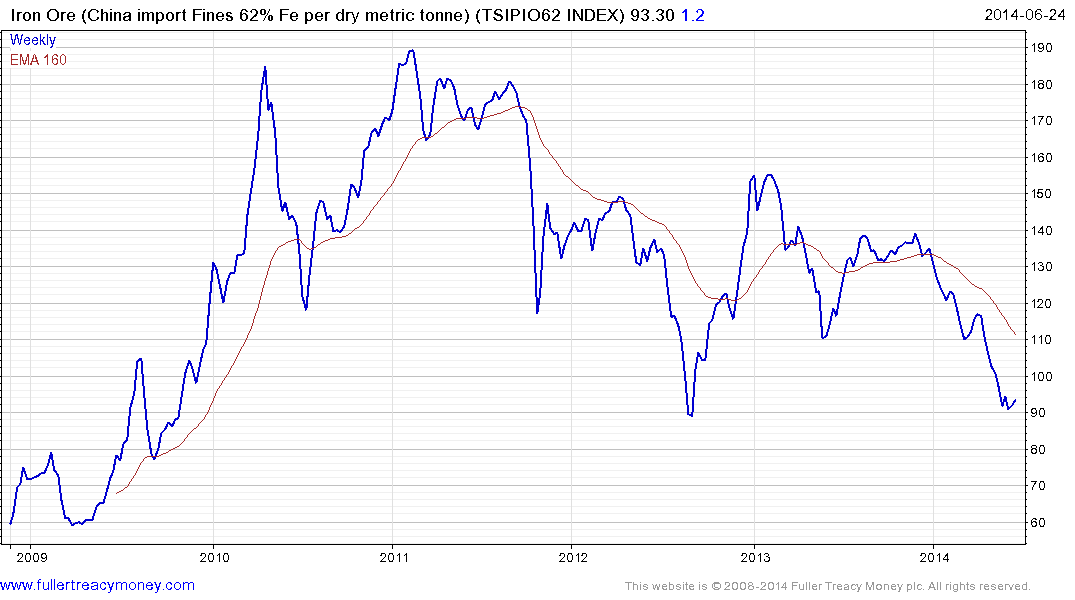 Coking Coal prices have fallen even further and are currently trading below their 2008 lows. A sustained move back above the 200-day MA would be required to begin to suggest more than a short-term low has been reached. 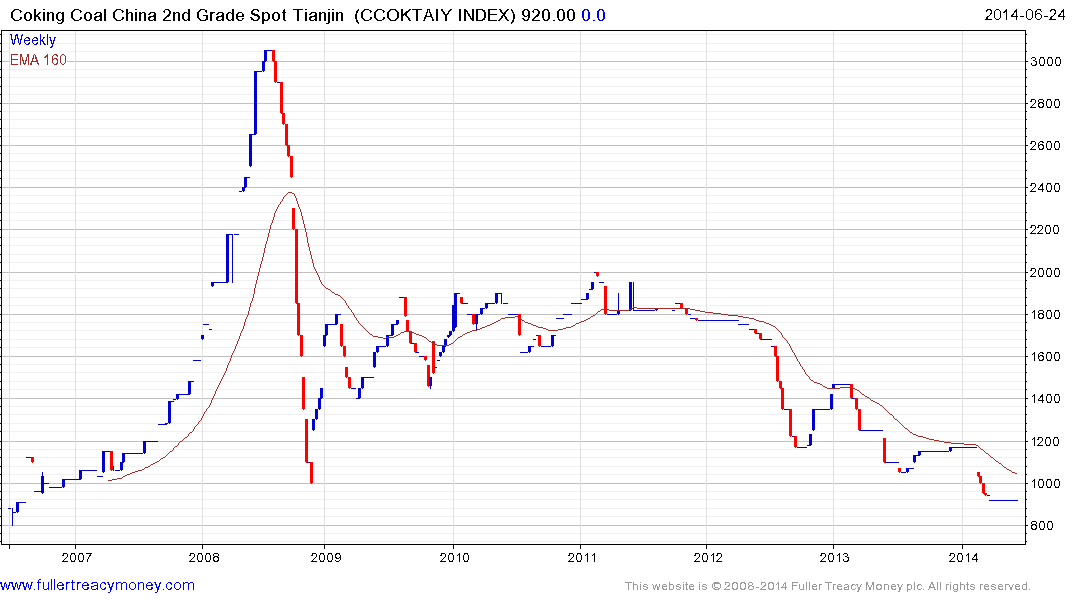 New mines are generally planned when prices are reasonably firm because high prices are needed to justify the expense. When production begins, it needs to continue regardless of what the price of the commodity is, in order to pay down the debt load. This generally contributes to supply increasing even in a declining market environment which is exactly what has happened with a number of major Australian miners over the last year. Both iron-ore and coking coal volumes have been ramped up into a falling market. This scenario puts a great deal of pressure on smaller, higher cost producers and a number of bankruptcies have already occurred in the coal sector. We can probably expect even greater rationalisation and not least in China where a number of producers rely on high prices for sustainability.

I’ve recreated the iron-ore, coal and steel sections from my Favourites in the Chart Library. This section can now be found on the main dropdown menu. 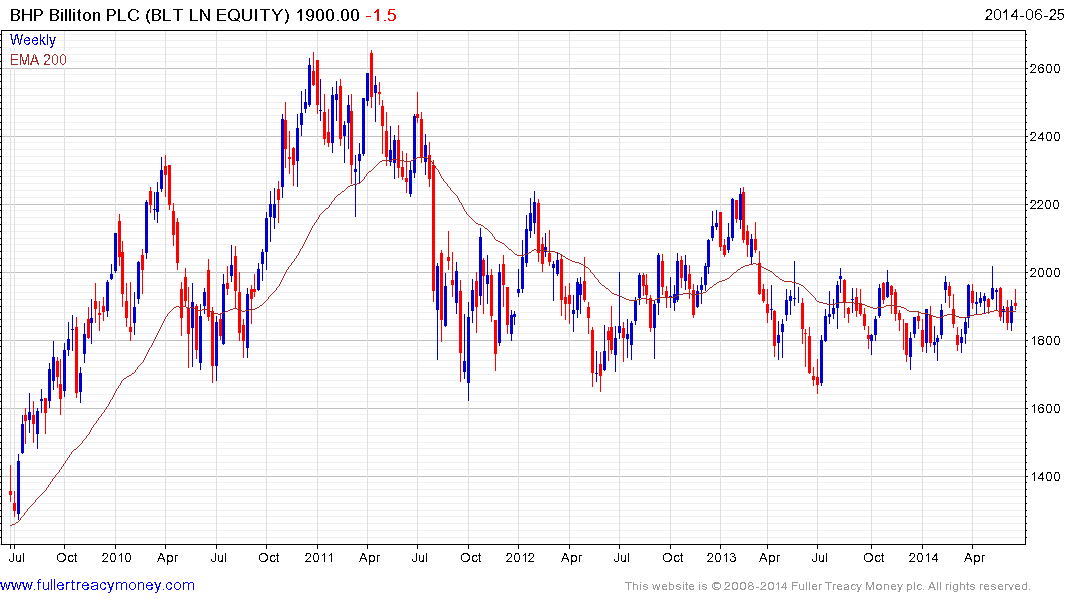 Within the iron-ore sector there is a clear delineation between the three majors and smaller producers. BHP Billiton, Rio Tinto and VALE have been ranging for the last few months while smaller companies continue to hit new lows. 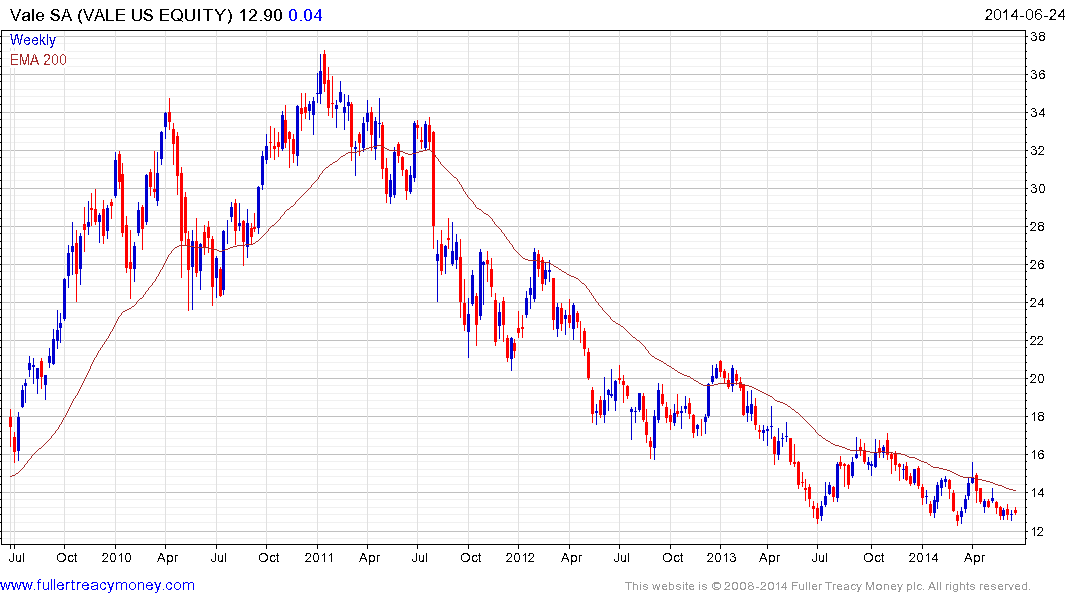 There is a much greater diversity in the performance of coal shares. For example Consol Energy relies on coal for 80% of revenues and has been trending towards the upper side of its 5-year base. 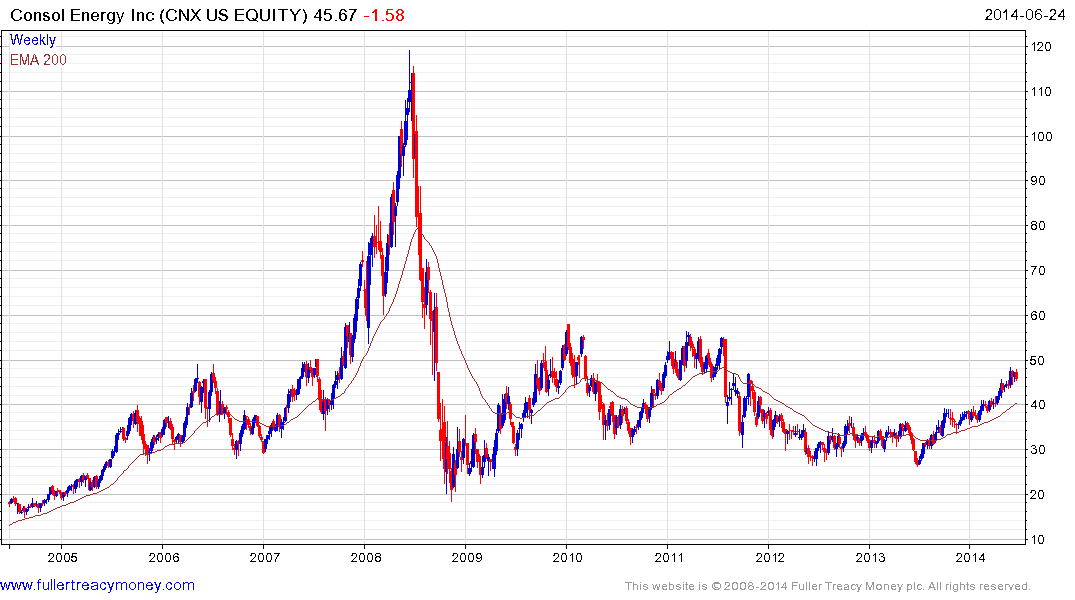 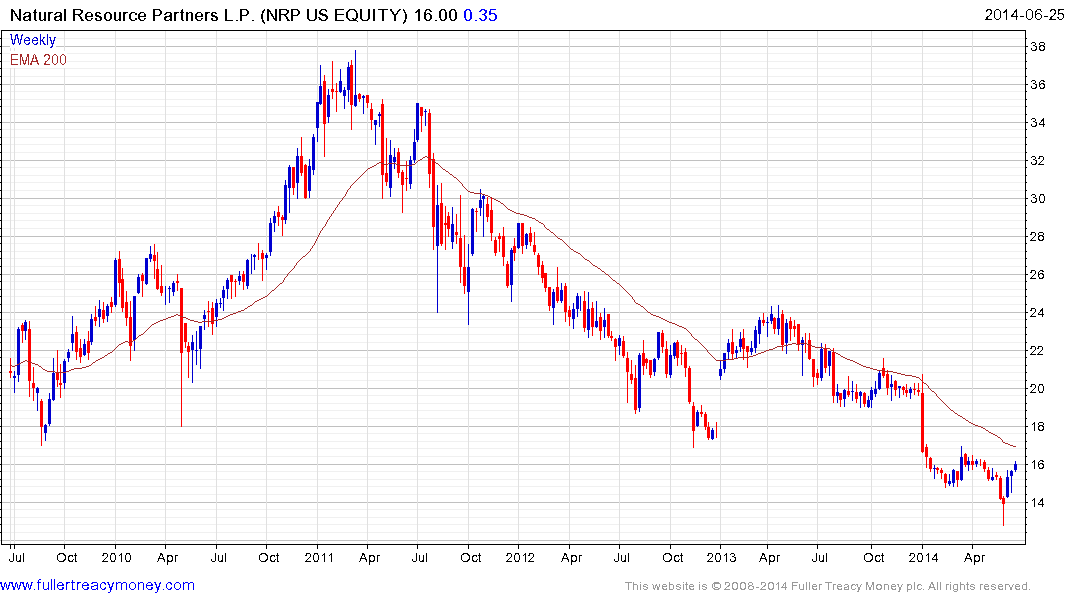 At the other extreme, Australia listed New Hope Corp is accelerating lower and a clear upward dynamic will be required to check the slide and raise the potential for a reversionary rally. 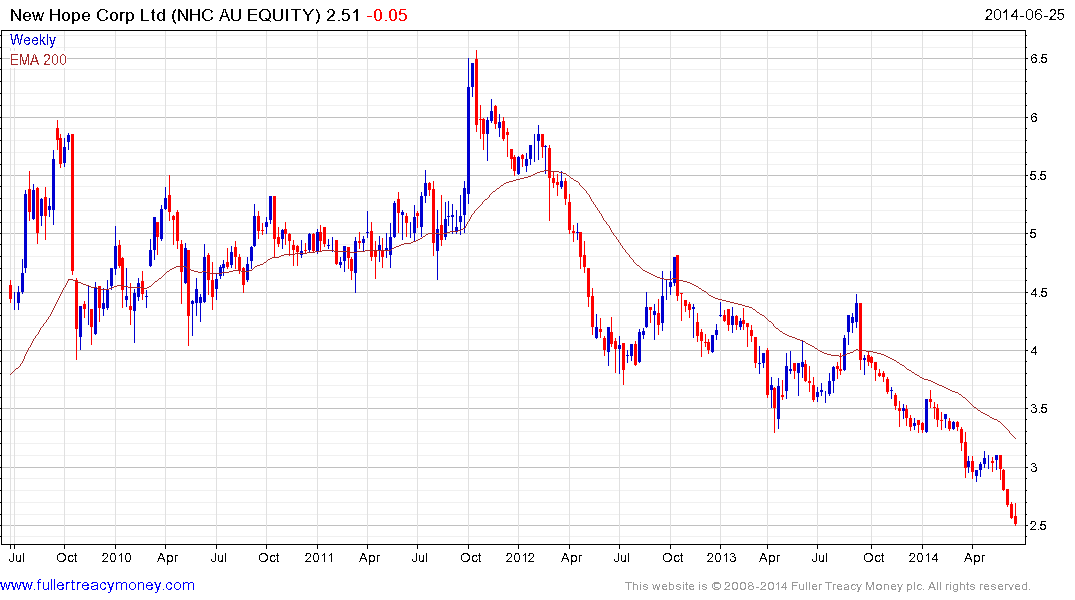 Within the steel sector, speciality producers continue to exhibit relative strength. Allegheny Technologies found support last year near $25 and broke out of its base in the first quarter. 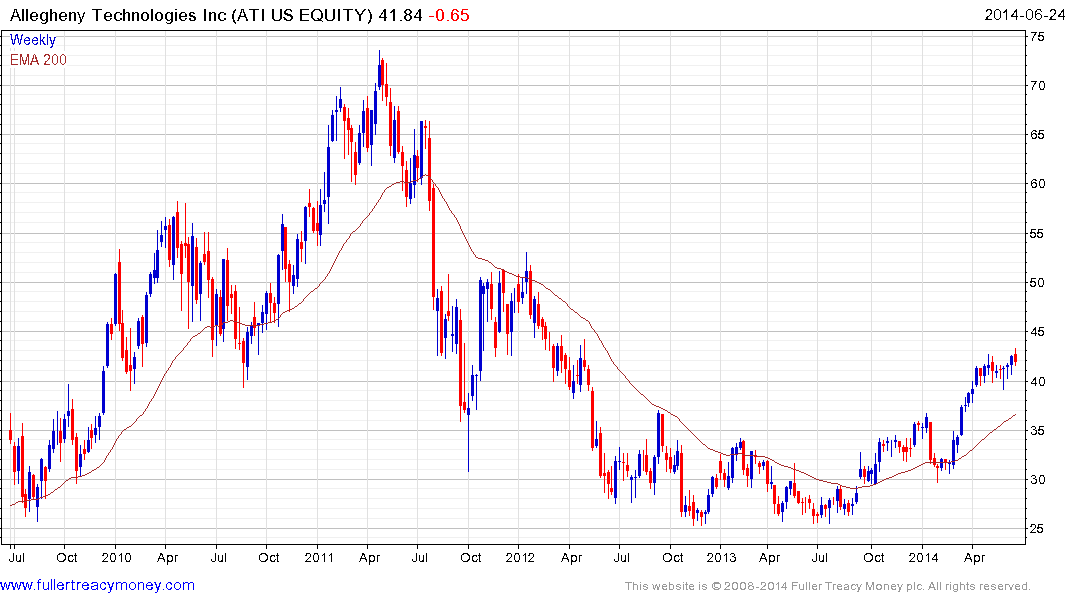 Posco has held a progression of lower rally highs since late 2009 and will need to sustain a move above the 200-day MA to break the downtrend and confirm a return to demand dominance beyond short-term steadying. 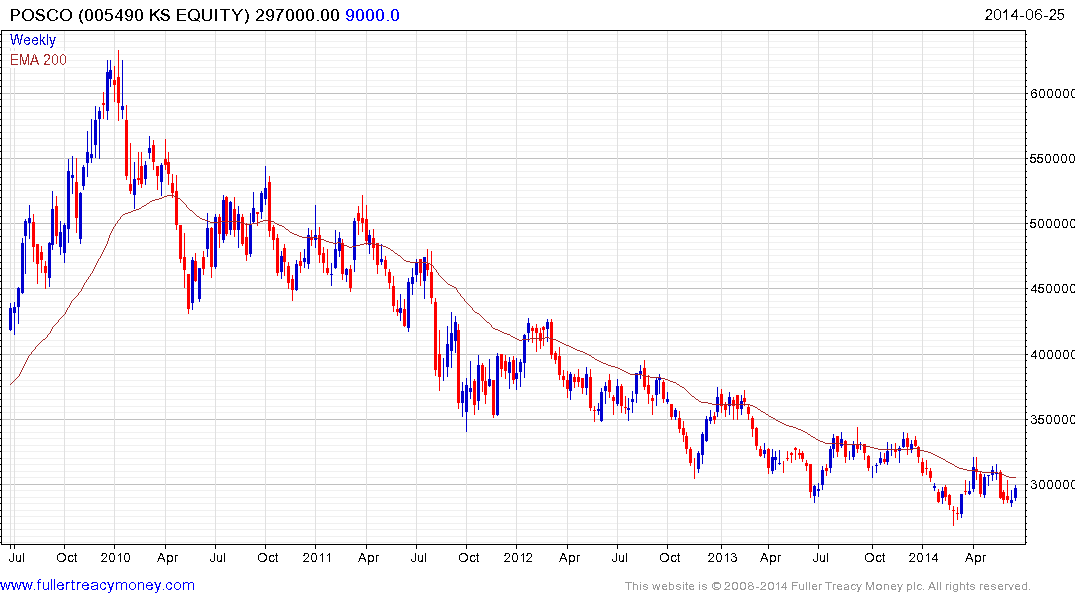 US Steel has been ranging mostly above the 200-day MA for the first time since 2011 and a sustained move below the trend mean would be required to question first step above the base formation development. 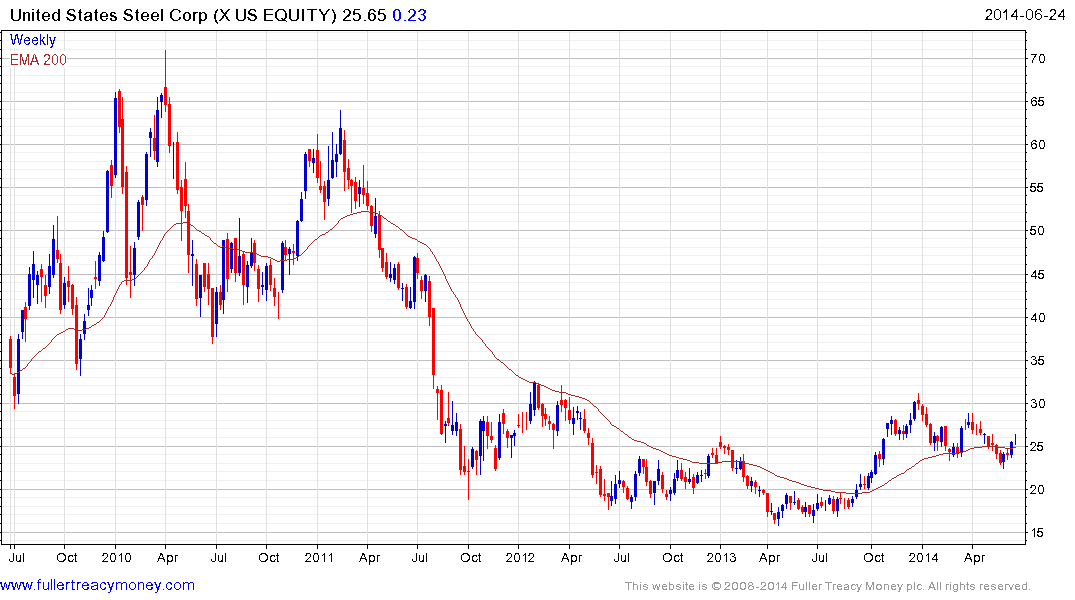