China's purchasing managers index for the non-manufacturing sector fell to 54.6 in December, the lowest since August and down from 56 a month earlier, data released today by the National Bureau of Statistics and the China Federation of Logistics and Purchasing showed. A figure above 50 indicates expansion.

"Money managers took profits off the table,"Chris Weston, chief market strategist at IG Ltd. in Melbourne, said by e-mail. "There will be weakness in global cyclicals today in Asia. It's hard to really pinpoint any bright spots."

The China data added to signs of a slowdown in the world's second-largest economy. An official gauge for factory output released Jan. 1 fell more than economists projected to a four-month low. A separate report published yesterday by HSBC Holdings Plc and Markit Economics showed its PMI of Chinese manufacturing slipped to 50.5 from 50.8 in November, matching the median estimate in a Bloomberg survey of economists.

While China's intention to foster a market oriented economy and consider the environment more prominently in planning decisions is to be welcomed, the ramifications for some of the stock market?¡¥s largest sectors such as banking, materials and building is somewhat uncertain. 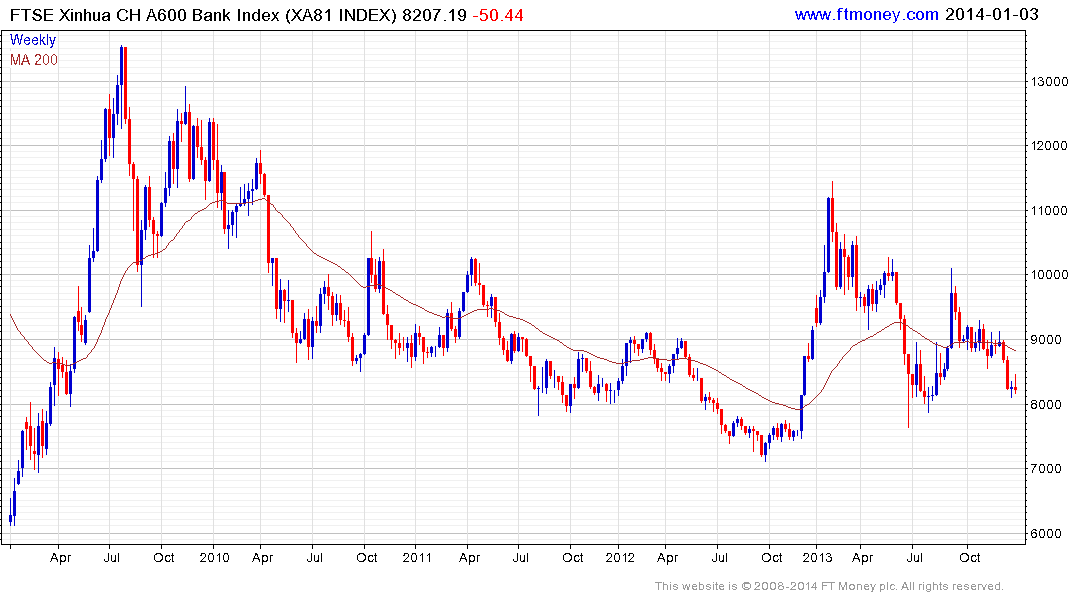 The FTSE/Xinhua A600 Banks Index had been ranging mostly above the 200-day MA following a reversionary move, but broke down three weeks ago and has now returned to retest the July lows. It will need to continue to find support 8000 to check the downward bias and suggest a return to demand dominance.

What does seem clear is that allowing the Yuan to strengthen further represents another strand in the administration's reform agenda with the offshore Yuan hitting a new today. 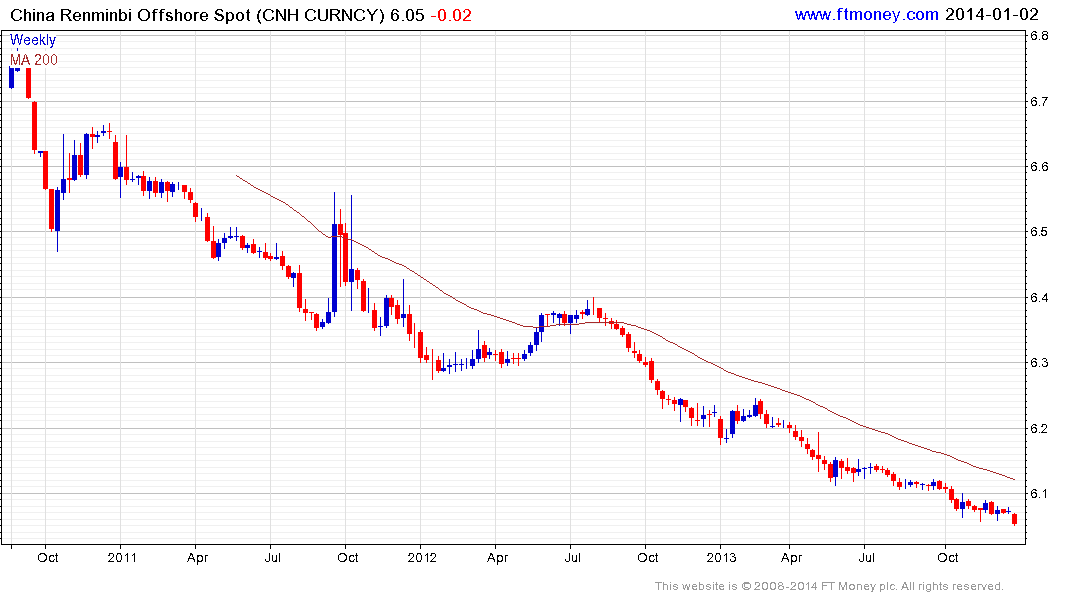 Concurrently, news that the recovery in US housing is gathering pace may be interpreted as a further signal that the Fed's decision to taper last month was correct and that we can anticipate further tapering at the next meeting. 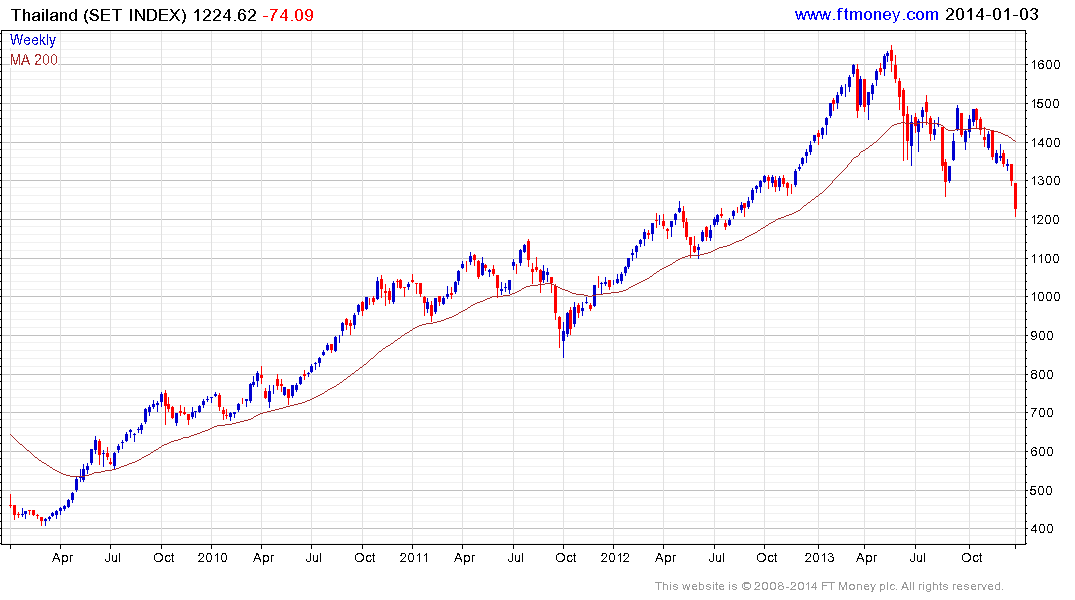 Against this background ASEAN markets remain weak. Although Thailand has political considerations that have exacerbated the stock market's technical deterioration, a general trend of investor angst is evident. Following a steep advance, the Thai SET Index posted a massive reaction against the prevailing uptrend (as taught at The Chart Seminar) in May and spent the last six months ranging below the 200-day MA. It broke downwards again this week and a clear upward dynamic would be required to check the slide. 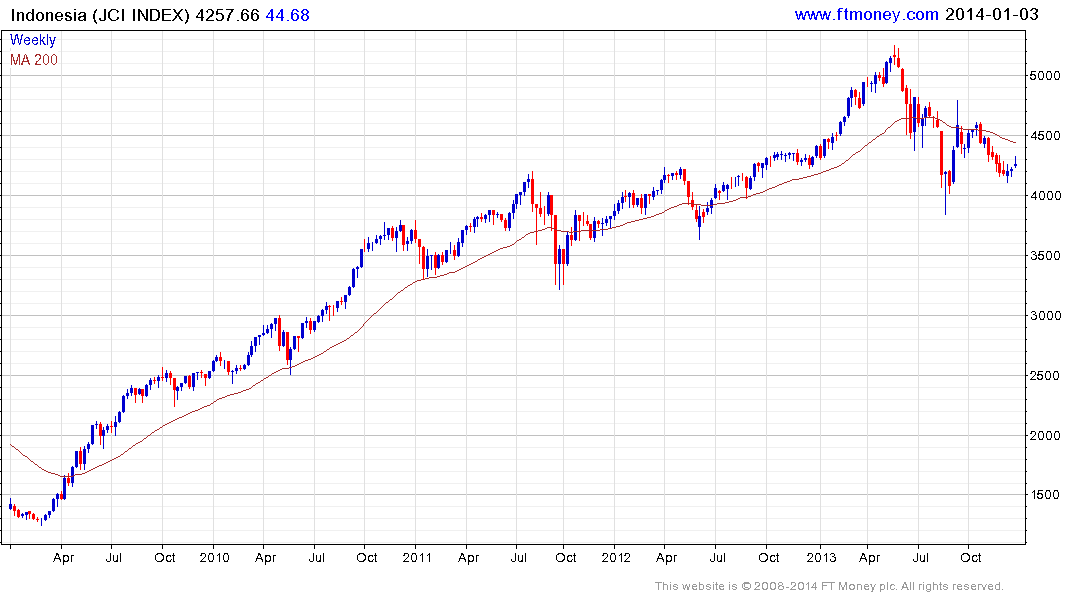 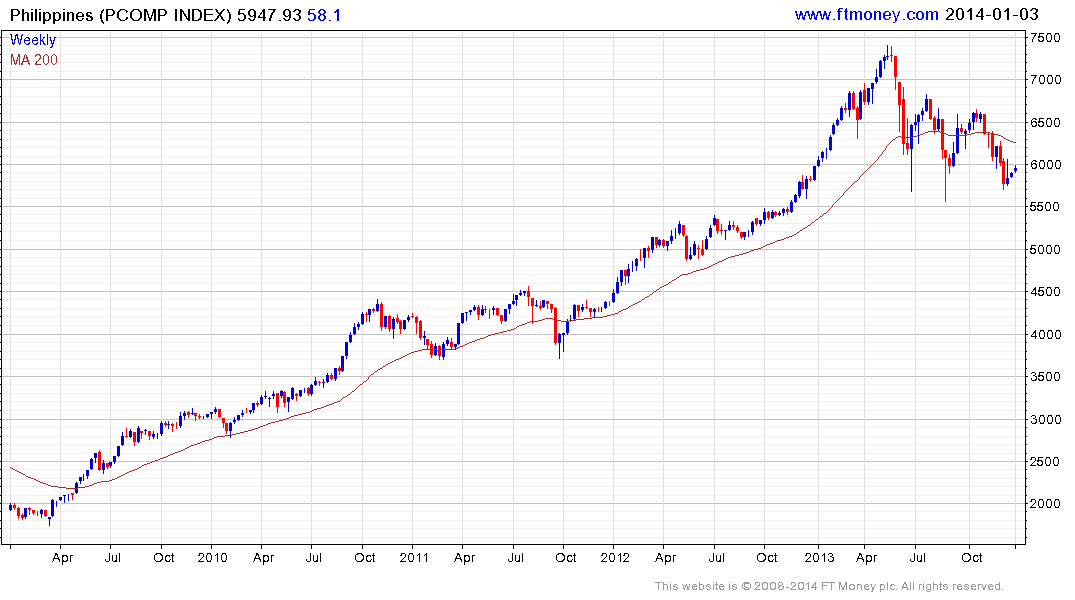 The Indonesian Index has a relatively similar pattern and will need to continue to hold above 4000 if first step below the top characteristics are to be countermanded. The Philippines also shares this pattern. 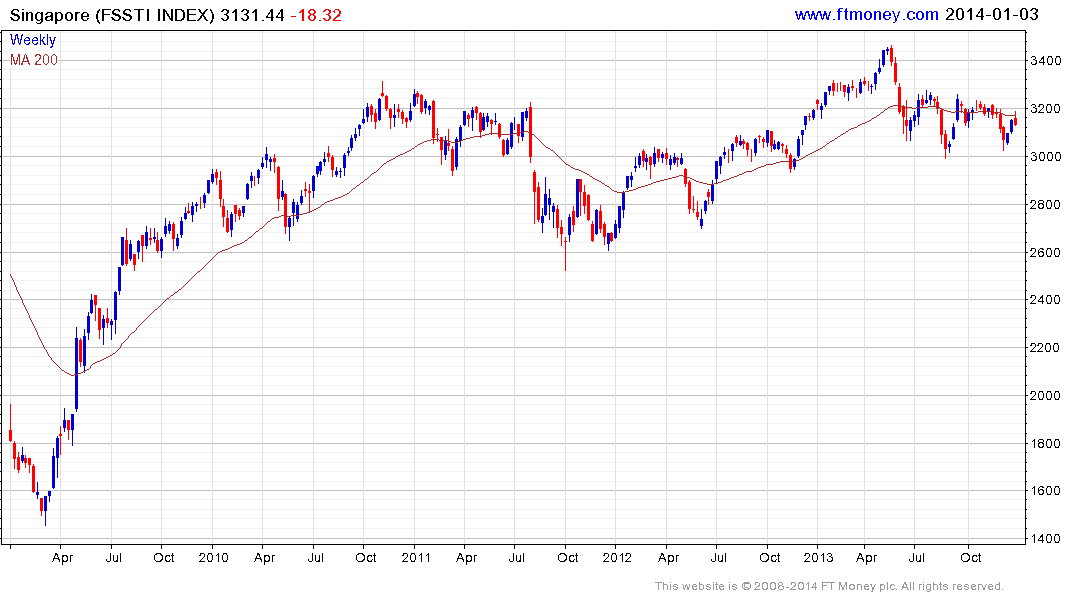 The Singapore market failed to sustain the break above 3400 in May and has been ranging below that level since. It pulled back rather sharply from its most recent test of the upper side of the congestion area today and sustained move above 3400 will be required to reassert medium-term demand dominance. 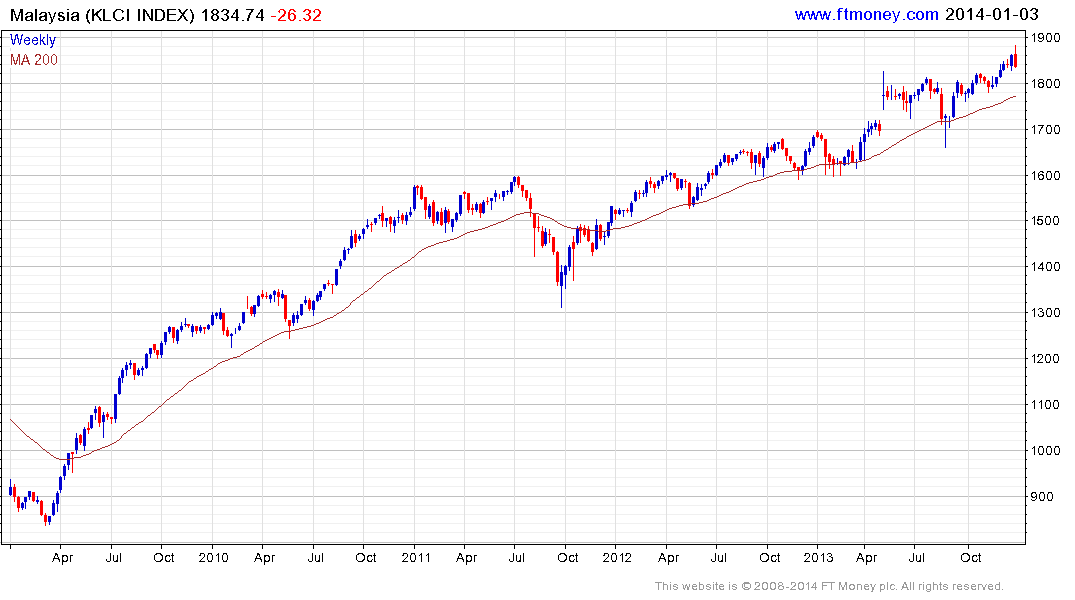 The Malaysian Index was a relative strength outperformer in 2013 but has failed to sustain the break to new highs and pulled back sharply over the last two weeks. At least a reversion towards the mean appears to be underway. The medium-term progression of higher reaction lows, currently near 1750, will need to hold if the overall uptrend is to remain consistent.