The Bloomberg-JPMorgan Asia Dollar Index fell to a six- month low after the U.S. central bank reduced its monthly bond- buying program yesterday by another $10 billion to $55 billion.

The purchases could end in the second half of this year and borrowing costs may be increased around six months later, said Fed Chair Janet Yellen. China’s yuan sank to a one-year low after the nation’s central bank weakened the currency’s reference rate by 0.18 percent, matching a March 10 cut that was the biggest since July 2012.

“Yellen’s comment seem more hawkish than expected,” said Samson Tu, a Taipei-based fund manager at Uni-President Assets Management Corp. “It may take one or two days for the message to be digested before emerging-market currencies can stabilize, and Asian currencies are facing the additional pressure of the weakening yuan.” 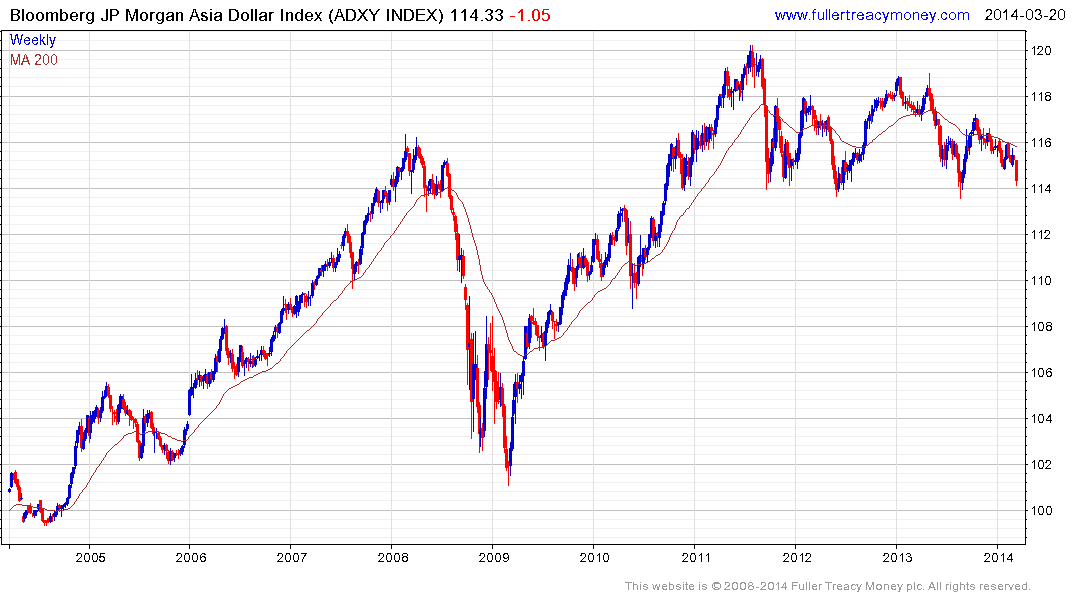 This has created a difficult situation for ASEAN currencies which are now being squeezed by a renewed competitive focus by the region’s two largest economies. The Asia Dollar Index has Type-2 top formation characteristics with right hand extension, as taught at The Chart Seminar, and has fallen to test the lower side of the more than two-year range. A clear upward dynamic will be required to check potential for additional weakness.

Asian stock markets had rebounded from their early lows in conjunction with the firming of their currencies, but could now come under renewed selling pressure as the Chinese Yuan continues to weaken.