Are Cryptocurrencies Becoming a New Asset Class?
Comment of the Day

Are Cryptocurrencies Becoming a New Asset Class? by Eoin Treacy

The volatility also does not lend itself to being a store of value (another agreed upon function of money). Consider that it is not unusual in recent days for the price of the Bitcoin to change by 2%-3% a day. The US dollar, in contrast, rarely moves one percent a day, and while the Bitcoin has appreciated by nearly 50% over the past month, the Dollar Index has fallen 2.3%.

Crypto-currencies appear easy to buy but are more difficult to liquidate. Reports suggest that even modest amounts take days to complete. It appears that a small part of the float actually trades, and the supply is limited. There are around 16.3 mln Bitcoins and 1800 new ones a day.

The rising price for crypto-currencies and new interest does not alter our assessment. These are not currencies in any meaningful sense. To the extent that some retailers accept them is a bit of a novelty and marketing fluke. Some of the larger businesses, like Virgin, who previously indicated a willingness to accept Bitcoins as payment, reportedly convert such payments into hard currencies. It is a gimmick, not confirmation of its currency status.

Leaving aside questions on the origin of money, under conditions of modernity, money facilitates exchange and is used to pay taxes and settle debts. When crypto-currencies can be used to pay taxes, and/or are generally accepted to retire debt, then their money status needs to be reviewed. Under present condition, none of the functions of money are met by crypto-currencies. They are hardly used as a means of payment. They are poor stores of value. They are not units of account.

People can still make and lose money trading them. They are part of the universe of paper assets, with their own niche rules governing supply. One can use some crypto-currencies to conceal transactions, but do not expect the taxman, the landlord or grocer to accept them anytime soon. They are currencies to the extent that contacts on Facebook are friends and that "grande" means medium at Starbucks.

Bitcoin has been discovered by US investors. At least that is what the flow on fiatleak.com tells me. When I was looking at the website in March, China accounted for the vast majority of traffic but today US volumes outpaced China by 5:1. The other largest buyers are the EU, Russia, Brazil and South Africa. 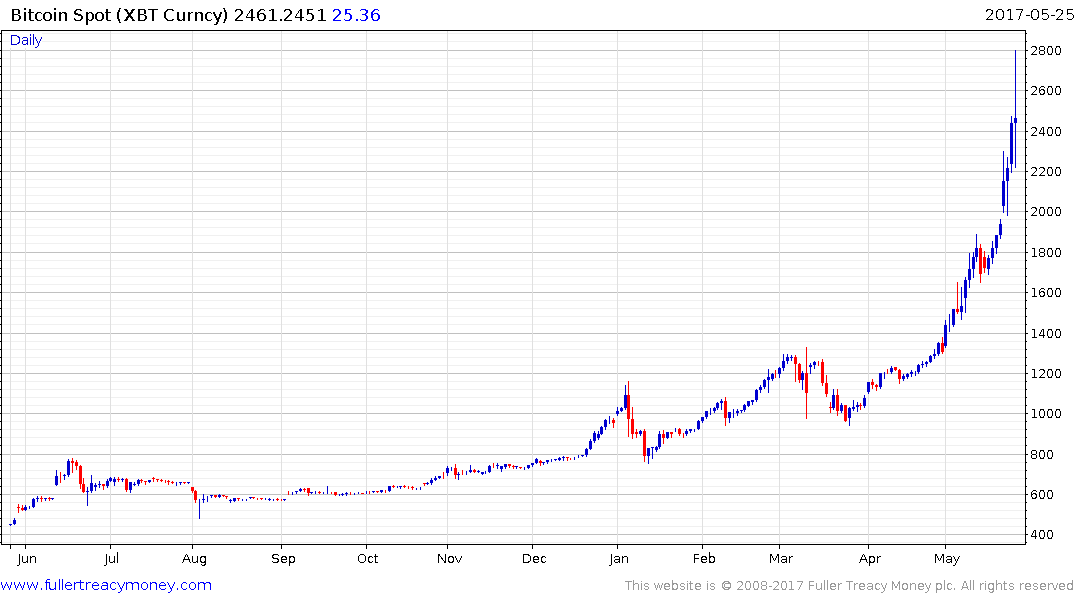 There has been a great deal of noise made about the acceptance of Bitcoin in Japan but from what I can see there is very little trade emanating from Japan. Russian, Brazilian and South African demand might be considered a response to the particular threats to governance and their respective currencies but right now US demand suggests a speculative surge.

Bitcoin is not a currency and its current volatility is a headwind to it being accepted by retailers unless they wish to speculate on price appreciation. That kind of business model is what resulted in a large number of pawn brokers going bust when gold prices declined.

Bitcoin was at $2000 on Monday and hit $2800 today. It was at $1000 on March 31st. This is a classic example of acceleration and today offered the first signal that the world beating run is close to more than a short-term peak.