Apple Inc. on Wednesday joined U.S. companies including Deere & Co. and Walt Disney Co. in a recent sprint to issue new bonds, taking advantage of the steep decline in benchmark interest rates and a surge in investor demand.

Apple launched its first bond deal since 2017, selling $7 billion of debt. All three companies issued 30-year bonds with yields below 3%, a first for the corporate debt market.

The issuance boom is one consequence of a rally in debt that has driven down Treasury yields, which fall as bond prices rise, to near-record lows. Spurred by concerns that slowing growth and a mounting trade conflict will end the decadelong global economic expansion, investors have swept up government bonds around the world, pulling yields in many countries into negative territory. Bonds issued by name-brand corporations give investors a relatively safe alternative that still pays more than government bonds.

Anyone with any sense is either refinancing or issuing debt at these levels. There is a cacophony of people talking about the US following Europe and Japan into negative rates. That is a possibility but the bigger question is when? It does not look likely before the end of the year and in the meantime, there is a wave of corporate and sovereign bond issuance for the market to digest.

Companies capturing record low long-term financing is just sound business and helps to reduce the weighted average cost of capital. The compression in yields offers consumers and corporations the opportunity to refinance at very attractive rates and that puts money in people’s pockets either directly or indirectly through share buybacks or capital expenditure. That represents a stimulus for the economy beyond the $1.2 trillion additional spending agreed to by the Federal government over the summer.

Meanwhile the momentum move in European sovereigns is so overextended that even a whiff of improving trade war news, however tenuous, has resulted in downward dynamics and downside key reversals on the futures markets.

The contract change on the Bund two days ago appears to have been a catalyst for profit taking. Today’s decline breaks the sequence of higher reaction lows and suggests at least some consolidation is underway. 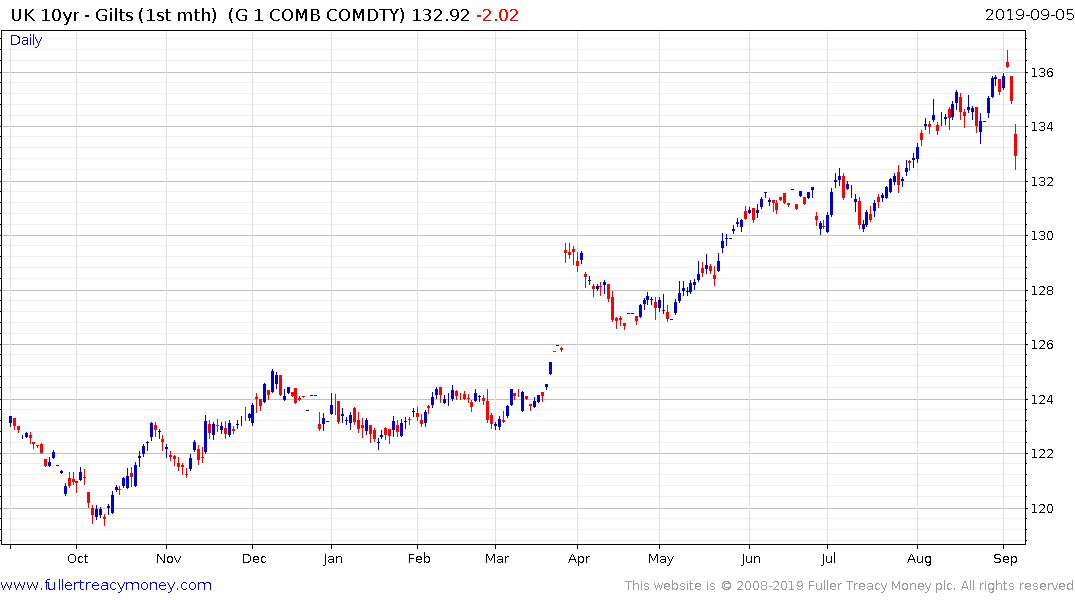 UK Gilts failed to sustain the breakout to new highs on Tuesday and have now returned to test the lower side of the underlying range to form a striking downside weekly key reversal. A sustained move below 132 would confirm a peak of near, and potentially medium-term significance. 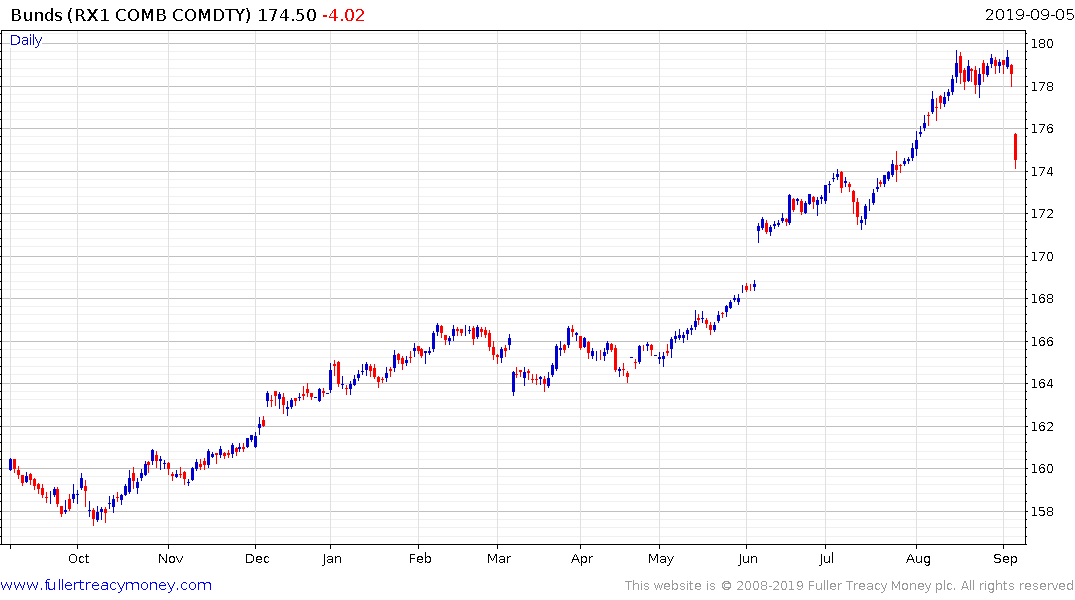 That weakness in government bond futures translated over to less haven demand in the gold market. Silver pulled back from the psychological $20 while platinum paused at the psychological $1000 level. This looks like a pause and consolidation after an impressive run which could last for anything up to a few months. Downside follow through next week would likely signal mean reversion is underway.