Options traders who piled into bullish bets on Amazon.com Inc. this week stand to lose their money today after profit at the world¡¯s largest Web retailer missed estimates by 26 percent.

The volume of calls rose to 113,681 contracts yesterday, the most since October and almost double the trading in puts, data compiled by Bloomberg show. The eight most-traded options were bullish. Calls giving the right to buy the shares at $430 changed hands the most, more than tripling their price to $6.20.

“Everybody got it wrong, seriously wrong,¡± said Jiban Nath, an equity-derivatives strategist at Solo Capital Partners LLP in London. “A lot of people were going by what the analysts say. Amazon all these years had been doing amazingly well. The analysts all got the direction wrong and no one saw it coming.”

A topic we cover at length at The Chart Seminar is myopia. The focus of market participants is becoming increasingly short term, and HFT takes this process to the ridiculous. The problem with this type of market view is that it is all too easy to miss what is happening beyond the narrow scope of intraday trading. 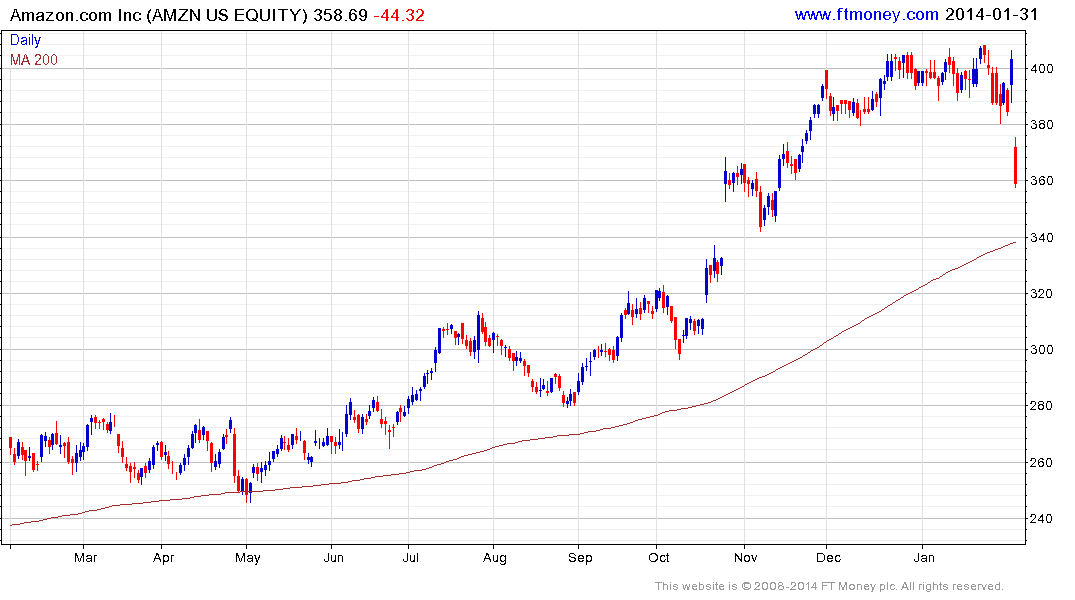 Amazon represents a very telling example of myopia at work. In a bull market investors become conditioned to buy pullbacks because that strategy works. As demand becomes increasingly dominant, the size of reactions often gets smaller because those seeking to buy wait less time to initiate positions. That strategy is self reinforcing for as long as it lasts.

However, we have long said that mean reversion is the closest thing you get to a natural law of psychics in the social science of markets. As prices become increasingly overextended relative to the 200-day MA, the potential for a larger pullback increases. This is despite the fact that many of those who are buying only think about the potential for additional upside.

Yesterday’s rally represented business as usual for anyone who initiated longs. That complacency was challenged today as stops were hit and suggests that the anticipated mean reversion in Amazon is underway.

However large the pullback on a share like Amazon it is unlikely to be enough to market sentiment on its own, particularly when the S&P is only down 3.8% from its peak despite increased volatility and there are good examples of impressive rallies taking place in other shares. 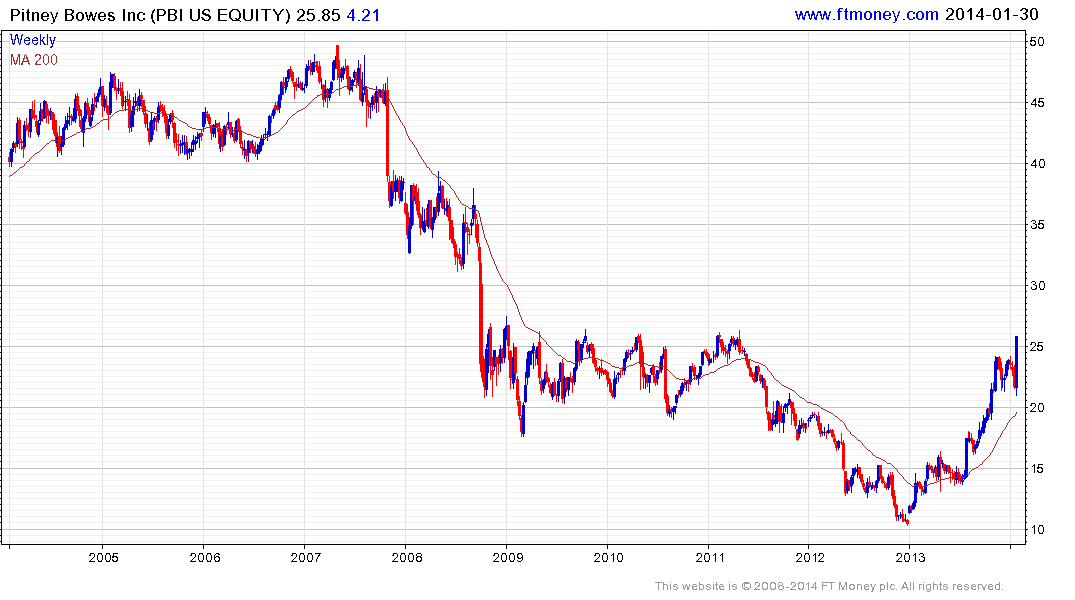 For example Pitney Bowes rallied impressively yesterday from the region of the 200-day MA to reassert the medium-term uptrend. However the size of the rally was so large that some consolidation is likely before long, albeit in the context of what remains a consistent advance.

On aggregate, the potential for the wider market to continue its process of mean reversion remains the base case.