“The opportunity is huge,” said Jasper Cheung, president of Amazon Japan. “We have already increased the selection that we can export by the millions over the last several weeks.”

Chinese shoppers are looking for authentic Made-in-Japan products, spooked by tainted baby milk and fake merchandise proffered on web stores in China. While that’s helping to drive an influx of shoppers to Japan -- 3.08 million Chinese tourists have visited the archipelago so far this year, up 41 percent -- it’s also boosting demand for Amazon.co.jp, Wandou and other web outlets featuring Japanese goods.

Rakuten Inc., the Japanese online store, also lets people shop for stuff from Japan in Chinese, as well as in Korean and English. Amazon’s Japan website has been available in English for years.

?The new iteration of Amazon Japan’s shopping portal, in simplified Chinese, offers millions of products with more coming, the company said. Consumers in Asia’s biggest economy are demanding access to authentic brands and quality, from clothing and cosmetics to baby products and health goods. That’s why Costco Wholesale Corp. has a shop on Alibaba’s Tmall.com, while Macy’s Inc. and other U.S. retailers are tapping into China’s dominant online-payments system by accepting Alipay on their sites.

For billions of new consumers entering the middle classes their first taste of consumerism is likely to be via their mobile phones where they are aggressively marketed to via Wechat, Facebook, Instagram and a host of other social media sites. That puts dominant online marketplaces like Amazon, Alibaba, Ebay and Rakuten in a favourable position to compete for their business and China represents a major battleground. Uber’s experience in China highlights the difficulty of doing business in that country where one is competing with a domestic copycat operation. Amazon’s strategy of building out its Japanese operation may act as a hedge to domestic Chinese operations where it competes directly with JD.com and Alibaba. 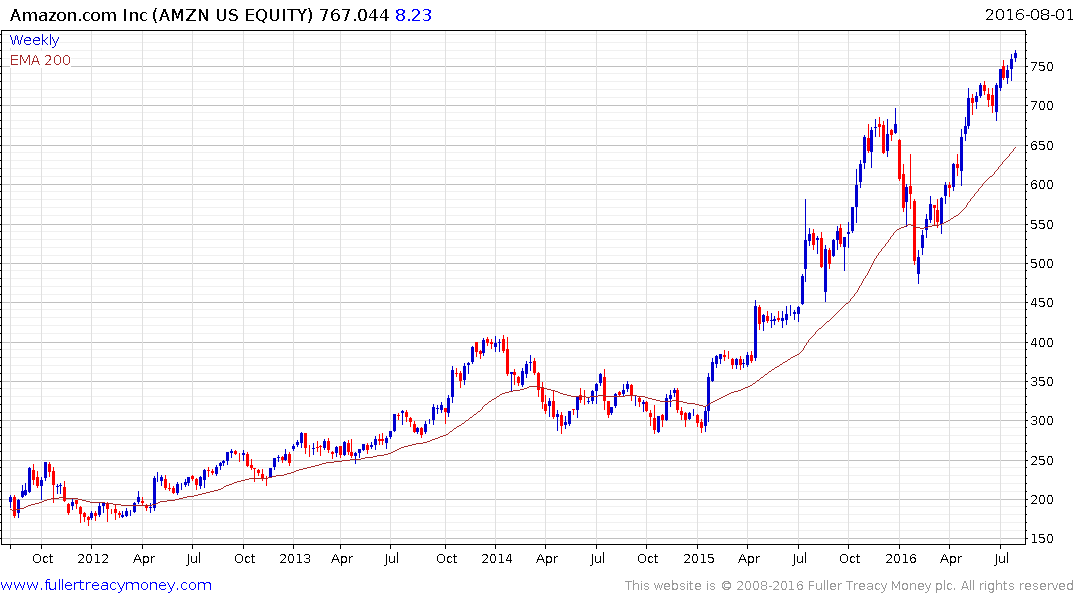 Amazon has jumped more than 50% since January but continues to hold a progression of higher reaction lows which would need to be broken to question the consistency of the advance. 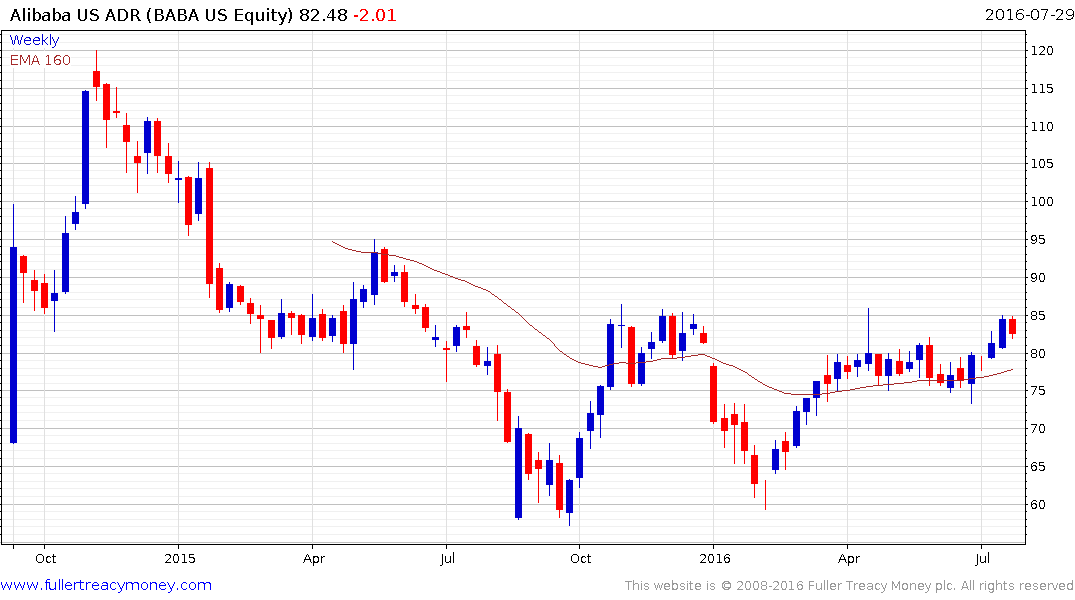 Alibaba has been consolidating mostly above its 200-day MA since early April and is now pressuring its October highs. A clear downward dynamic would be required to question potential for additional upside. 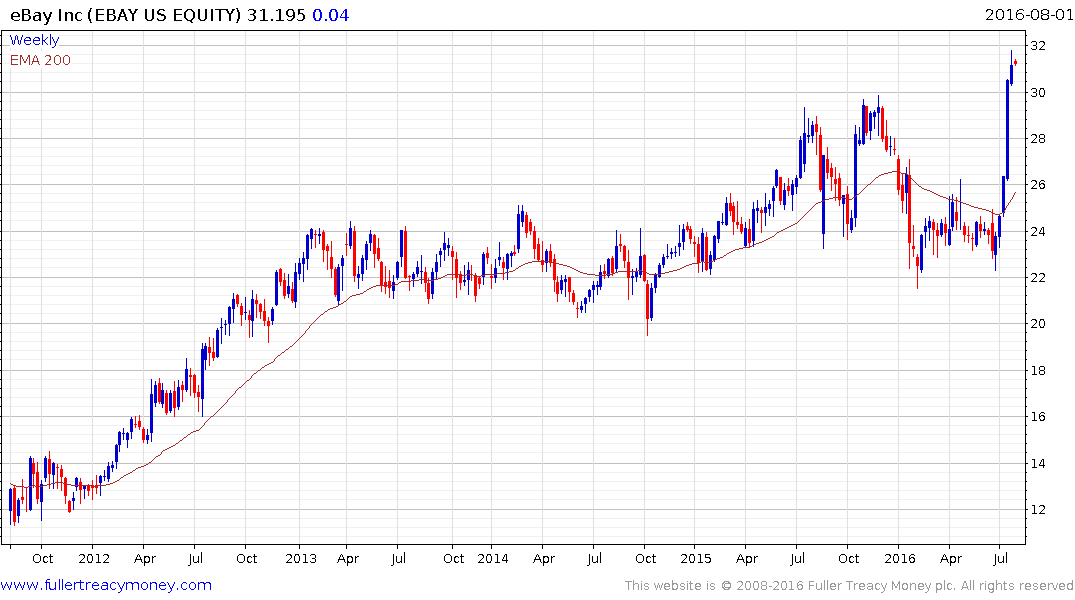 Ebay surged following its Q2 earnings announcement in late July to hit a new high. While somewhat overbought in the short-term, a sustained move below the $25 area would be required to question potential for additional upside over the medium term. 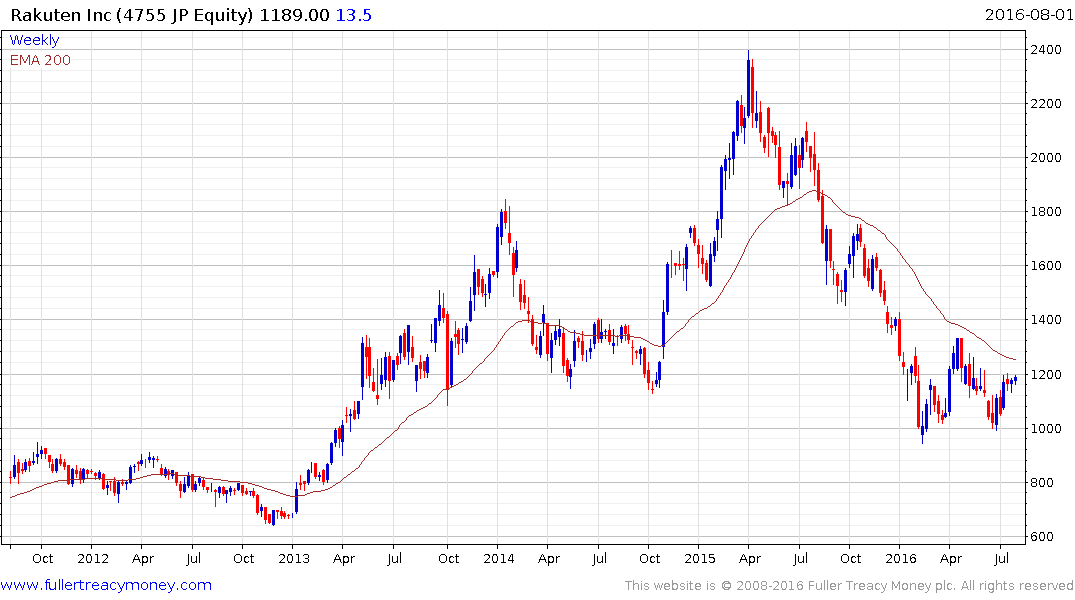 Rakuten collapsed in 2015 but has at least stabilised near ¥10 and is now testing the region of the trend mean. A sustained move above it will be required to signal a return to demand dominance.