Amarin Fish-Oil Heart Drug Will Be Big, Could Be Huge
Comment of the Day

Amarin Fish-Oil Heart Drug Will Be Big, Could Be Huge by Eoin Treacy

Part of that question was answered Thursday after a panel of experts convened by the Food and Drug Administration reviewed Amarin's data. They voted 16 to 0 that Vascepa was safe and cuts cardiovascular events. The vote doesn’t bind the FDA, but the agency often follows panel recommendations, so it would be a surprise now if the drug isn’t made available to more Americans. That’s big news for Amarin — and for many patients.

We still don't know exactly how good the news is, however, and won’t until the FDA makes a final decision by the end of the year. There was consensus on the drug’s overall effectiveness. Still, the panelists disagreed about how far that impact extends. Access for millions of additional patients and billions of potential sales are still up the air, which means there’s more volatility ahead for Amarin investors. The market seems focused on the positives for now: Amarin shares surged 7% in early trading Friday after rising more than 20% on Tuesday, when the FDA released briefing documents ahead of the panel that were seen as relatively supportive for the drug.

Mrs. Treacy is genetically predisposed to pancreatitis during pregnancy and has had a couple of episodes in between pregnancies which have required hospitalisation. The cardiologist who implemented a treatment plan to contain her hypolipidemia during her last pregnancy prescribed a massive daily dose of fish oil and it worked. Every time since then she has found fish oil acts as a salve to pancreatic pain which has ensured she has not been hospitalised in six years. 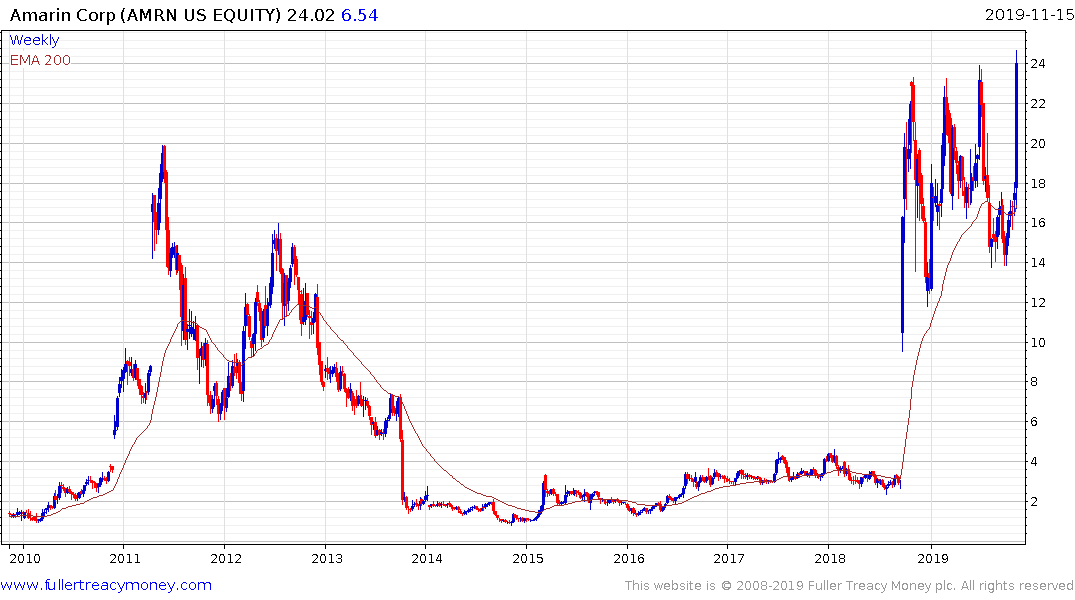 Amarin is back testing the upper side of a 12-month range and a clear downward dynamic would be required to question medium-term scope for additional upside. The immediate question that comes to mind with a speculative venture such as this is why their drug works better than some fish oil capsules?