After the Fork: How Competing Bitcoin Cash Blockchains Might Wage War by Eoin Treacy

In effect, Wright sees the upcoming split in terms of bitcoin’s longest chain rule – the underlying bitcoin consensus mechanism that defaults to the longest chain in the event of multiple blocks being found simultaneously.

When applied to a blockchain split, what this means essentially means is a fight to the death between the competing chains, where the last one standing would be considered the “true” bitcoin cash by nodes.

For example, both implementations have declined to add so-called “replay protection,” or code that allows funds to be safely spent when a split occurs.

“Neither Bitcoin SV nor Bitcoin ABC have implemented transaction replay protection, as the intention is for only one chain to survive,” nChain, the software company behind Bitcoin SV, wrote in a press release published earlier this month.

This means that without special precautions, users could lose funds while transacting on a split chain. Similarly, hackers can exploit the vulnerability to extract funds from exchanges.

“Users potentially stand to lose money because of this decision,” Chris Pacia, a developer for OpenBazaar, told CoinDesk, adding: “Not adding replay protection is a dick move.”

And there are other ways that the two blockchains could continue to wage war following the fork – especially if one camp continues to dominate the hash power.

At the time of writing, the prevailing hash rate is showing a preference for the SV side. If the preference continues, there’s a host of ways that Bitcoin SV could try to keep ABC from operating.

I’m not going to pretend I have a clear understanding of what is being discussed in the above article. I certainly could not explain it to a dispassionate third party. However, there is one clear conclusion we can reach, an attack is underway on the confidence people have in bitcoin and that is being reflected in the price. 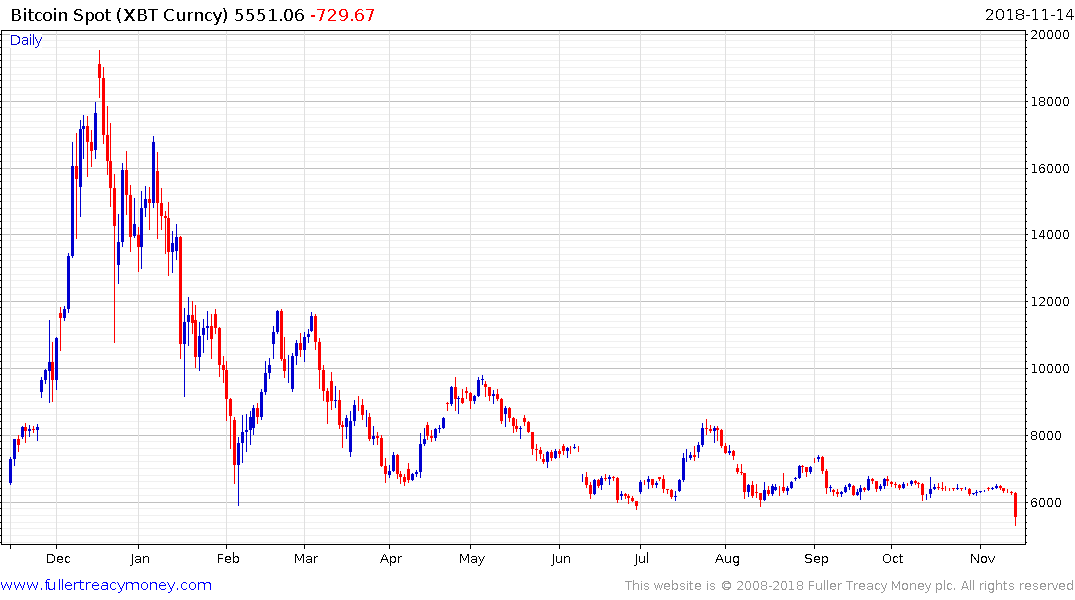 A progression of rally highs has been evidence since the peak in December. While the lows near $6000 had held, the inert nature of trading suggested when volatility returned it would contribute to a significant breakout. That has now been downwards and clear upward dynamic will be required to question downside potential.