A third supplementary budget is on the drawing board to reconcile current-year spending and revenue figures, according to government officials familiar with the talks who asked not to be named per ministry policy. As to whether it goes beyond being a clerical package and takes on stimulus measures, that’s a function of what happens with politics, they said.

A policy shift at the Bank of Japan and doubts about how much more Abe will accomplish in structural reforms is likely to increase pressure for a fiscal fillip.

"We can’t put any more pressure on monetary policy, so the government will have to do more with fiscal spending," according to Koya Miyamae, an economist at SMBC Nikko Securities Inc.

Yet tax revenue for the 12 months ending March 31 is likely to be lower than originally expected, as economic growth has been weaker than initially forecast, and government debt is already about 2.5 times the size of the economy.

Japan’s budget deficit was 5.8 percent of gross domestic product in 2014, compared with 3.9 percent in the U.S.

Asked about the need for another stimulus package this fiscal year, LDP Secretary General Toshihiro Nikai said last month it was "one option," according to Kyodo News.

Trump has indicated he’ll spend $550 billion on infrastructure, with his plans forecast to add more than $5 trillion in debt.

Satoshi Fujii, an adviser to Japan’s Cabinet Office, advocates looking at more fiscal stimulus as part of efforts to escape deflation. He said in a telephone interview on Nov. 11 that a third extra budget this year and a large initial budget next fiscal year may help Japan "fit very well with Trump’s policies."

By marrying itself to a target for JGB yields the Bank of Japan has made its monetary contingent on the market. Therefore the government is now under more pressure to stimulate through both spending and reform in order to revitalise growth. A weaker currency could certainty play a part of that strategy. 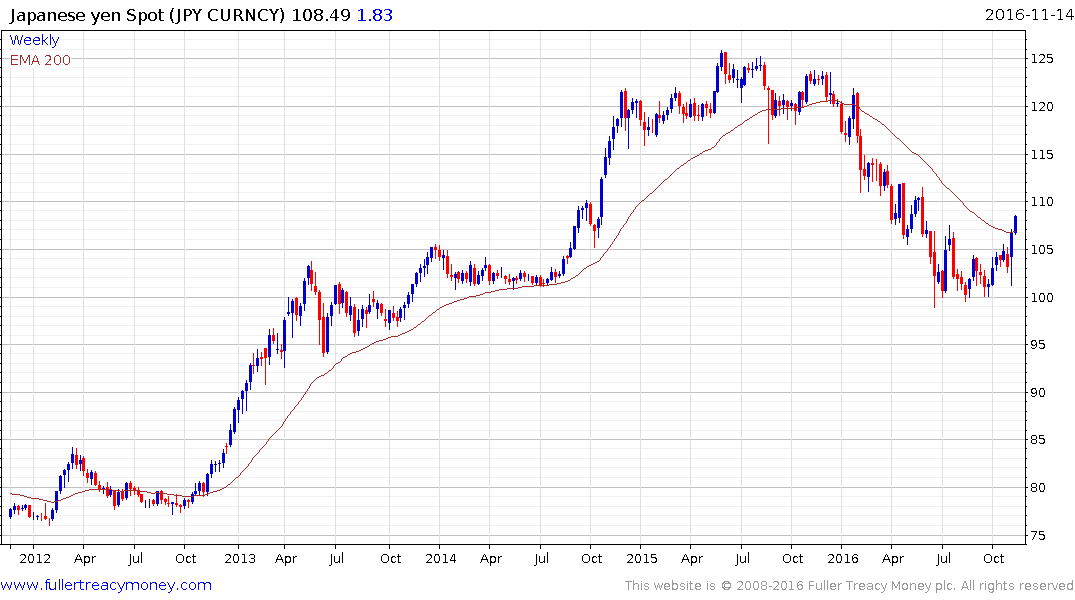 The US Dollar surged through ¥108 today to break a medium-term progression of lower rally highs and reasserted demand dominance beyond short-term steadying. It’s somewhat overbought in the short term but provided it holds the majority of the advance during any pullback we can probably conclude a change of trend has occurred. 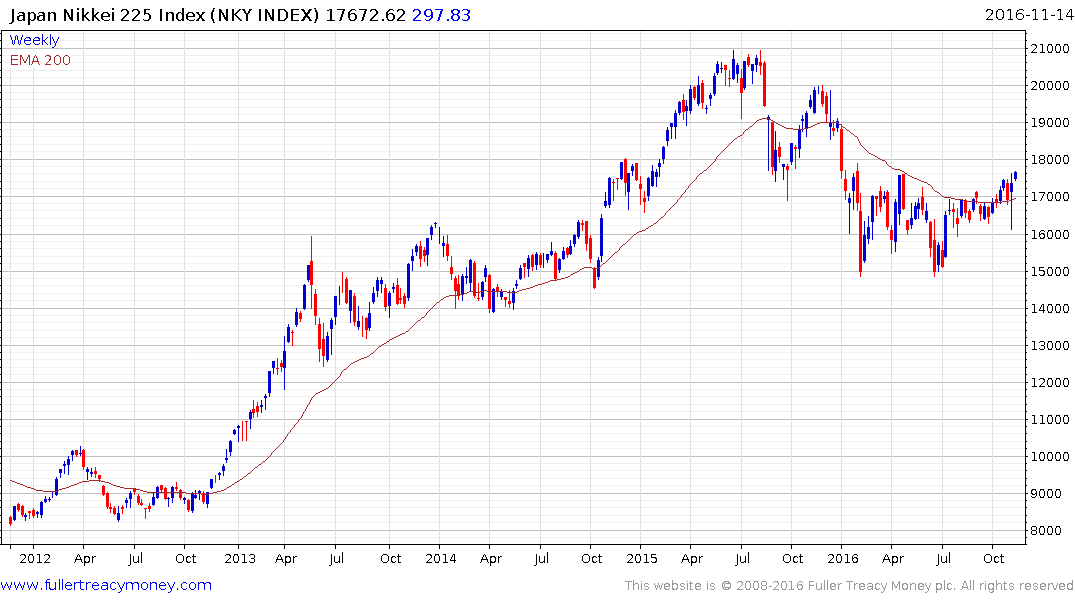 The Nikkei-225 has exhibited a strong correlation with the spot rate and renewed Yen weakness may signal an additional leg up for nominal stock prices. The Index hit a new recovery high today and a sustained move below 17,000 would be required to question recovery potential.